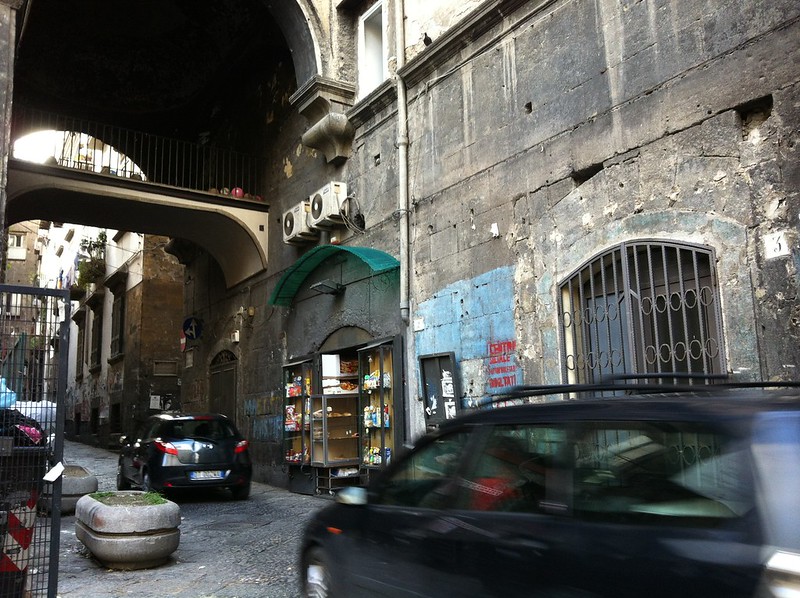 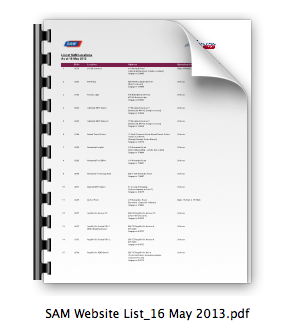 The Cars of Napoli

I’ve finally met my match – Naples has been the first city in which I did not see a single surveyor mark on concrete. Because I did not get to see much modern concrete in it. It seemed as if everything was ancient stone. We had the fortune of staying with our very lovely airbnb host, Gianni, in a historical part of Naples. We were situated along Via del Tribunali, an ancient road used by the Greeks and later the Romans, which meant that nearly everywhere we wandered in the vicinity of the flat was built upon exceedingly ancient cobbles, and by cobbles I do mean the unwieldy, ankle breaking sort. The kind that’s black and absurdly rounded with centuries of wear and tear, set in with deep grooves.

These ancient roads also seemed scarcely suitable for cars, the sound that the cars make on them is horrific; to be honest until I had come to Italy I had not fully comprehended the extent to which cars could seem like a scourge on society in an old historic city. The ancient streets were not designed to accomodate cars at all, and since the area was already so precious and historic, no severe modifications were to be made to the roads besides a series of metal dividers that might be inconspicuously erected along terribly tight passageways and corners in order to protect pedestrians. Nevertheless one still felt seriously threatened upon hearing the amplified roar of vehicles over the hardened cobbles; pedestrians could still expect to come within a hair’s width of the vehicles that wound dangerously and speedily through the streets of Naples, as if they had no fear of death.

The metal dividers were frequently squashed and bent, scooters and cars sped through tiny single-lane streets at break-neck speeds, local pedestrians continued on their merry way and milled about in all directions next to endless traffic whilst us mild-mannered city-cupcakes stood removed and plastered along the edges of the buildings, being horrified at what seemed to be a complete disregard for common sense and road safety. 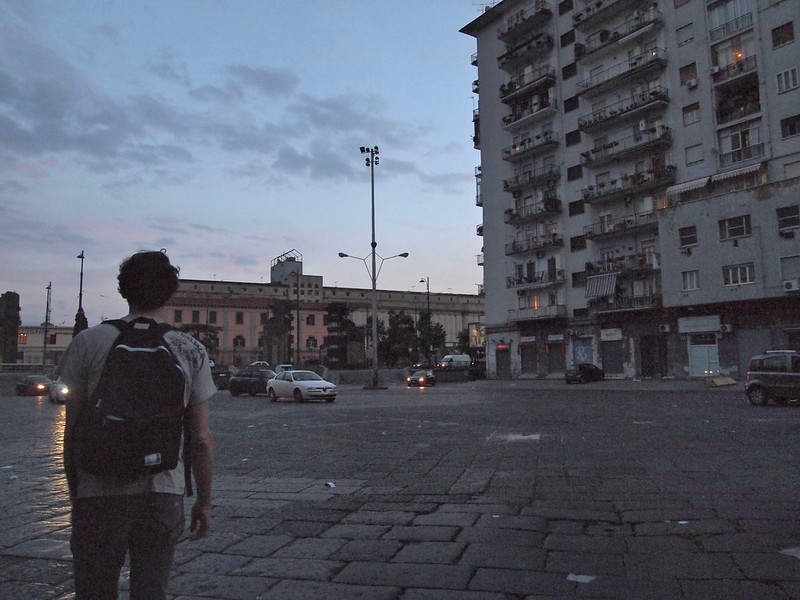 And in some cases, no lines at all… OH! Let me guess, so we can be hit from all directions?
Not only were the drivers incredibly reckless, another thing we noticed in Naples was the severe state of damage that had been inflicted on the drivers’ everyday cars. The amount of damage to cars being tolerated by their owners was staggering. You would never see a car with such damages running on the roads of Singapore (or most cities). But it seems the only bar to having a car in Naples is simply having a car that still runs. 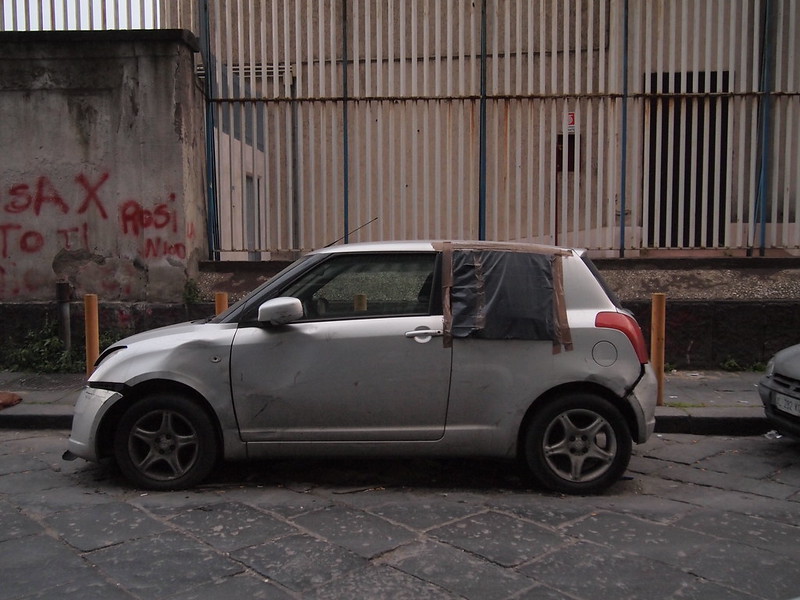 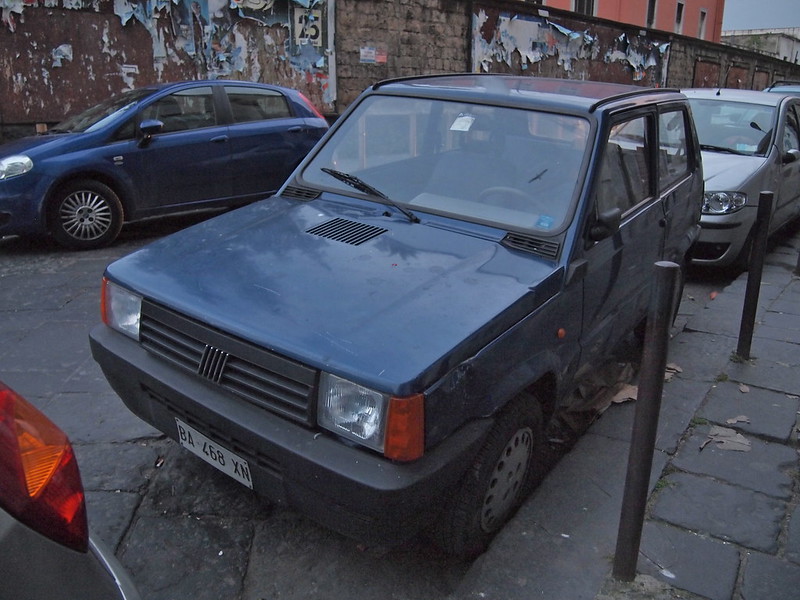 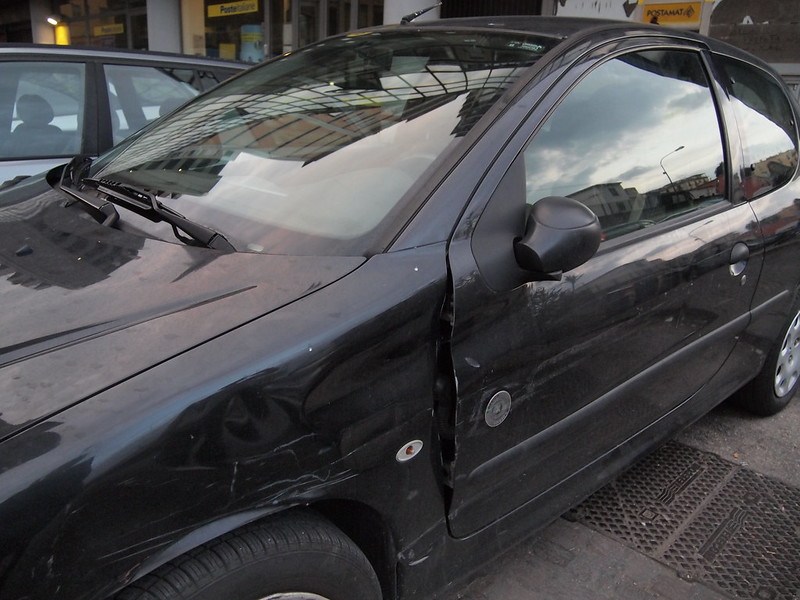 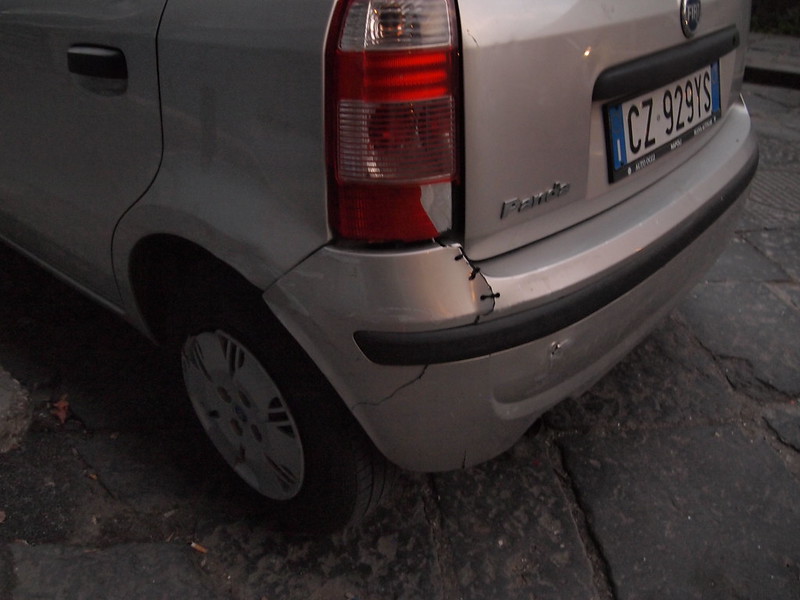 From another day: another fixed rear window… 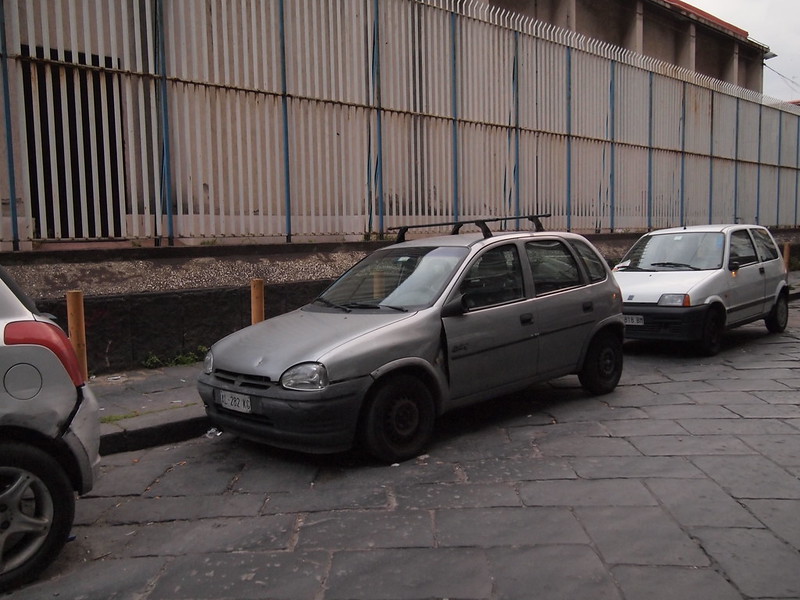 Most of the photos from this post were taken one on particular random road. Nearly every single car was damaged. This was a little bit after we had seen a car collision, and both cars had paused, and I had expected the drivers to come out and exchange numbers. But nothing of the sort happened. It being Naples, a little accident was almost instantly forgotten, and I realised the drivers were only trying to find a way to maneuver themselves away from their collision point so they could continue on to their respective destinations. We were stunned. On the next road, we saw a long row of parked cars and observed them, and came away with the assessment that almost every car seemed damaged in some way. And most seemed to be running…. well, most… 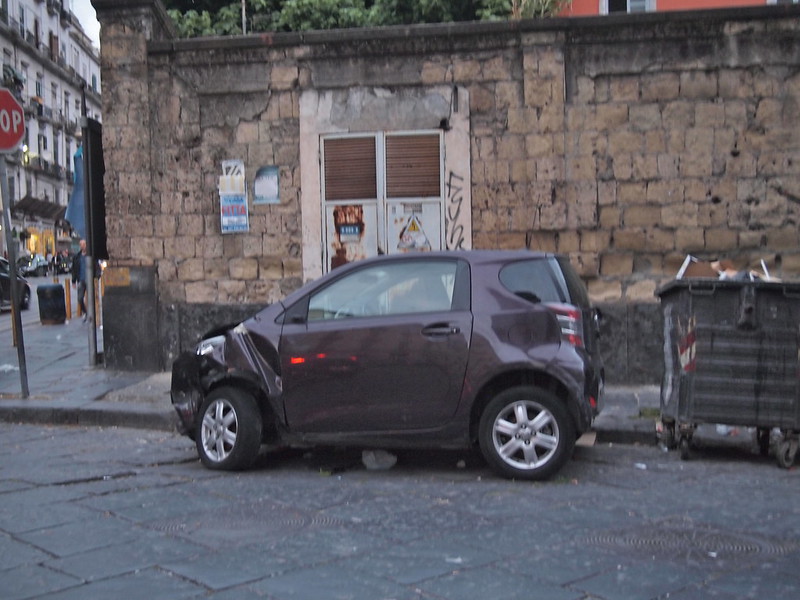 “Oops, crashed my car again, no biggie, guess I’ll just leave it next to a dumpster…”
I don’t really want to know who or what they’ve been hitting with their cars but let’s say I don’t think I’d ever want to drive in Naples looking at the state of all the cars there. I think Naples wins the prize for having the “Most Horrifying Drivers in the World”. And the “Most Badly Damaged Cars Which are Unaccountably Still Running on Roads”…

Had the opportunity and good fortune to visit the Venice Biennale 2013 at the end of May, hence the long hiatus from writing here. I just got back from travelling through Venice, Naples and Rome, so after I gather myself… even more epic posts to come! 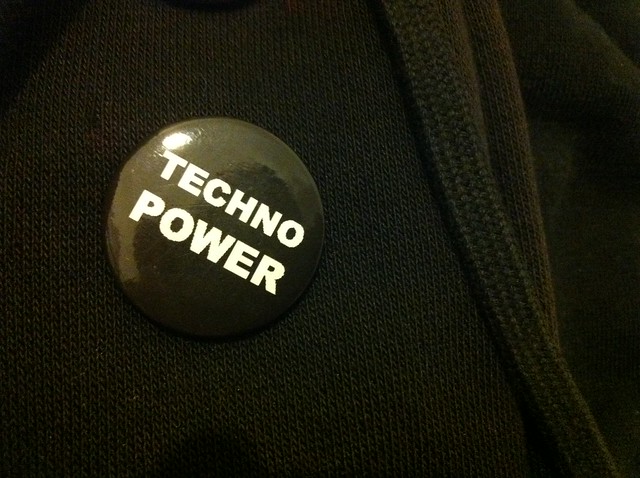 This is a blog to collect DBBD’s various hobby experiments so that I can archive, sort, and filter…
Debbie Ding

I just did the Unity Certified Associate Game Developer exam and passed it. Aight, I know this is…
Debbie Ding