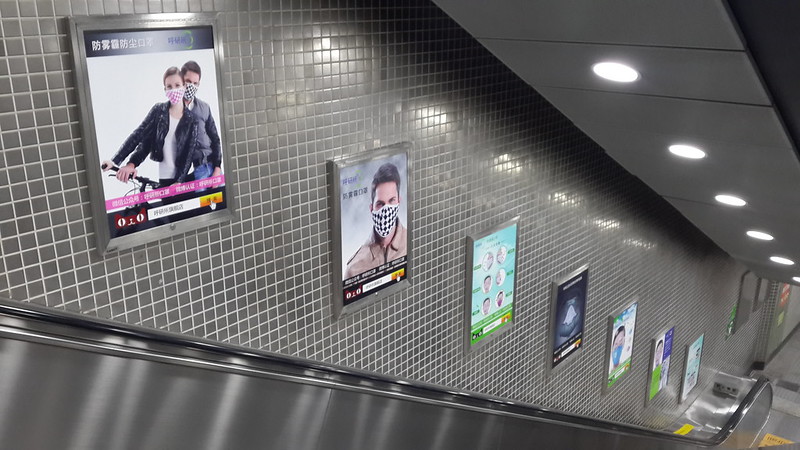 Another quirk of China’s pollution problem: this scene at one of Beijing’s strangely monochromatic subway stations (which seem to present entirely in only grey and black and gunmetal). I realise how strange it looked after I came home and went through the images; it was as if the colour had been edited out from the rest of the image – the only colour you see as you ascend to the surface on the escalators coming from this series of advertisements, touting face masks to protect you from pollution whilst keeping you… er… fashionable? I’m not quite sure – the visual language of the posters is strangely subtle and minimal, something I am not accustomed to. To me its simplicity almost makes it parodic, like as if it were the slap-bang work of some (ahem) ‘speculative’ designer quickly slapping together a few gradients, petals and stock images, dreaming up a quick sketch of an alternative post-apocalyptic universe in which some terrible pollution appears plagues the city forever and the city is unrelentingly grey and sapped of colour forever and the protective facemask becomes everyday wear. But I’m overthinking it. I think that was what initially turned me off Beijing the first time I visited it briefly was that it was just so shockingly colourless and the pollution was so bad that I couldn’t see buildings into the distance anymore; it makes me angry that there would be people and businesses with such selfishness and thoughtlessness for the environment that the sum of the pollution they were all pumping out was clearly afflicting and damaging the health of so many people and other living things. This time around I was glad to see that the city still had some good days when the pollution lifted for a brief spell, and the streets could be full of colour.

The Keywords of Beijing