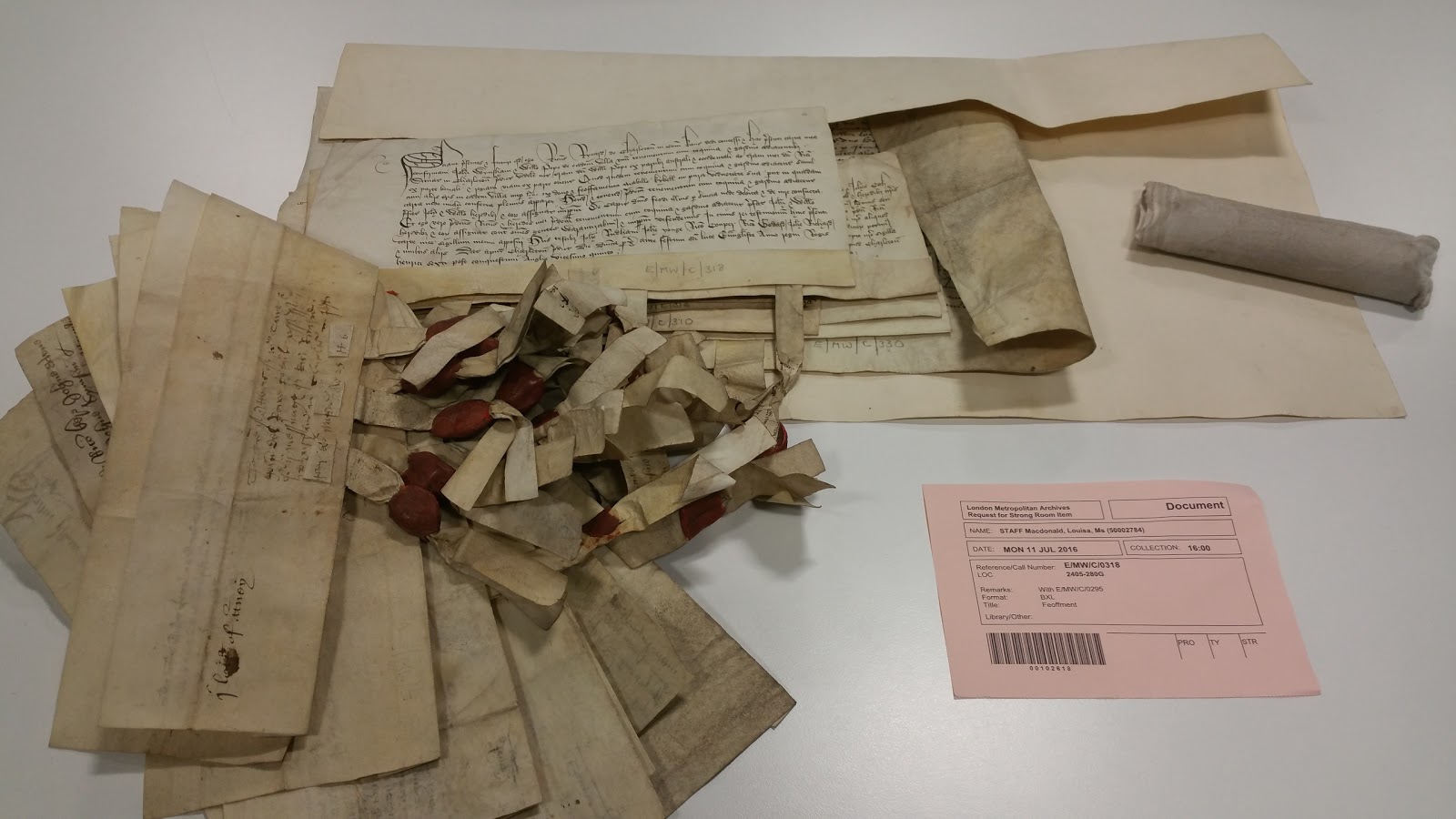 The first time I’ve ever seen an 18th century feoffment document!
E/MW/C/0218 / A transaction in 1707 for Tower Place and the Warren in Woolwich
The London Metropolitan Archive is hidden away in a large nondescript building down in Clerkenwell. As an archive of local records for the London area, it combines the collections of the London County Council (LCC), Middlesex County Council (MCC), Greater London Council (GLC), pan-London charities, organisations, businesses, and records from the Diocese of London (all of the parishes that donated their records – most have, and these are quite useful for those researching family history within the area). 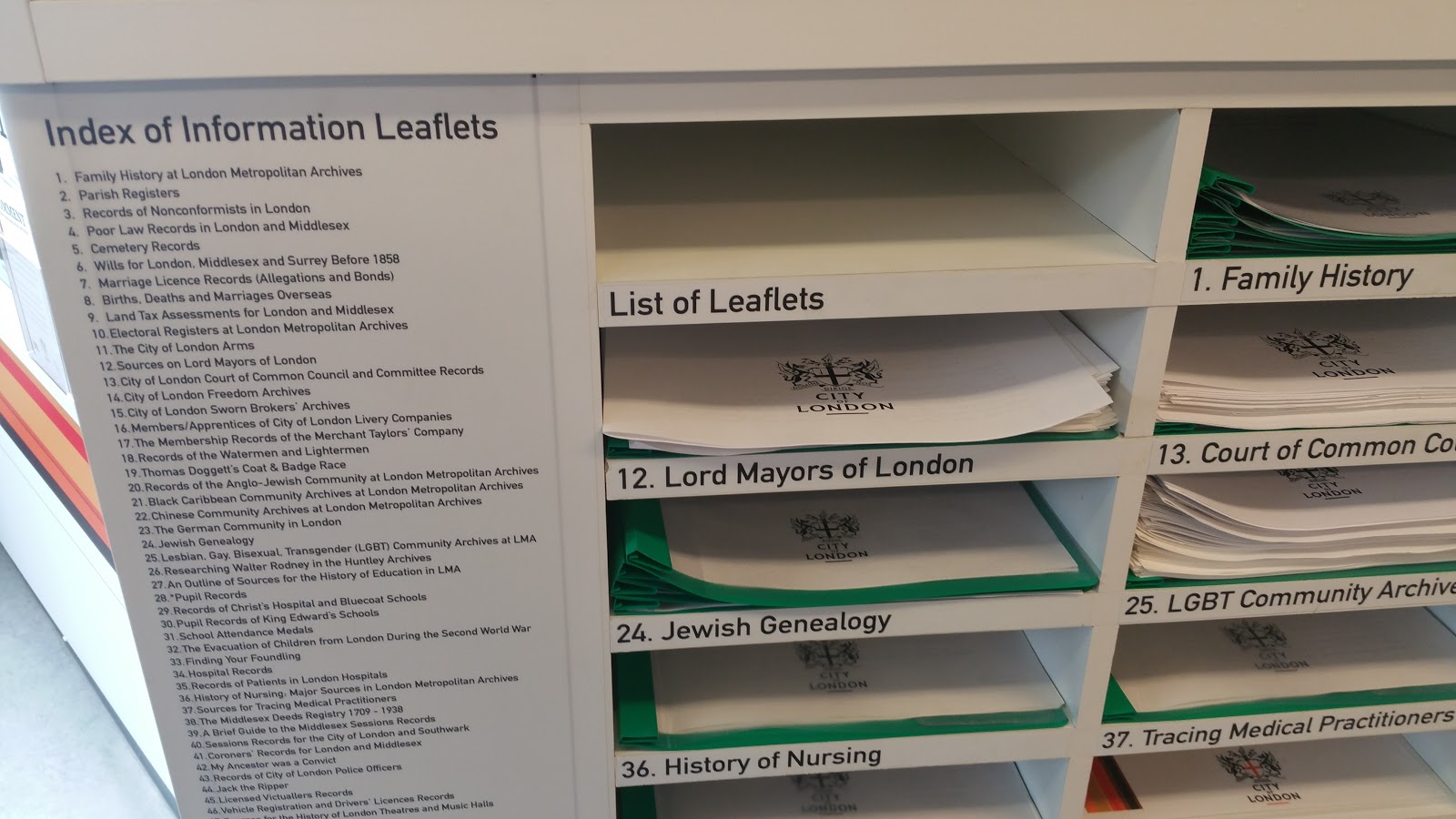 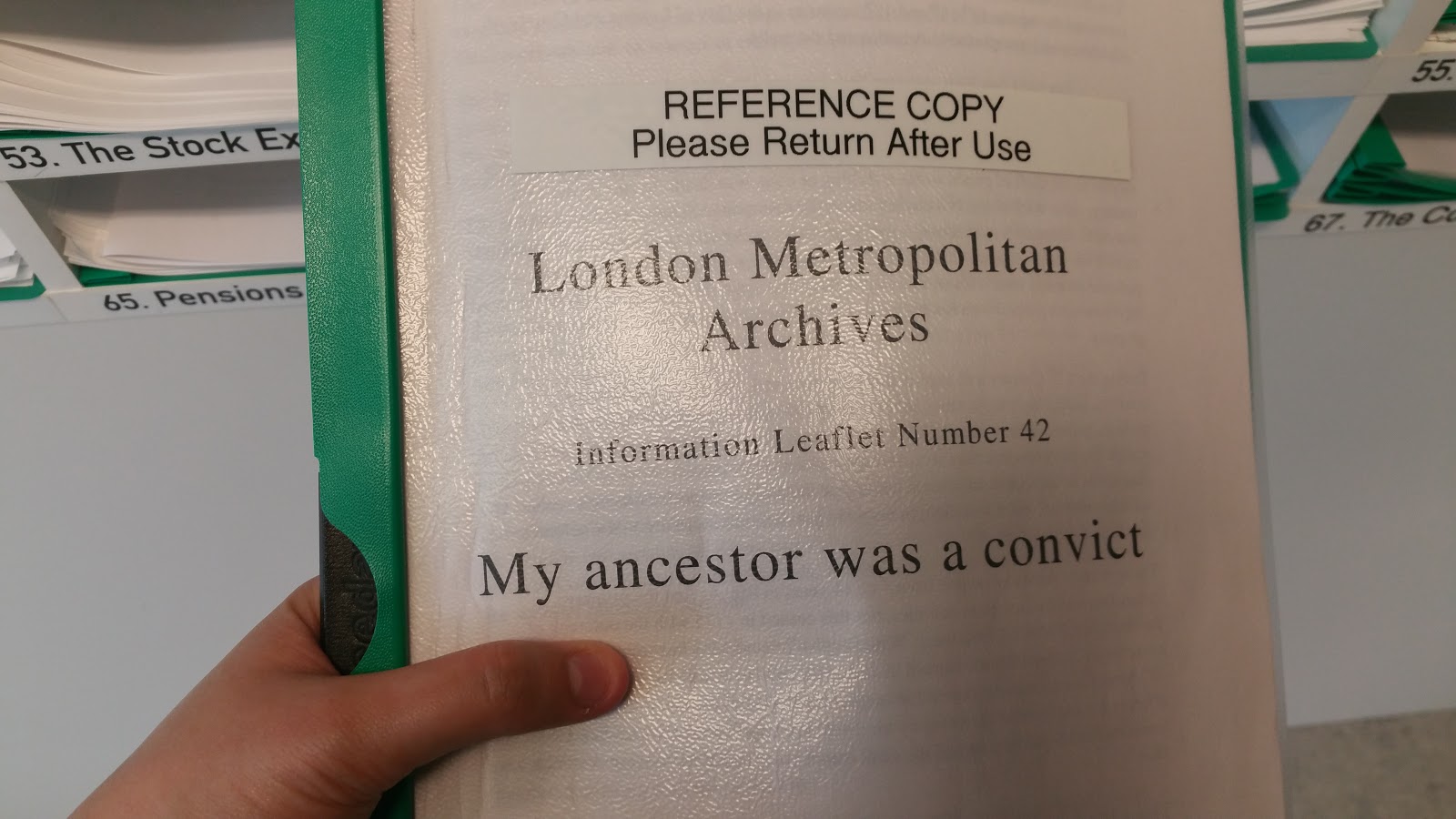 “IS YOUR ANCESTOR A CONVICT?” 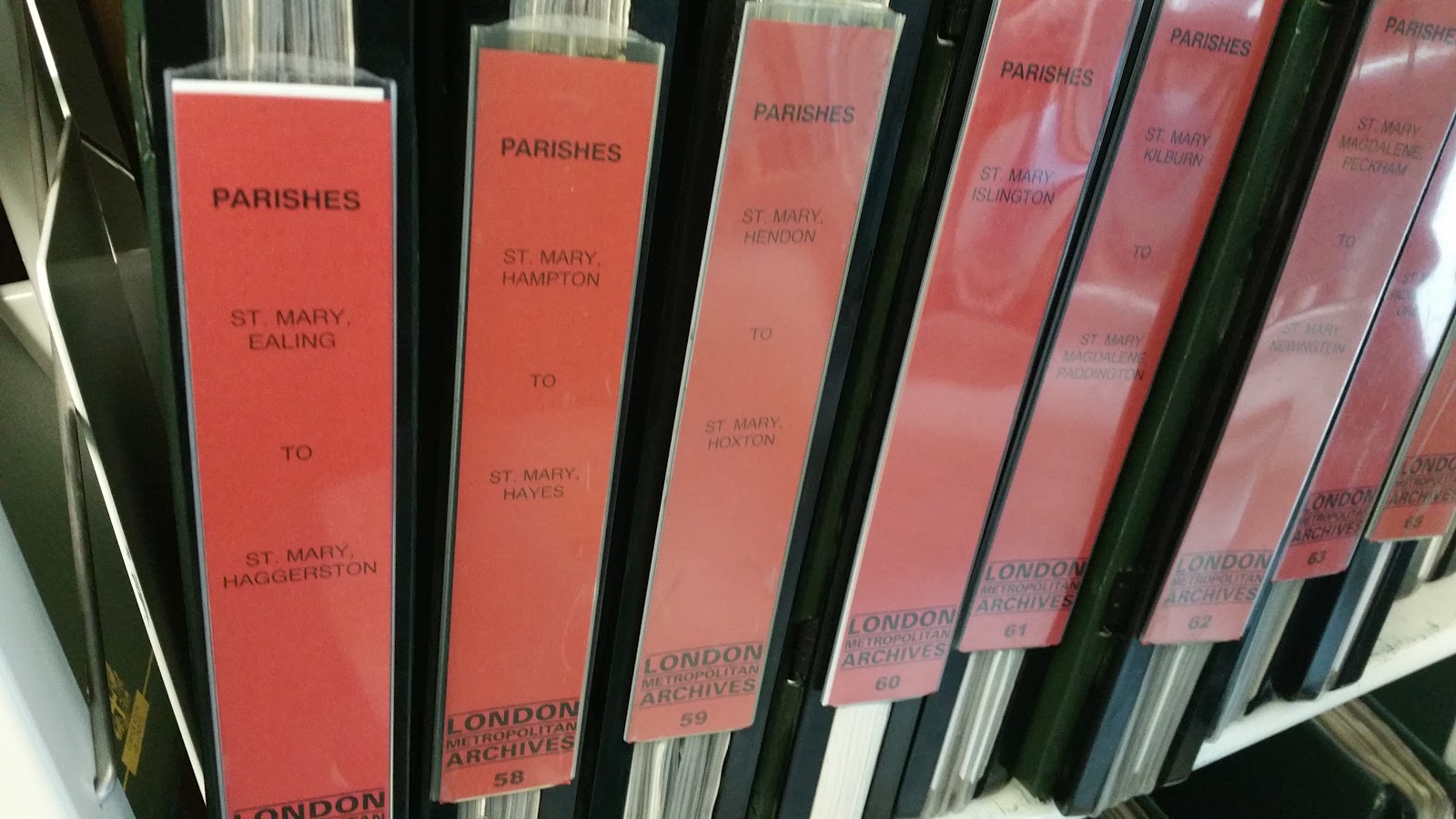 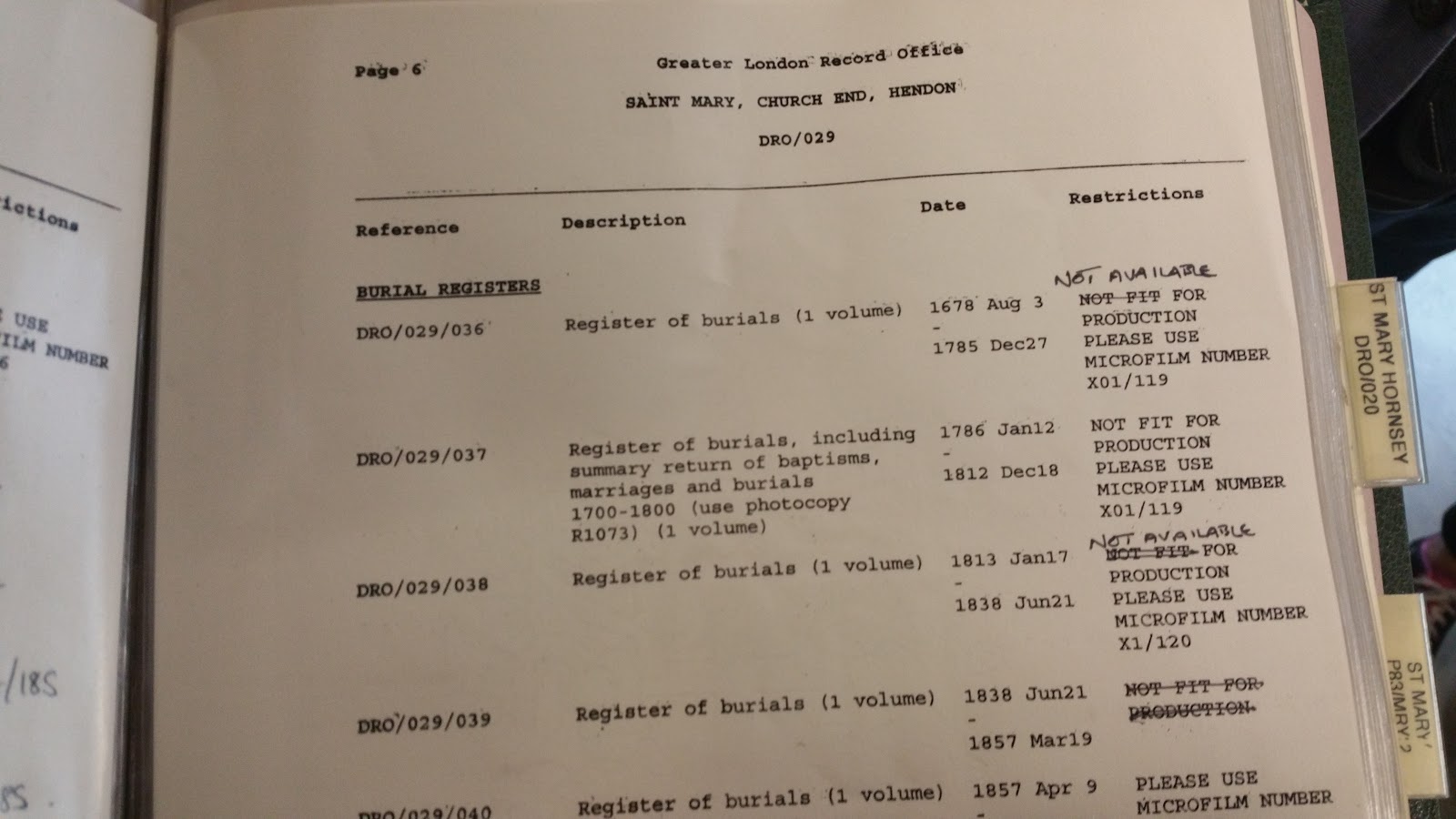 Parish Registers: useful for historical records of births, names of parents, baptisms, marriages, and burials, etc.
Mind you, I’ve noticed that archivists and government administrators seem to love acronyms, so the terms do take getting used to, but the most exciting thing I’ve been induced to think about is the concept of the place called MIDDLESEX. Perhaps this is something all you people brought up in the UK already know in great detail or learnt in school, but my understanding of Middlesex has always been fuzzy. To be honest I simply thought that was where Enfield is (aka Quite Far Away Place), because I saw a Public Office noticeboard in Enfield in 2014 that wrote MIDDLESEX on it. Back when we were living in Stamford Hill, I could hop on the National Rail service directly to Enfield Town in about 20 minutes, so it’s clearly a very reasonable commutable distance to the city. 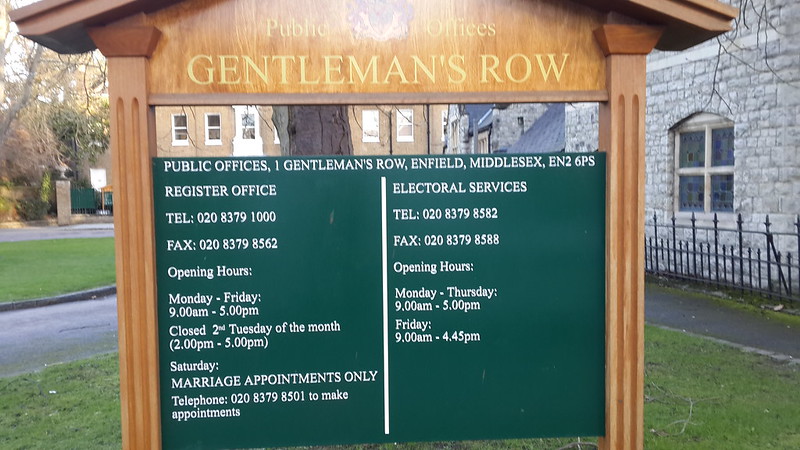 In Enfield (February 7, 2014)
It might sound like a useless distinction to talk of, but people, you don’t understand: I’m still easily excited by the frisson of crossing invisible county lines! We haven’t got other historical counties or towns to travel to in Singapore, everything is just paddling about in the same pond there. Here I can go to a DIFFERENT county or city in under half an hour? OMG I’ll do it, it’s cheap thrills for me!

But non-londoners may not be aware of the boundaries of the historic county of Middlesex prior to the 18th and 19th urbanisation which rendered areas such as Tottenham and Enfield more as residential suburbs for the city of London.

Map by the Institute of Heraldic and Genealogical Studies, 1997
In simple terms, historically Middlesex had its own thing going on (and it even appears in the Domesday Book) – Middlesex, Middleseaxon, Land of the Middle Saxons! But then as the city of London expanded, more and more of what would be considered Middlesex in the past was effectively changing into the “suburbs of London”…

Starting with the Local Government Act of 1888, administrative counties were formally established. So in 1888, a small part of what was considered part of Middlesex County was then transferred to the new County of London, and the rest then came under Middlesex County Council. Over the years, a series of local government acts established, merged, or dissolved various counties. The MCC (Middlesex county council) was dissolved in 1965 as the area had become urbanised together as the Greater London area, and then became under the GLC (Greater London council) from 1965 onwards [London Government Act 1963] – until the GLC itself was dissolved in 1986 and its powers distributed to the various London Boroughs [Local Government Act 1985].

So the question is, does Middlesex still exist or does it cease to exist if the administrative region of Middlesex no longer exists? (I suppose I’d say that Middlesex ceases to exist once people no longer actively refer to it as Middlesex).

This reminds me of the equally confusing question of “Is it Harringay or Haringey?” A victim of multiple spelling variations, when you walk around the neighbourhood around my house, you’ll see this: 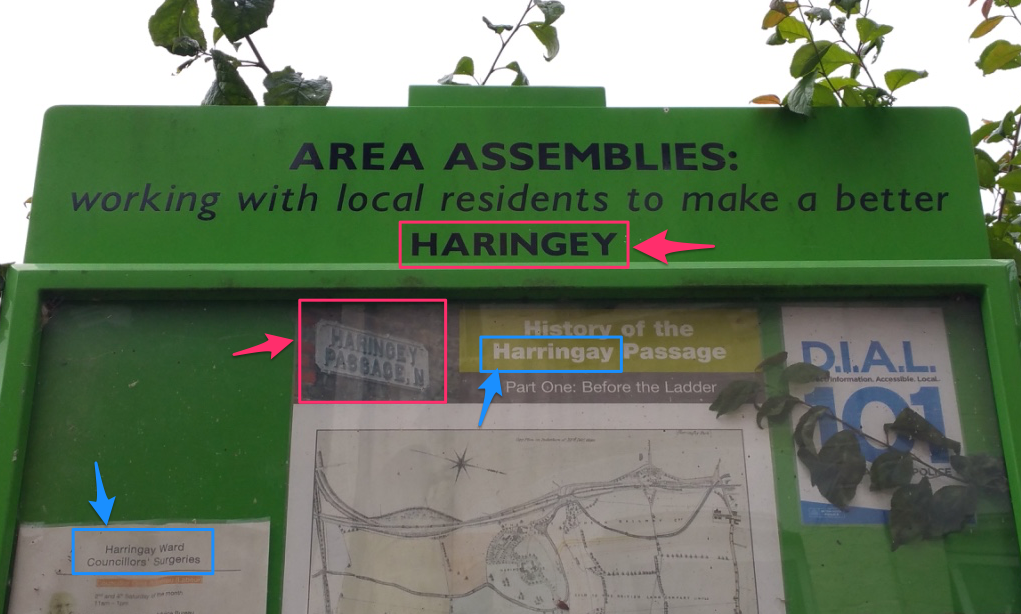 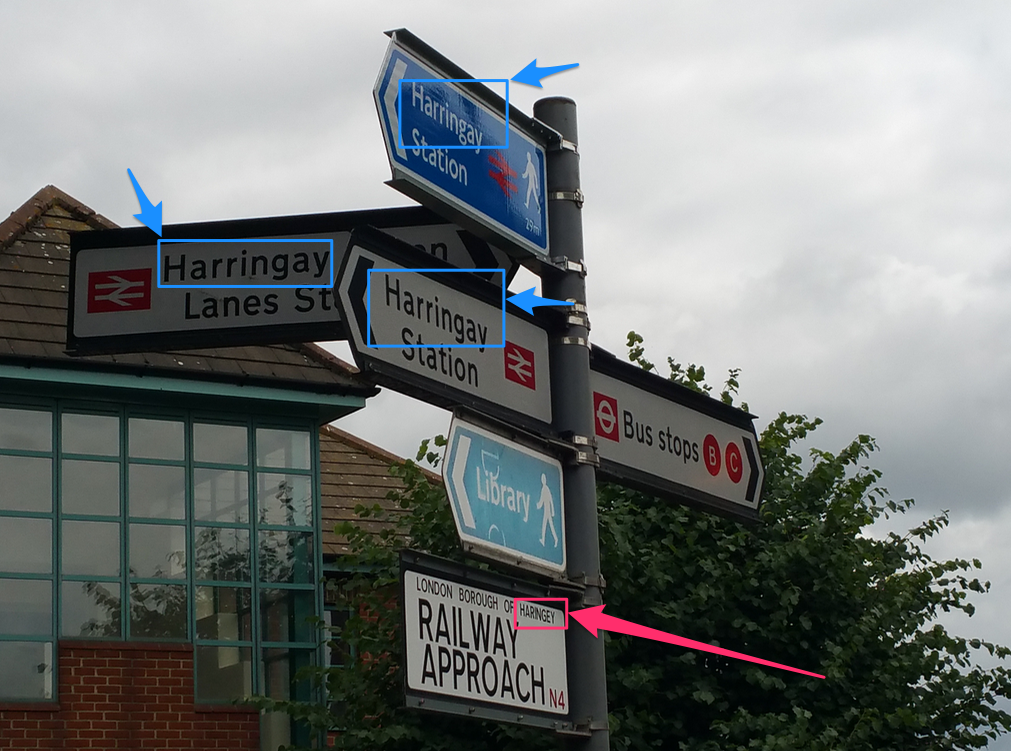 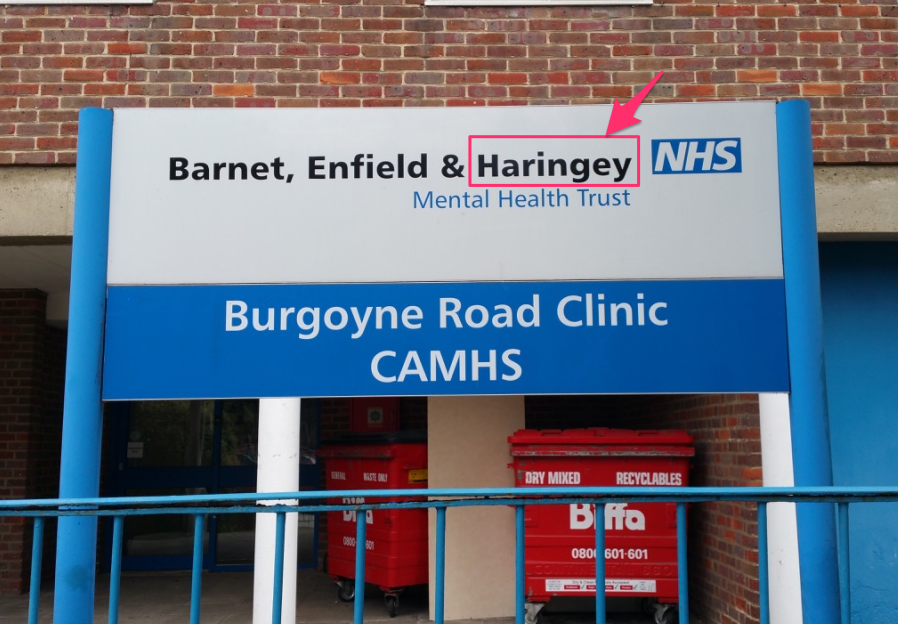 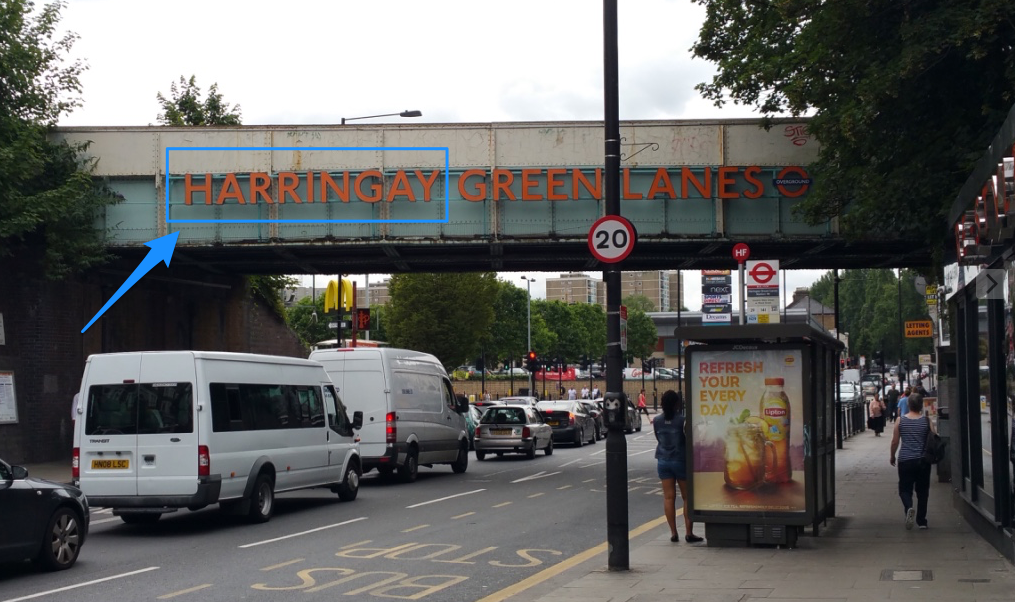 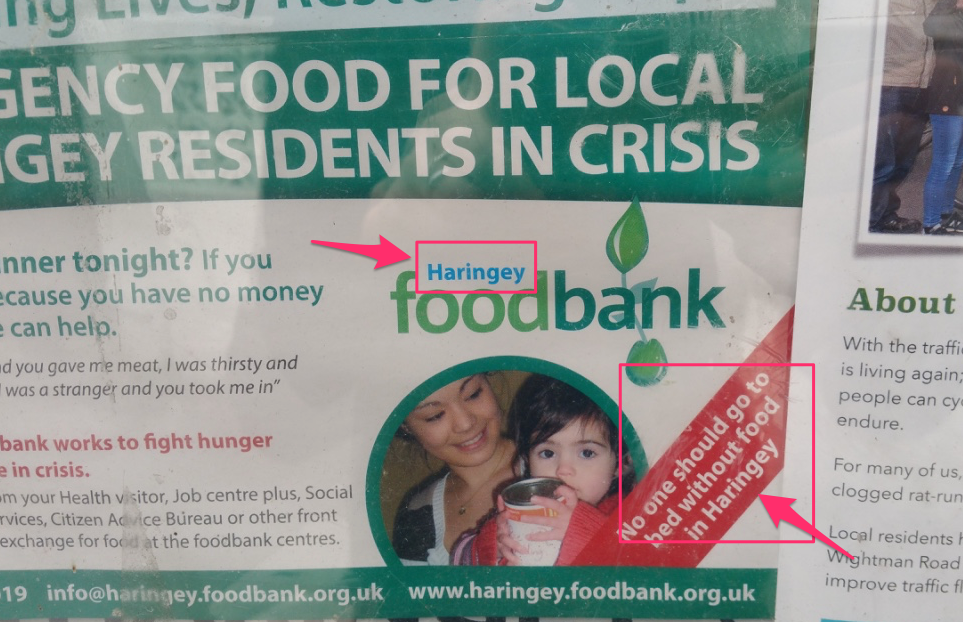 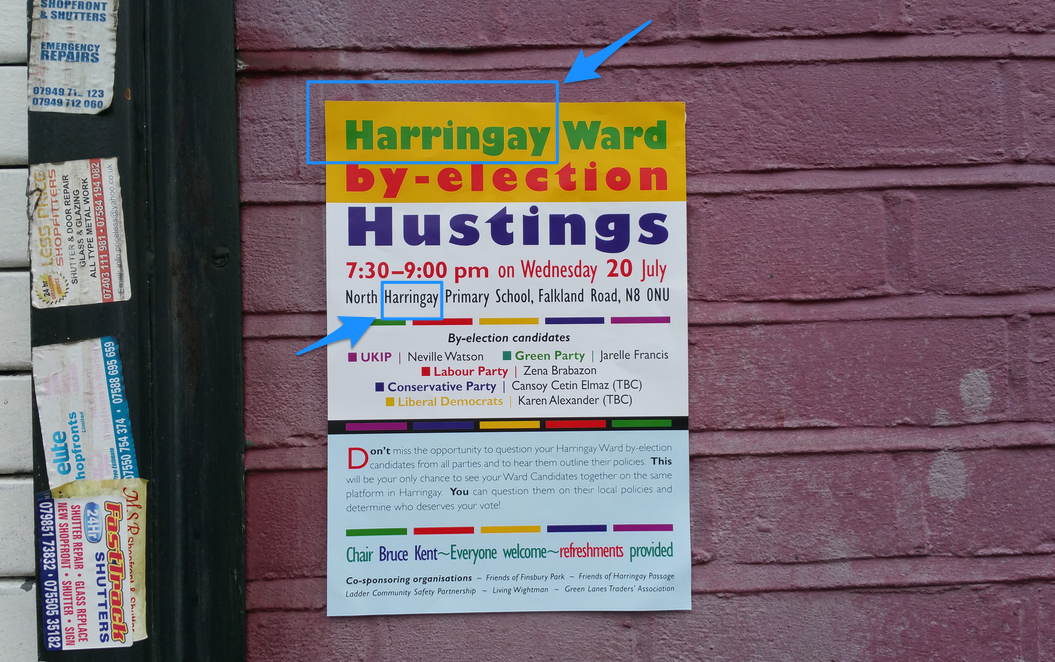 A walk around on 17 July 2016
A h2g2 article notes that the spelling Haringey was recorded in 1387, whereas Harringay was recorded in 1569. A large Tudor house built in 1792 was named by its owner Edward Gray as “Harringay House” and it formerly stood at the top of the hill (on what is the present-day Ladder, at the top end closest to present-day Wightman Road between Allison Road and Hewitt Road and over the tunnel through which the New River runs underground) – thus the usage of Harringay took common precedence in the neighbourhood. OS Maps in 1894 record the area where our flat is as Harringay Park Estate (Note: this means that our house was originally built somewhere between 1880-1894).

The name “Harringay” was preferred by the people who lived there and attempts by the Municipal Borough of Hornsey to standardize the spelling as “Haringey” were stymied by locals who insisted on using “Harringay”. Today, the administrative name for the borough is Haringey, but the place is known as Harringay. In any case the names Harringay/Haringey and also Hornsey are both actually derived from the mangling of the name of Harenhg or Heringes or Haering’s Hege. Haringey Borough website says that a local historian established that there are a staggering “162 variants of the spelling of the name in surviving historical documents from the medieval period onwards”, so at that rate, people may as well have been muttering HRHRHRHGHRGGG to each other… “Oh righto, see you tonight in Herrggnhgghhhhh….”

IN THE NEXT EPISODES: WE VISIT THE NATIONAL ARCHIVES, WHERE IF YOU SIT FACING THE WATER FEATURE TO WATCH THE FAMILY OF GEESE WHILST EATING YOUR SANDWICH AT LUNCHTIME, ALL OF THE GEESE WILL ROTATE THEIR BODIES TO FACE YOU, SUCH THAT YOU WILL REALISE, CHILLINGLY, THAT NO LONGER ARE YOU THE ONE WHO IS WATCHING THE GEESE – BUT RATHER, THAT THE GEESE ARE WATCHING YOU.

Kassel and Documenta(13) – Workhouses, Archives, and other Repostitories 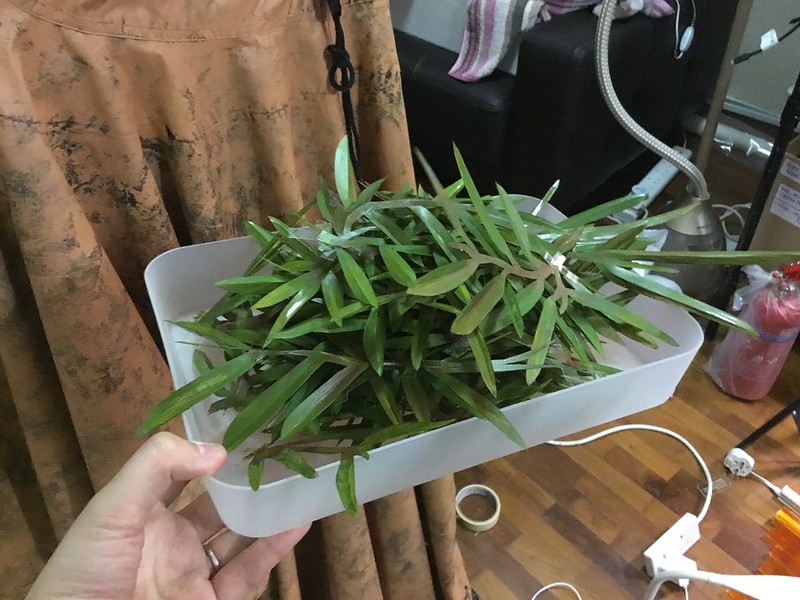 A few years ago I wrote a series of short stories, one of which was about a social…
Debbie Ding
Uncategorized