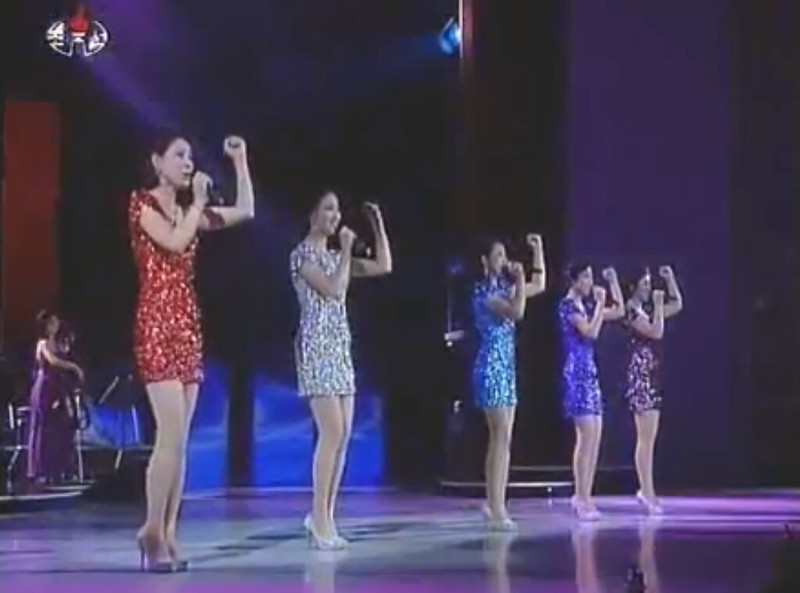 Those Korean lessons I took are proving to be of some use, even if the only thing I can do is read the alphabet. Recently, it came to my attention that Pochonbo Electronic Ensemble has actually been replaced by an all-female band known as Moranbong Band. They are truly uncanny – for one thing they are indeed a modernization on the old fashioned Pochonbo, whose musical styles attracted me because it sounded a lot like the off-beat cha cha of my parents’ generation – mirrored in Chinese and Japanese oldies that I am already used to hearing in Singaporean coffeeshops and karaoke bars. Yet when I look at the new Moranbong Band, there is something not right. How can their appearance be both modern, yet somehow…. outdated? How is it possible?

Sparkly sequins, mini skirts, high heels, modern hairstyles.
The all-new all-girl North Korean Moranbong Band.
They could almost have come out of something from Eurovision.
Still, better than looking like something from the 1960s?
This morning I watched an entire one hour concert of Moranbong Band – their 2013 New Year Day’s performance. I’ve been slowly copying out song titles as they flash across the screen on various songs and then typing them out slowly in Hangeul in Youtube. Naturally, it will come as no surprise that most of these aren’t “new songs” – they are really just “modernized” interpretations of what seem to be old favorites in the DPRK. The most astounding, most mind-blowing track of the entire concern is 단숨에 (DanSuMe, also frequently translated as “Without a break”). THIS CANNOT BE MISSED. 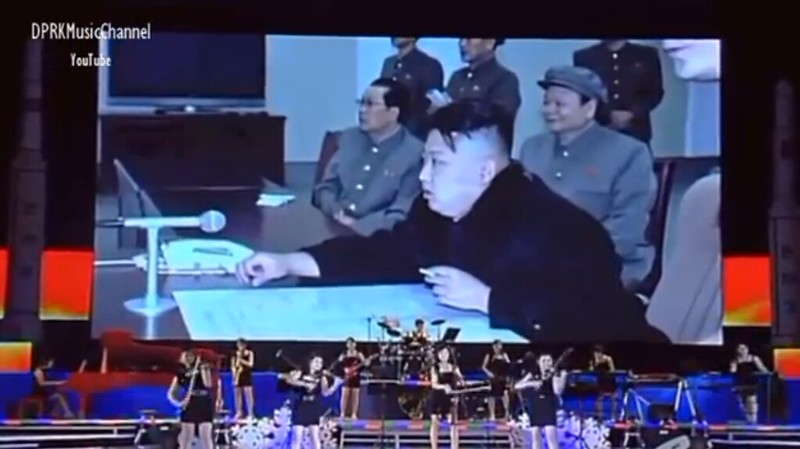 This is literally Bond-meets-DreamTheater-meets-DETHKLOK! Almost too over-the-top and bombastic and epic to be real (why is this not even viral yet?), played to a seemingly enraptured crowd of hundreds of North Koreans, initially shown seated in countless rows in a huge indoor theatre, clapping their hands to it the song and images of Kim Jong Un in various everyday scenes. 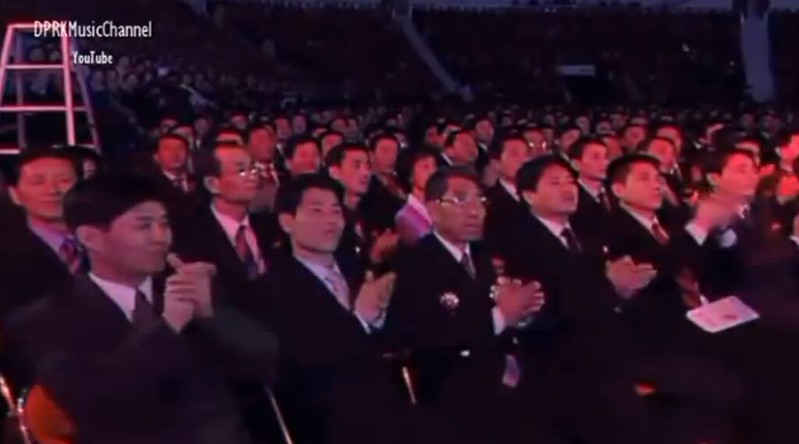 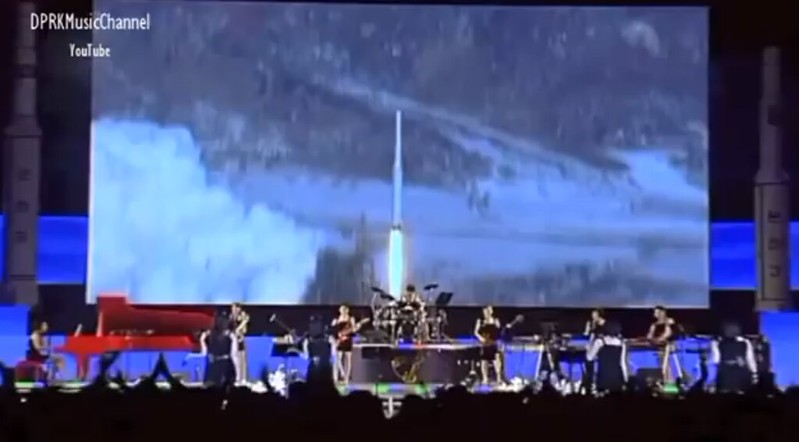 The finale of the song is accompanied by a video of a rocket being launched, and they’ve carefully mixed in the sound of the audience cheering wildly. The video and the band has been strategically located so that the rocket seems to come RIGHT OUT OF THE CENTRE OF THE BAND WHERE THE DRUMMER AND DRUM KIT! And you don’t notice it at first, but the sides of the stage have even been FLANKED WITH TWO MODELS OF ROCKET MISSILES, which they later reveal with the dramatic stage lighting. (The video even cuts to a shot of a few old men beginning to dance wildly all over the place, along with women dancing in their traditional hanboks. Oh, these crazy north koreans!)

The song climaxes with FIREWORKS! and the ROAR of a rocket mixed in, along with a video of the flight path of the rocket, and then – this part has to be seen to be believed – and then we see that the North Korean missile finally BLOWS UP THE ENTIRE PLANET!

Yes folks. This performance climaxes with a video of NORTH KOREA BLOWING UP THE ENTIRE PLANET!

You might be thinking, BUT WHY WOULD ANYONE WANT TO DO THAT? Why would anyone glorify the act of blowing up the entire planet???

NOW THIS IS WHAT I CALL ENTERTAINMENT PROPAGANDA!

Obviously the North Koreans have a funny idea about power. I agree that having the power to destroy the entire world represents the ultimate power. It represents their desire to have the ultimate control over Earth’s entire existence. Who on earth is editing this? Who scripted it? Who directed this extremely epic performative extravaganza? What structures exist in North Korean to facilitate the production of this sort of work? There are so many unanswered questions! Can we ever know for sure what North Korea is truly all about, without intervention and interpellation from South Korea and the rest of the world media?

UNDOUBTEDLY A NUMBER ONE HIT!
Moranbong Band – Without a break
모란봉악단 – 단숨에

More of Moranbong Band and Other versions of “Without a break”:

A Jaunty pop version of 단숨에 with military footage

A military choir version of 단숨에

More from the Pochonbo Electronic Ensemble:

Both Pochonbo Electronic Ensemble and Moranbong Band have done notable covers of “Let’s Study!”, a song which must be targeted at children as well, judging from the bright multicoloured words in the video. The Pochonbo video consists of many shots of children in school studying, using computers and headphones, and visiting what appears to be a museum. But what are all these children studying? What is their curriculum like? What is inside their museums?