The point of a 3D printer or 3D replicating device is that it should be able to print new parts for itself; and this week in our house we were getting one step closer to the Singularity! There was a weird blob of filament on the UM2’s nozzle which seemed to overhang dangerously so I thought I would slowly raise the temperature to 260 deg to get rid of it. After the nozzle had heated sufficiently to make the blob disappear, I turned the heat down to go to 220, but the fans were too effective and actually lowered the temperature to 205, and the sudden change in temperature caused some underextrusion, like scars on tree rings on these tiny teacup tests. Therefore if you need to change the temperature, it seems you should change it very slowly and no more than 5 deg at a time. Removing the blue bowden clip takes some effort… and then some. Earlier yesterday, while the machine was turned off, I was trying to remove the bowden clip and it jettisoned itself out violently… RIGHT INSIDE THE HOT END. After having a small nervous breakdown, I was eventually forced to face reality and to improvise some new tools to retrieve the blue bowden clip from inside the hot end. These finally worked for us – a bamboo stick with blu-tack on one end, and a small paperclip fashioned into a hook. Use the stick with a sticky end to lift the blue clip and then fish it out with the hook.

This unfortunate error happened twice in the day. We tried to print all 5 parts of a replacement material feeder in one print with an initial layer of 0.3mm. The result was that every first layer was borked, although we didn’t understand what was the reason for it not sticking properly to the build plate. Obviously, if the first layer does not turn out right then the outlook for the piece seems pretty dismal. We tried this about 6 times and each print’s first layer either did not come out straight or detached from the print bed, so we aborted each attempt in succession. I tried putting some glue on the test bed (with a damp paper towel to spread it out), but I believe the glue doesn’t do very much and can be dispensed with, especially with a clean heated bed. After which we decided to print one part at a time with an initial layer of 0.2mm (and a lower print speed of 35mm/s) and it printed perfectly. Some appearance of “pillowing” occurs during printing process. Just saying, in case if you are paralysed by inertia and standing there watching the print like a paranoid babysitter – yes, the outcome will be alright as long the top layer is thick enough. After successfully printing two parts individually on its own, we decided to print 3 of the parts together with an initial layer of 0.2mm. This printed beautifully. Therefore one possible conclusion is that our initial problem with the smaller details of the print not properly sticking to the build plate might have been caused by setting the initial layer at 0.3mm? Update: EVERYTHING WORKS BEAUTIFULLY NOW. I recommend that if you have grinding problems with the UM2 that you print this feeder with similar print settings. Your sanity will thank you.

I’ve been bogged down by too much work lately (a constant and paralysing problem), and regrettably am behind in a lot of documentation and writing. But during the course of my projects involving any 3D printing, each weekend I’ll do a sum-up of all my prints and experiences with the UM2. 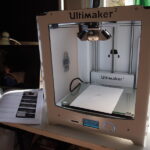