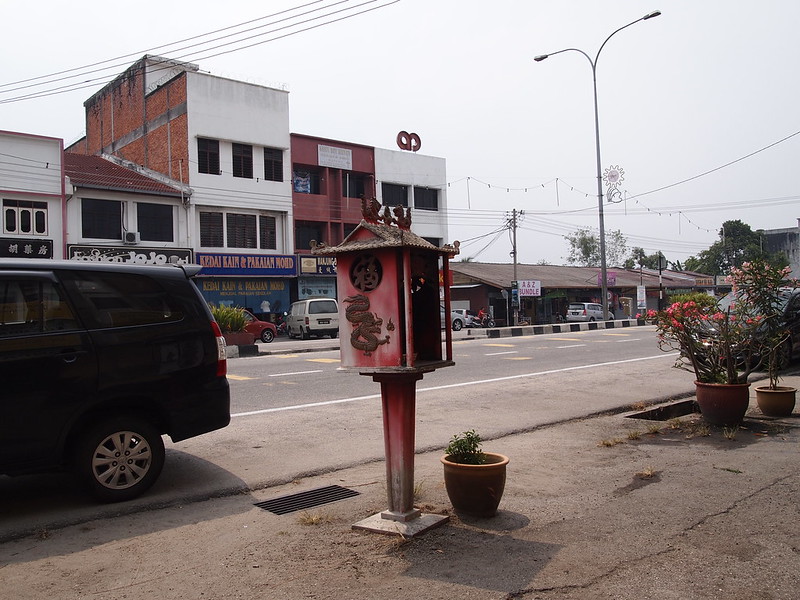 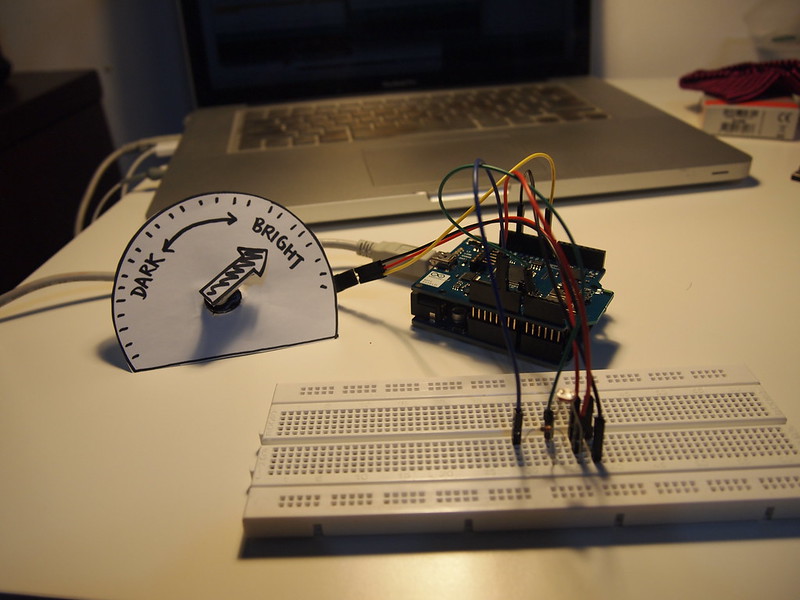 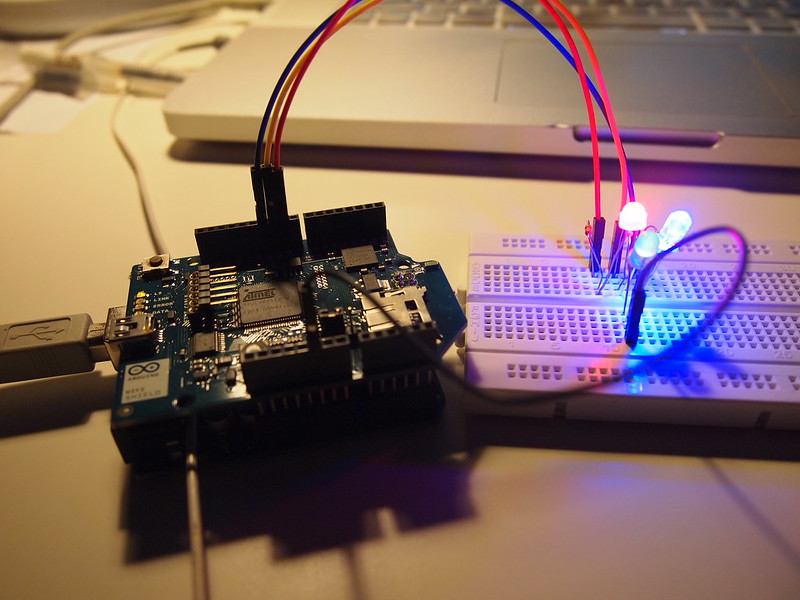 I have to admit that the world of Chinese is mostly a mystery to me. Tradition, culture, or language? – around here, we use google to find out about those things. One thing that really surprised me about my recent trip to Malaysia to visit my grandma for the first time, was that my grandma helps facilitate people’s prayers to a certain Ma Xian Niang, which had been explained to me to be the sister of Mazu. It was the first time I heard of the name. Personally, I am not religious myself and honestly know nothing of the cultural or religious practices of Chinese people in general. Sorry, yeah I know I’m a big fat potato.

Most people in Singapore will be familiar with Mazu, the goddess of the sea, but her sister? There is no english language information on the name, and it seems I will need to look to more Chinese sources for the answer. The only page that I’ve found on the matter also involves a person accounting his search for the origins of Ma Xian Niang, and finding that even seemingly wise priests who gave muddled or contradictory accounts of the origins of Ma Xian Niang. The post on the internet suggests she was not the sister of Mazu but simply another girl with the family name Ma, with a prescience for knowing when it was safe to sail. But how reliable could this information be? And is this simply something that is not documented in the English-speaking world?

The point of all this was that I had never expected a strongly religious element to emerge, based on what little I knew of the area’s history. So, my “ancestors” had been brought over from Foochow (China) to Sitiawan (Malaysia) by Methodist missionaries. But where had this worship of Ma Xian Niang come from? When did it emerge? Who brought it over? Who was building and maintaining all these beautifully painted accoutrements of…. the temple? Was there some complex and thriving world of temple industry that we knew nothing of?

Another thing that I noticed was that nearly all the houses in the area of Sitiawan had these little prayer houses. My father mentioned having seen them when he was a child, but did not know what they were for, or how they were to be used. I had not expected this – from the descriptions that I had received of the town having been a settlement of Chinese who had been brought over by missionaries, that initially suggested to me that many might have been Christians or would have had been related to the Methodist Church in Gutian, Foochow. The children of the new settlement would have had the opportunity to have an English education (my father attended a methodist english school), meaning they were potentially anglicized and exposed to Christianity. Yet here were entire neighborhoods with chinese prayer altars in EVERY SINGLE HOUSE. These little red houses were also dotting the roads as we drove along! THEY WERE EVERYWHERE! 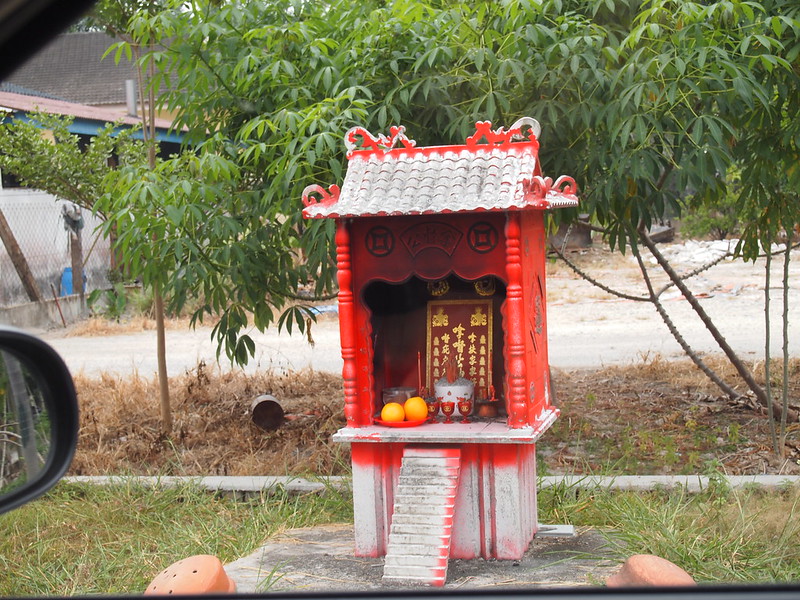 They look exactly like a tiny traditional Chinese house. This is one very lovely example, perched on a raised foundation, replete with a TINY STAIR leading up! WHY A TINY STAIR? Is it for some sort of tiny earth god to access this tiny temple? I love the tiny stair detail, because it makes it even more house-like! Who is the architect of these tiny prayer houses? What a clever addition of the tiny stair. Hey, you can’t be expecting the god to be climb up on his own, all arms and legs, that seems a little undignified. Although, hang on, how big is the earth god? And although the one above doesn’t have it, a lot of these tiny houses have got ornate roof details like carvings of dragons, making it almost like a miniature model of a temple or a traditional chinese house. Inside there is usually a pot of incense and a tablet and other offerings. I feel like the construction and design of these “prayer houses” constitutes an artisanal craft in itself! 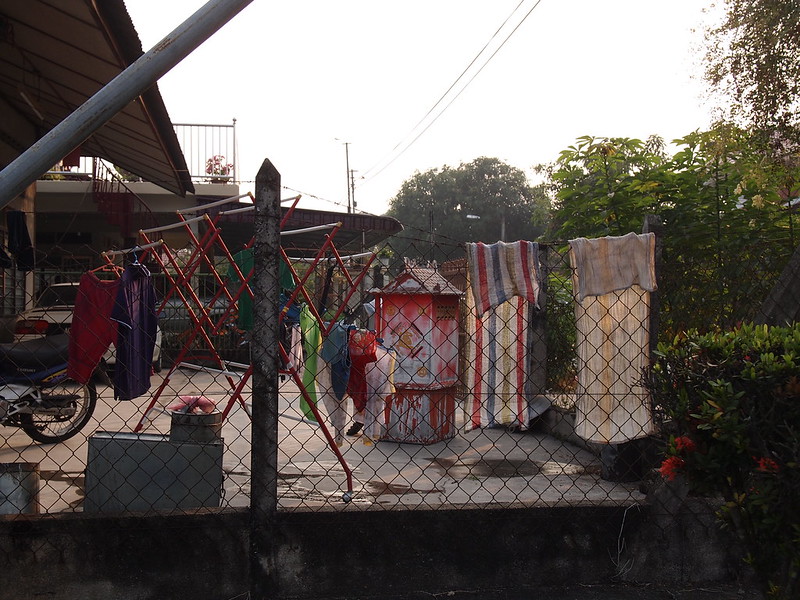 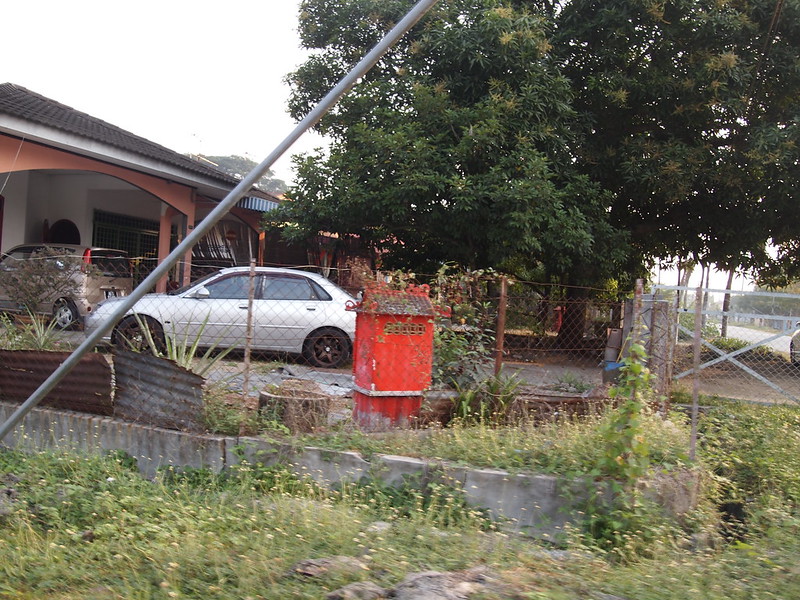 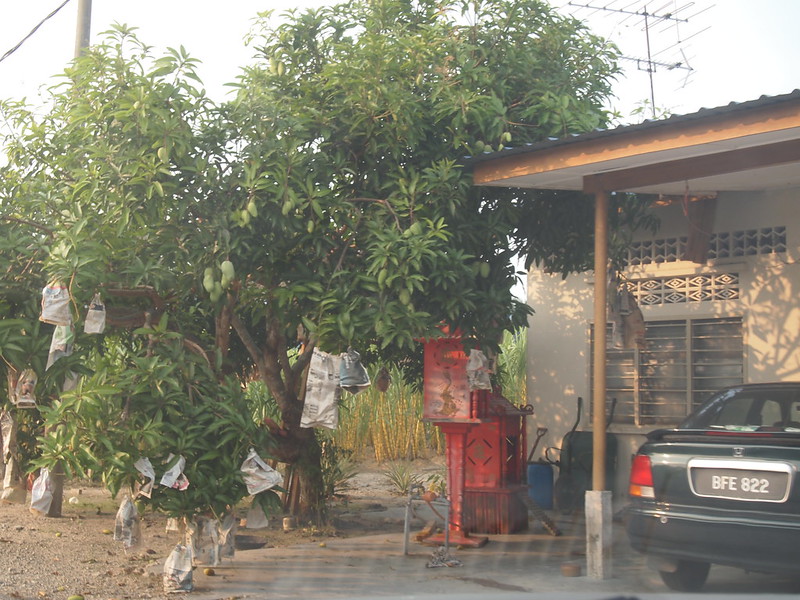 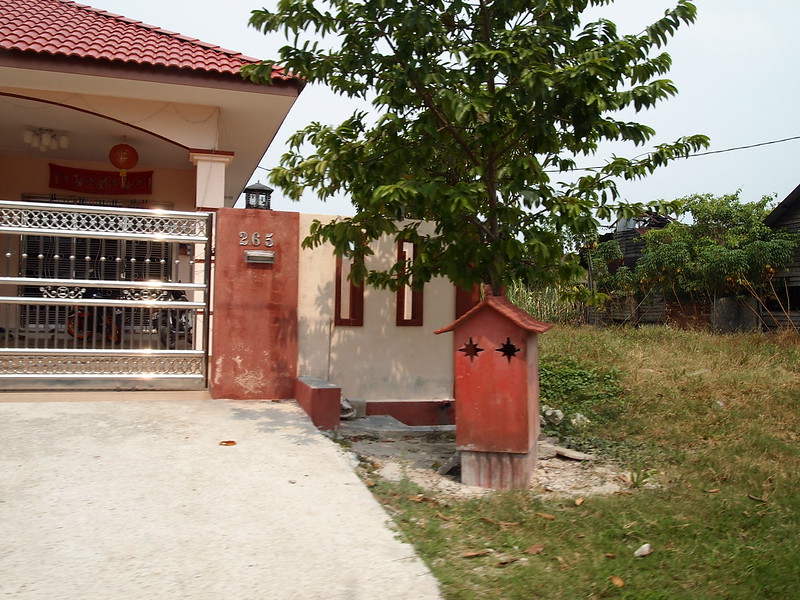 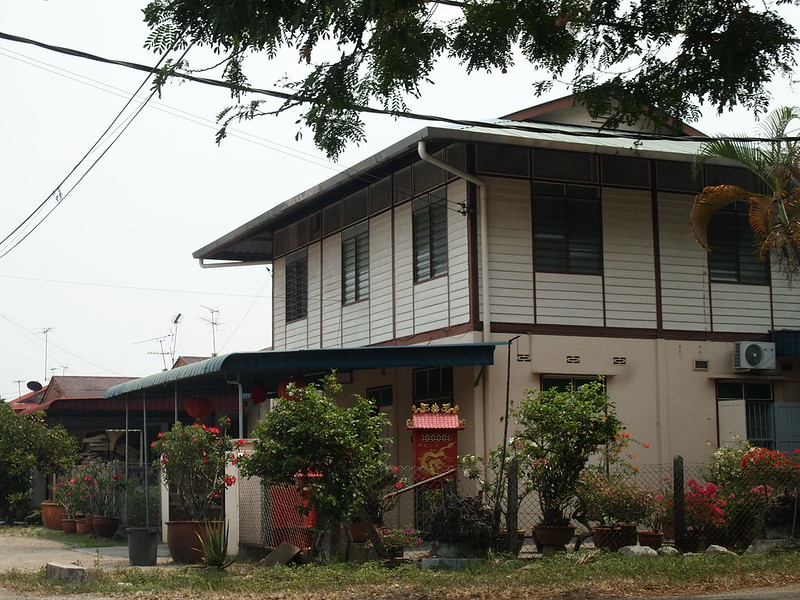 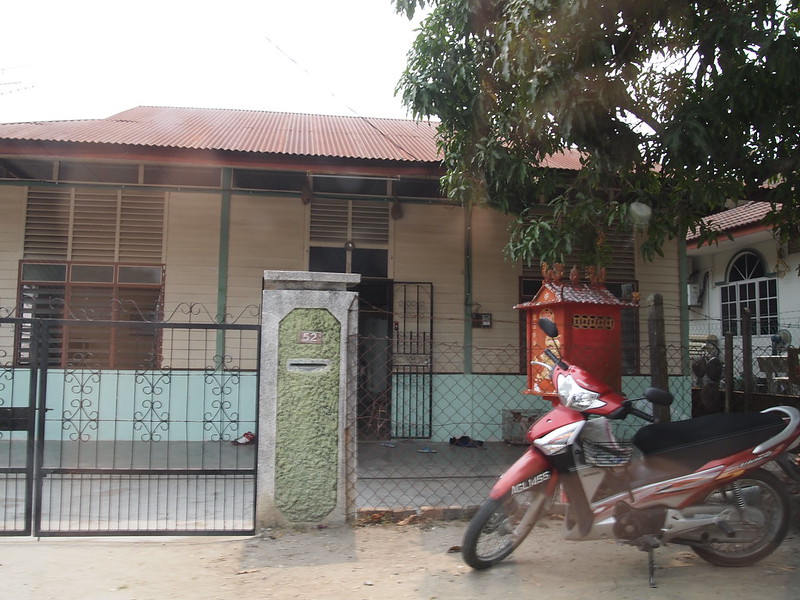 Lots and lots of them in Ayer Tawar…
Finally, I found a shop that sold these tiny prayer houses! Forgive me for not knowing what they are actually called, for the purpose of this post I have just called them tiny prayer houses because they look just like little houses to me and I think they’re used for prayers. Anyway, I was very excited to see this shop/factory, with lots of bright little prayer houses scattered on the roadside, on a main street completely lined with chinese temples, mosques, churches, and hindu temples – the big prayer houses! 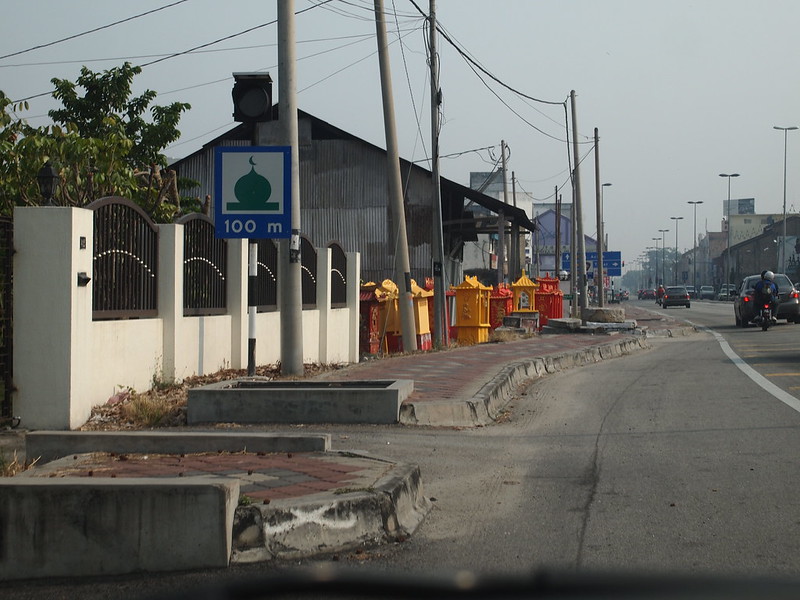 The shop from afar! 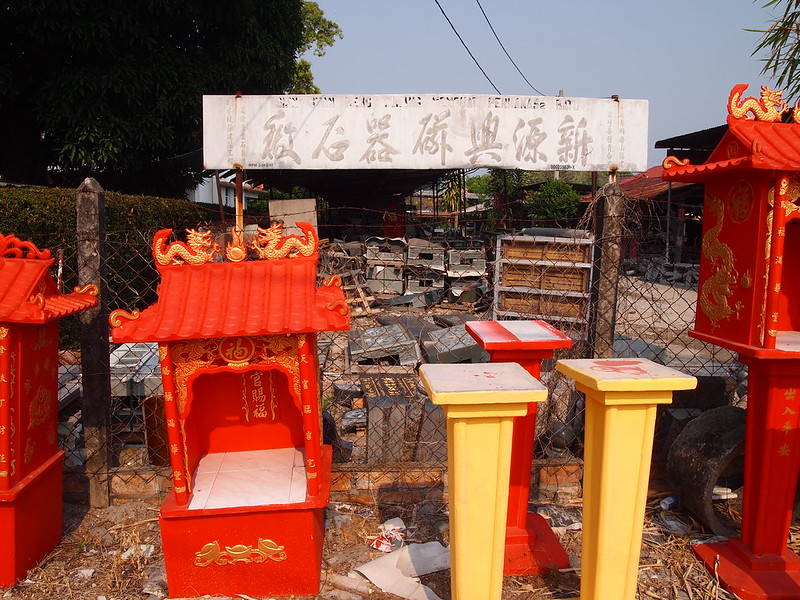 The front of the tiny house factory
Its crazy! From the approach you can even see a sign indicating that there is a mosque very close to it. I mean, my reading of this whole “tiny prayer house” tradition is that people here are not only praying at public places of worship (the big prayer houses), but even going one step further by “building” their own personal places of worship at home!

We stopped there so I could ask the proprietor a few silly questions. A lady inside came out and was very patient to answer my queries. She told me that the red houses situated closer to the ground were for 天宫 (Heaven god) and the raised houses on the pedestals were for 嗱督公. Googling for the latter reveals that it refers to Na Tuk Kong, a guardian spirit specific to Malaysia. 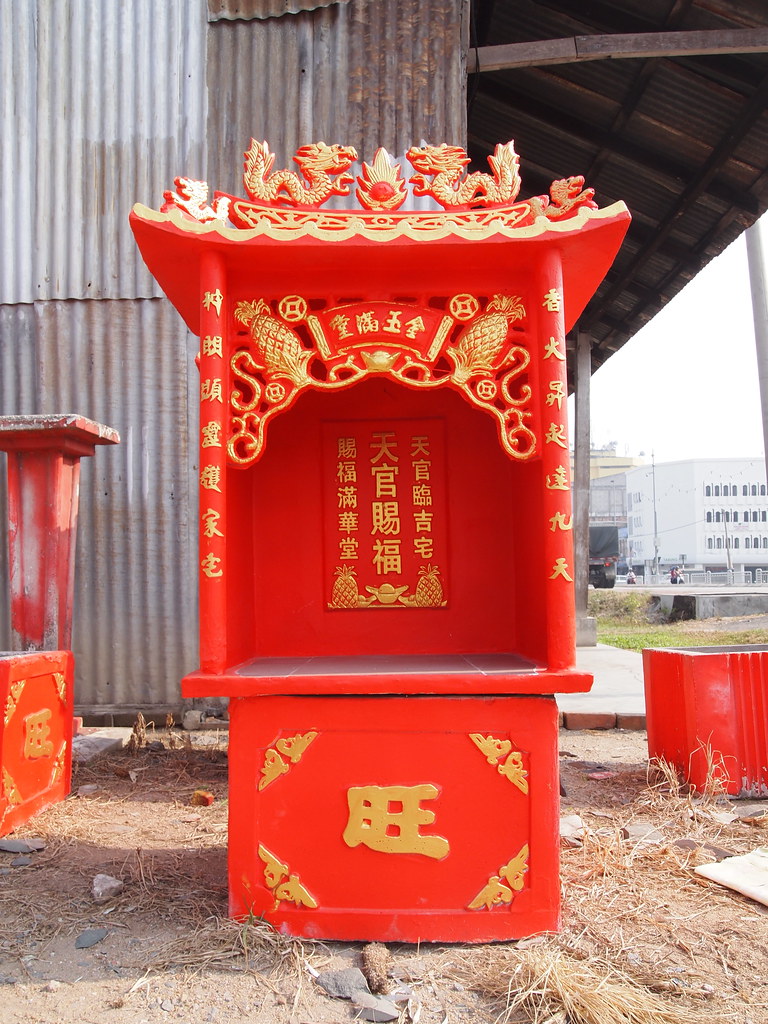 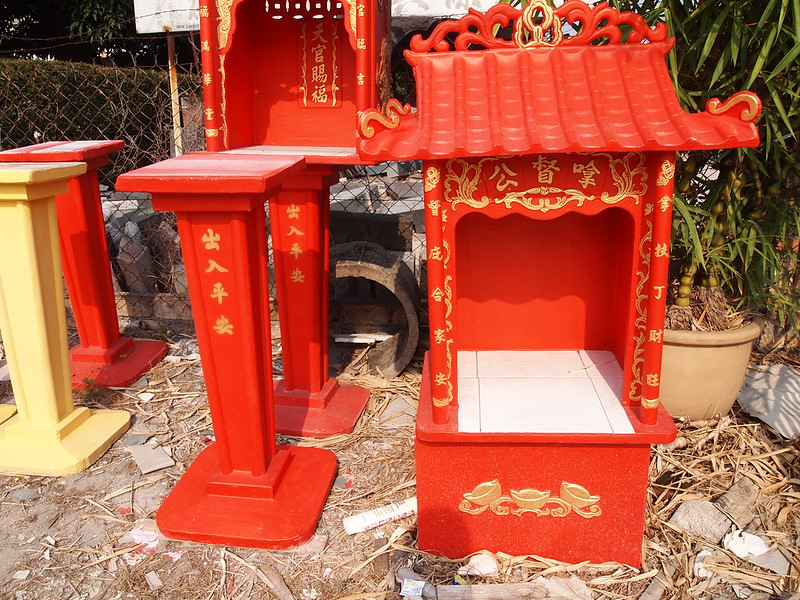 It is not clear why the Chinese, having their own Earth deity can easily accept the Dato into their religious pantheon. May be they need a local deity to gain more spiritual protection (…) To most Malaysian Chinese, the Na Tuk Kong (Hokkien: Da Tok Kong) is a local guardian spirit that resides in trees, ant hills, caves, riversides and in strange stone formations…

This information seems to be have been derived from a Chinese source, so you can feel the awkward translation in it. I wish I could read Chinese more fluently. I should attempt to translate the entire article when I have more time. And boy oh boy, I am so very tickled by the idea of the local “Dato” guardian being thought to reside in this list of natural elements including “strange stone formations”! And this still does not explain who was the one who first started building tiny prayer houses??? 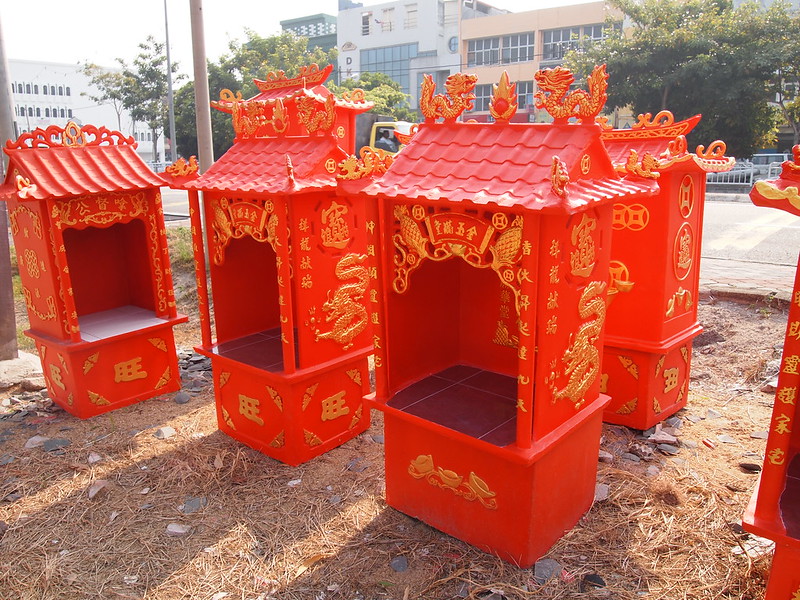 When did people start building tiny prayer houses? Was it when the first wave of chinese migrants came over in 1905? The lady at the factory told me that this is definitely not something brought over from China, and that it was mainly only a practice of Chinese people living in Ipoh/Perak. She did conjecture that Singaporeans did not have it because of space constraints, and that some malaysian chinese opted for these prayer houses because they could be situated outside of their houses and thus not be a source of dust in the house. I wondered, was the use of normal house floor tiles intentional on the base of these tiny prayer houses? Or did people build this because they wanted to have a relic of what houses in China were like, because the houses in Malaysia are sure very different from the houses that one might have had in China! So many unanswered questions! 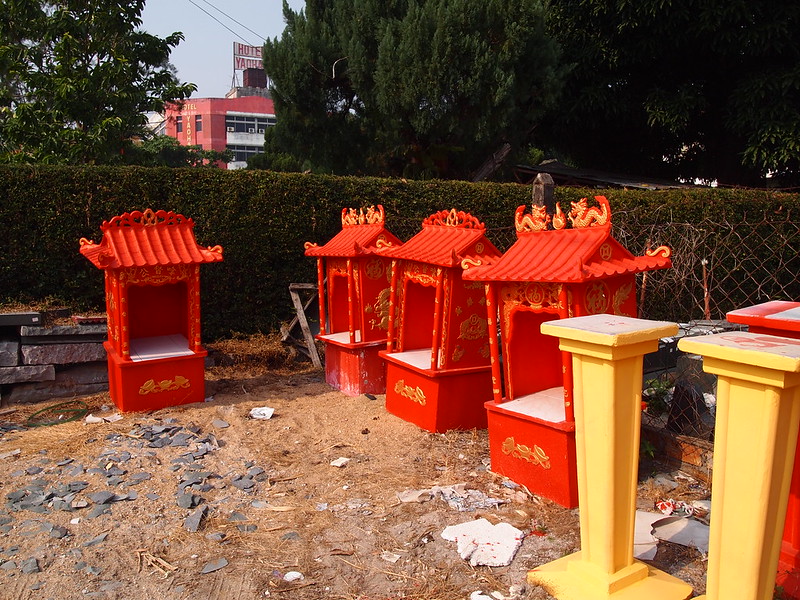 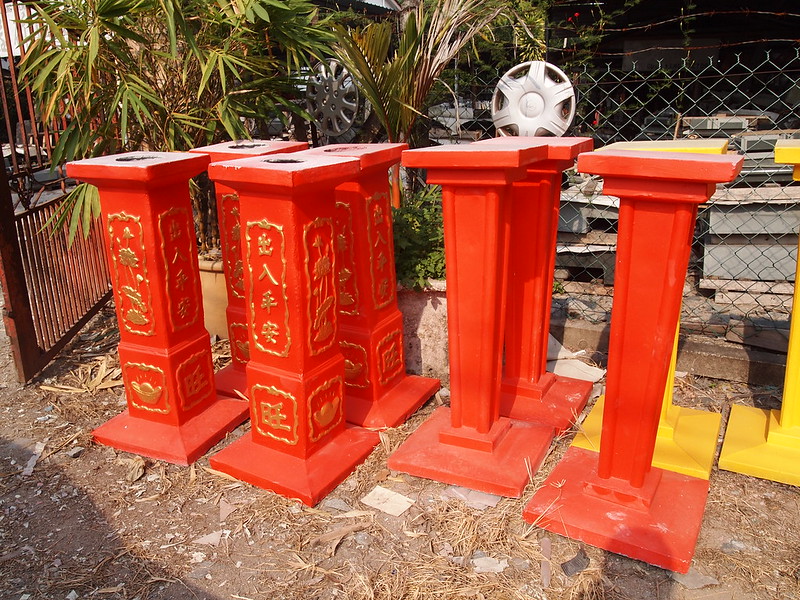 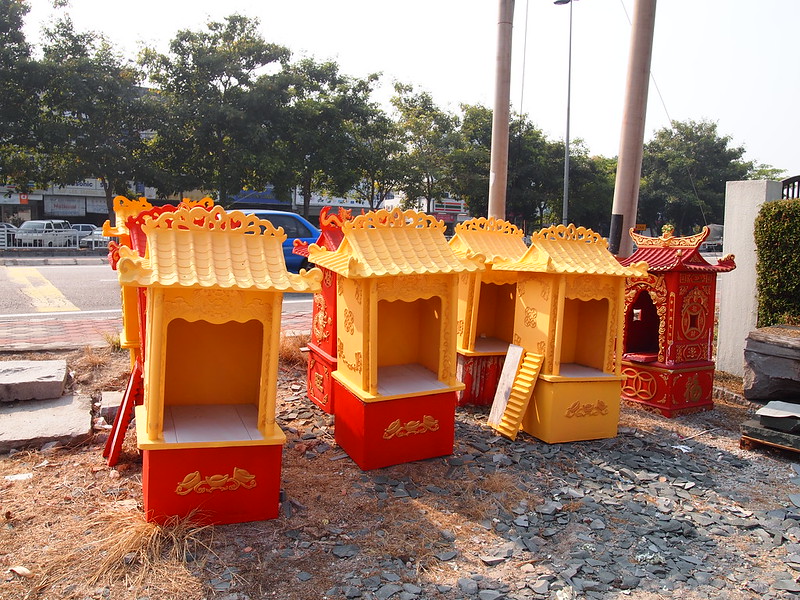 Not to be left out of the action, Indian Hindus can also get their own yellow prayer houses. The lady at the factory told me these yellow ones were indeed made for Hindus. She could not explain when exactly the Indian Hindus started getting prayer houses made, or how the malays, chinese and indians managed to influence one another in their religious worship. So this is basically all a mystery to me. Also, DO NOTE THE BRAND NEW TINY STAIR LEANING ON ONE OF THEM. Right now I am imagining people’s possible conception of God…. in a tiny tun of dust, or a grain of sand! Being blown up the tiny stair into the tiny prayer house so the earth god can feast on the offerings. Why is this tiny prayer house made in this very particular size anyway? How big are the Chinese earth gods and Malaysian Na Tuk Kong thought to be? Does he really come in the form of small rocks and structures?

Would anyone more knowledgeable about all this care to enlighten me on this practice of keeping tiny prayer houses?… 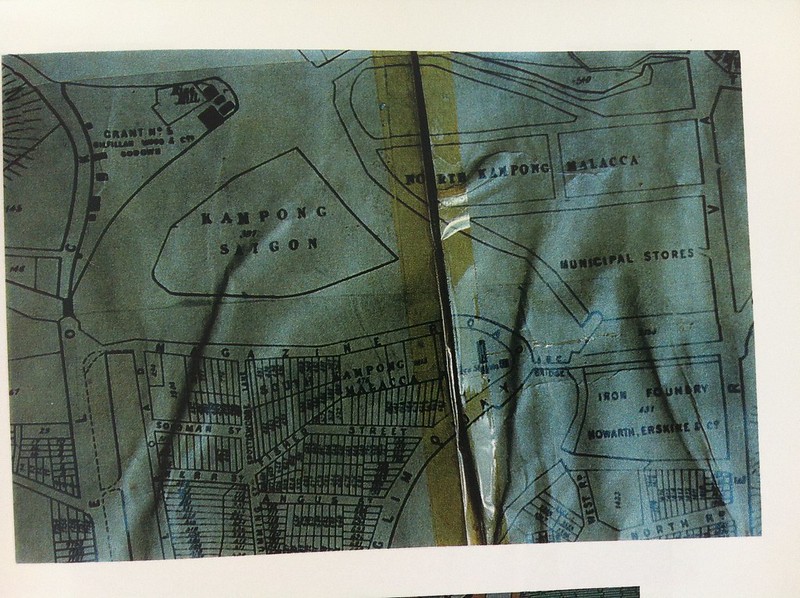 A photo of a photo of a torn map of Kampong Saigon… Last year whilst at the library,…
Debbie Ding 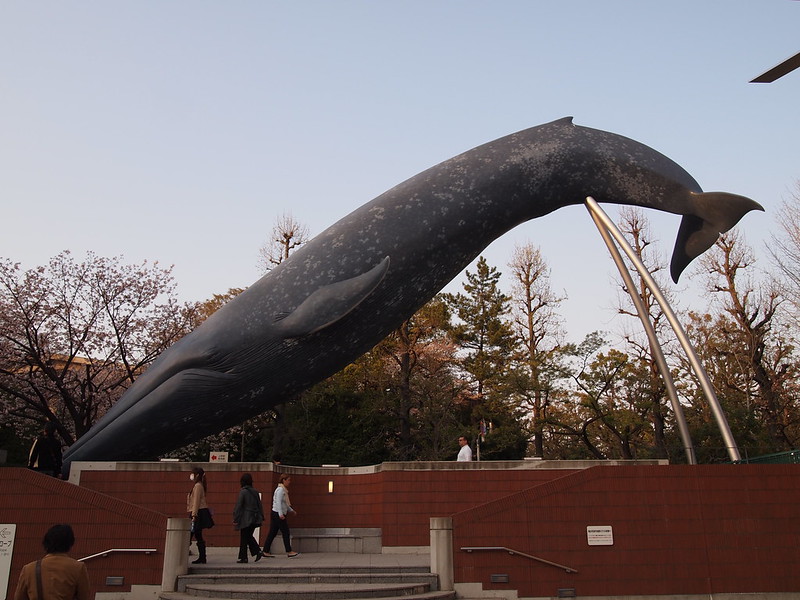 There are a number of museums and attractions in the vicinity of Ueno Park, but out of all…
Debbie Ding