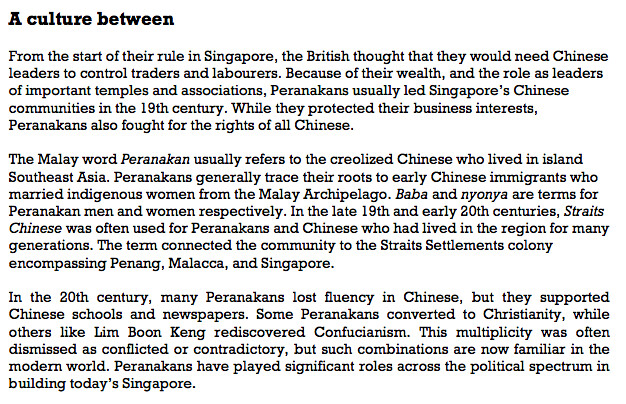 Yesterday night I did a whirlwind tour of the Peranakan Museum during the Night Festival. Halfway through I became very confused at what I was looking at; I had to turn around and go around looking around for the definition of Peranakan. I even went from the top floor to the bottom floor to look through the flyers at the ground floor, but my confusion increased amidst the thick Night Festival crowds.

From the exhibition guide to “Great Peranakans”
It is noted that Peranakans refers to “locally born” straits chinese who retain their chinese names and some cultural elements – but who have also embraced malay culture and hybridised it into their own at home. It is also noted that Peranakans were “differentiated” from the rest of the China-born chinese in Singapore because most peranakans tended to be from a higher socio-economic class, and were favoured by the british for their loyalty and fluency in English.

This baffling and preposterous list seems to suggest to me that one becomes a Peranakan by being an ethnic chinese who has many business connections and is very rich and influential and is adaptable to both malay and british culture. The long descriptions for the influential Singaporean Chinese who have been considered “peranakan” shows that whilst some married in or were the descendents of the initial group of 15th century Straits Chinese, many others simply became peranakan just by being really rich and powerful in their dialect communities, and most importantly also were validated by the British authorities as being community leaders.

Our general confusion in what constitutes the definition of “peranakan” seems to have been foreshadowed by the British confusion and difficulty in defining chinese hybrid identities, yet formally requiring some “name” or term to differentiate the original straits chinese (whom they could trust and give power to) from the newer chinese migrants (whom they thought of as being poor, transient, less loyal and more ideologically dangerous).

Before this, I must confess that I knew very little about who was Peranakan in Singapore. The day before I had been at NUS Library (still undoubtedly the best library in Singapore) and I had picked up a paper by mistake about the decline of the babas (babas refer to peranakan males, nyonyas refer to peranakan females). The title was very long and poetic so it attracted my attention and I skimmed through it quickly. I took a picture of one of the pages because the lines jumped out at me: 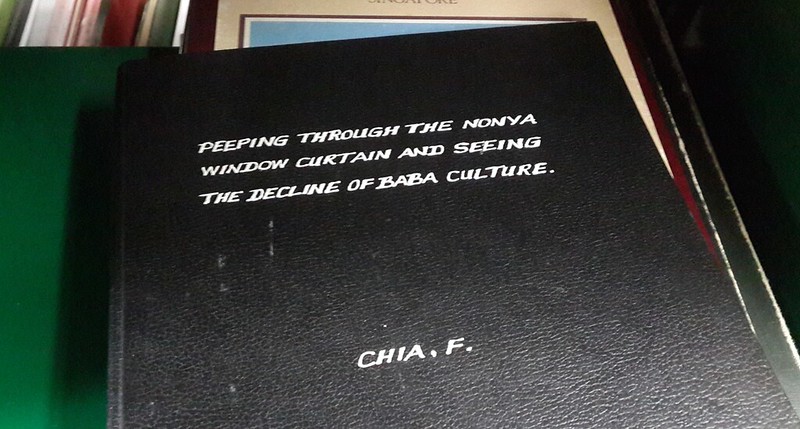 …their culture culminated in their unwitting rejection of their culture as they waved the “banner of modernity” at their elders… The question of money too played an important part in phasing out of the old-style baba wedding….

If the identity of the peranakan is defined by its flexibility and adaptiveness in hybridizing the chinese and malay cultures, then why isn’t it more prominently mentioned everywhere that this same adaptiveness also involved money! Being rich allowed one to ostentatiously spend on cultural objects, and fund the creation and design of hybridised cultural objects. And another thing is that it clearly involved becoming modernised, or in some part perhaps even being an anglophile? What

What I am disturbed by is: why does the Peranakan Museum seem so fixated on displaying the aspect of it being an asian fusion of malay and chinese? What of their westernisation, and their willingness to embrace modernity? Isn’t this foresight and embracing of modernity something which predisposed these ‘peranakans’ to becoming shrewd businessmen and community leaders? Is the notion less marketable as a ‘cultural attraction’ if the peranakans are also seen as being ethnic chinese who basically modernised and absorbed BOTH malay and british culture?

I mean, I am a locally born ethnic Chinese; I only speak English with my parents; I cannot speak Hokchew dialect and feel no direct connection to my Chinese heritage; I can speak a smattering of functional malay words; I often eat and cook malay/indo/chinese fusion dishes at home; I’m self-confessed anglophile who spent four years studying English Literature and another four years (so far) living in London; perhaps if I tried I could pull off the outward pretense that I’m somehow becoming richer and more influential and more upper-class (hur hur hur).. so..

On next week’s reality tv episode:
Debbie has announced that she has decided she is becoming Peranakan and tries to get George (British Person) to validate her Peranakanism so she can design and throw a lavish peranakan wedding. But George has other ideas. And where will they get all that money? What will happen in the next episode of the Great Peranakan Dream? Stay tuned to find out…

The Keywords of Beijing