Early this year I was approached by Singapore Art Museum to develop a data visualisation × art project in Jurong. I’ve been teaching Interaction Design for quite some time and thought it would be great to involve my students in the project since the project’s intentions was about co-creating and shaping the work together with communities of people.

The story and the place

It seemed that oil and industry was a big part of the narrative of Jurong, although for most residents – this was only glimpsed from afar and through the media. There was much curiosity about the caverns, and I had found this rather aspirational looking photo of the groundbreaking ceremony of Jurong Rock Cavern – which I later discovered to be a set piece. 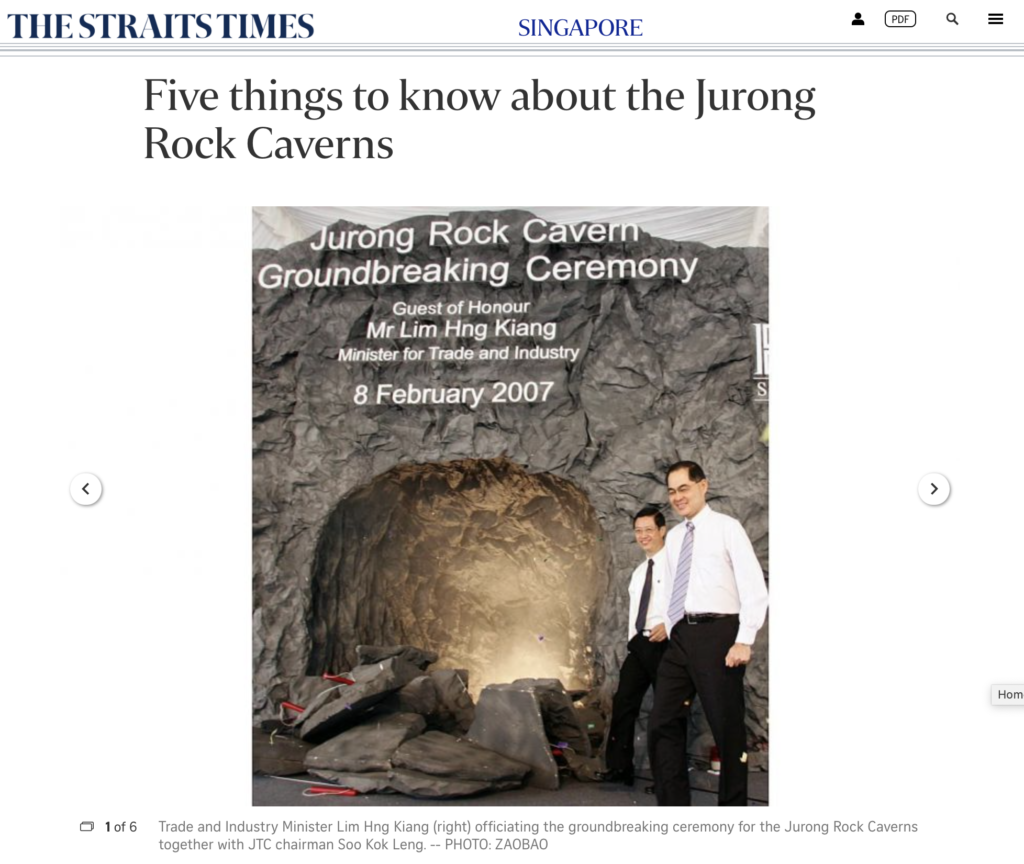 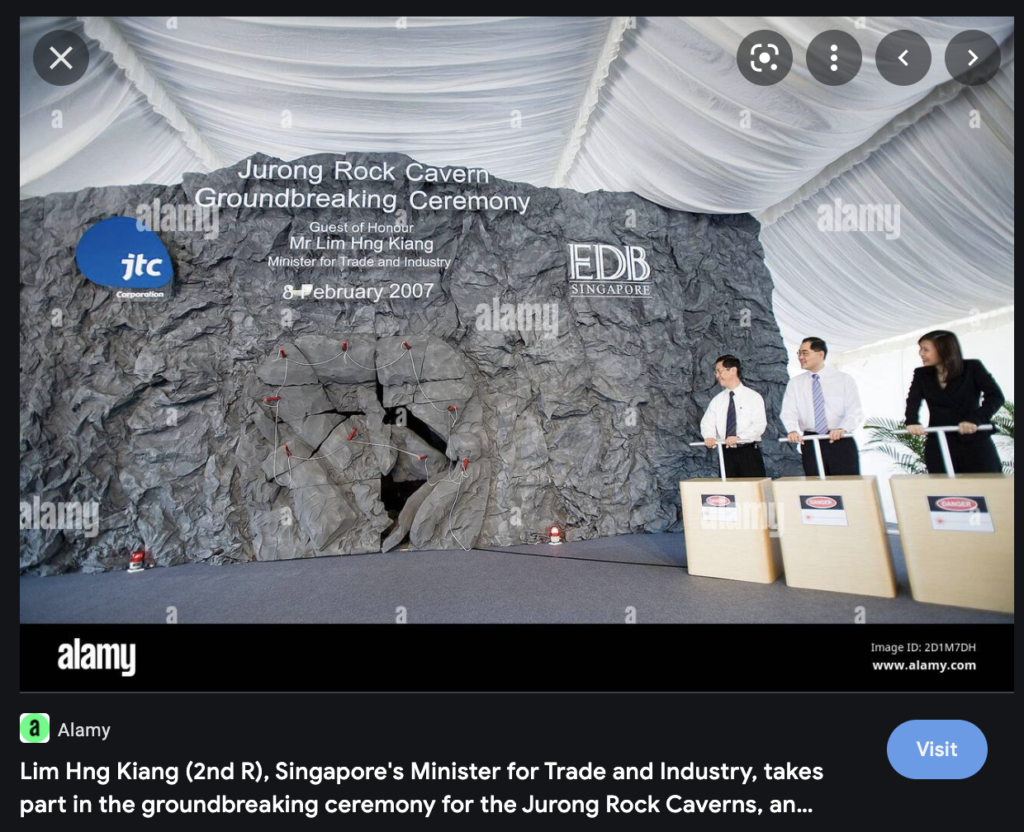 I really liked this image of the set piece for the Jurong Rock Caverns (a giant commercial underground rock cavern facility for the storage of liquid hydrocarbons ie: things like propane, butane, and ethane which are produced from crude oil). This particular picture and set piece could be reinterpreted in so many different ways – the set piece could simultanously represent the reality of this actual groundbreaking ceremony – and another parallel reality where we imagined a completely different Jurong:

During tunnelling works for the upcoming Jurong Region Line, discoveries of oil were made under Jurong. Using new tools of modern computational archaeology which allow for remote sensing and deep earth scanning even under densely urban built areas, Jurong was discovered to be located on top of a significant discovery of oil.

The Singapore government decides on compulsory purchase of the buildings in the area and residents are relocated so that Jurong can be mined. Residents are forced to vacate their homes in Jurong and relocate.

On the site where the flats once stood, there is now an infinite deep mine shaft. As you slowly descend the mysterious, infinitely deep cavernous mine shaft, objects from Jurong’s past and present can be found in the layers of the rock strata. The residents come to visit the tunnel, they ask, “What is Jurong?…”

The inspiration for a story about striking gold with oil came from an article from the FRONT PAGE of the Business Times on 1 April 1985. You may want to ask me where I randomly discovered an article from 1985 and, well, so I went back to trace my, ahem, browsing activities on 1 April 2021:

Er…Tiktok, how did you know I like to read about history on my FYP? Thanks @historyogi 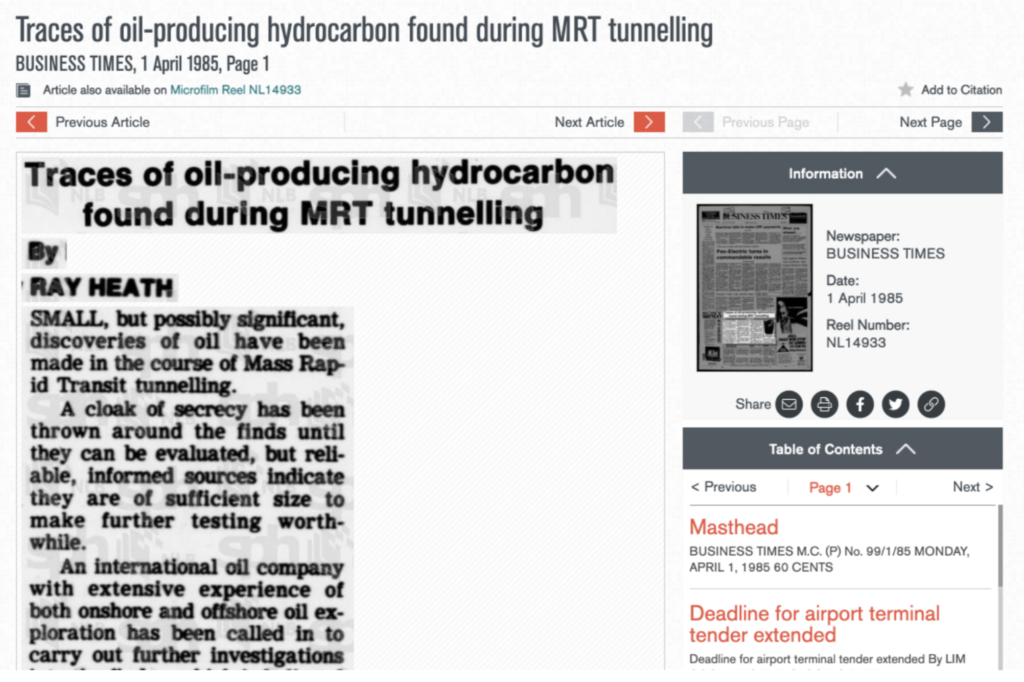 This was a set of articles which included repartees from the “public” declaring themselves vindicated and demanding the halt to MRT tunneling works so the investigation for oil could be conducted. And I thought that at a glance, this could easily be reinterpreted at face value in so many different ways. What if this article was about Jurong, as the Jurong Region Line is being constructed? (Jurong Region Line will be Singapore’s 7th MRT line and is currently targetted for completion in 2029)

A visual reference that I gave to my students was this video from “HUGE DANNY” / Danny L Harle / DJ Mayhem, directed by Sam Rolfes & Andy Rolfes. Also, because my 2-year old is obsessed with this video, I may have watched this hundreds of times, and now I too want to freefall down an epic tunnel whilst chased by a monster with a big redhot hammer…

Another obvious visual reference are these big pipes along J-walk which I brought the students to visit because they contained some historical information signboards about Jurong. Curator and longtime Jurong resident Kenneth Tay had brought me to this lovely public space with giant balls that glow at night, and the students eventually shot their video in one of these tunnel pipes shelters…

“Tunnel” has also entered my 2-year old’s vocabulary whilst I was working on it. I hadn’t realised there was a “tunnel” at the playground (at my parents’ house) until she started crawling under the hole under this bright orange plastic wall.

Since the image of the tunnel “set piece” was such a big inspiration for the work, I thought we should try to print a “set piece” as a small sculpture – one that was fairly obvious as artifice.

I did some test prints in PLA, but I also had the chance to use the Eden Stratasys printer at NYP, which uses Veroclear, a transparent polyjet resin which is solidified layer by layer using UV light. 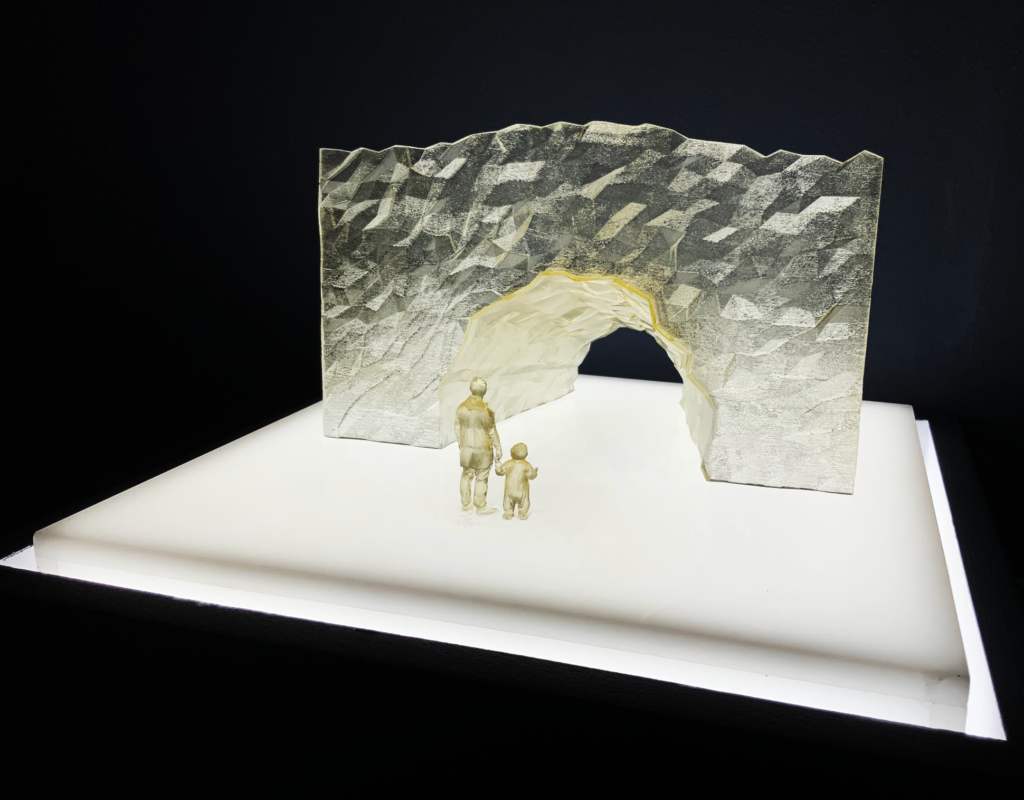 For the Unity project, I suggested to the students that they could construct the tunnel out of a series of tori (ie: plural for torus, or colloquially, you could also just say DONUT). That way there would be some space inbetween to position some lights and objects in the “strata”. In Unity, the whole column could be scripted to “ascend” in order to give the illusion of falling and then when it was high enough it could trigger the spawning of a new tunnel below so that it was an infinite tunnel. 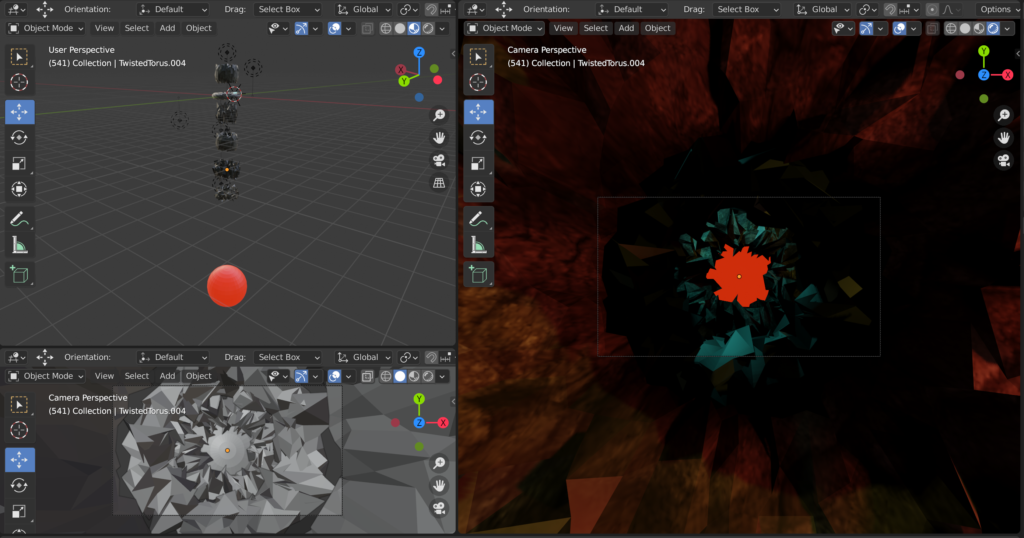 The super basic torus demo that I gave to the students, which I made during a lunchbreak

Funny glitches were possible if you didn’t restrict the rotation of these “tunnels” and if you altered the speed of spawning in a way that allowed multiple tunnels to spawn and then collide against one another. Here’s a hilarious outtake of the tunnels spawning out of control: 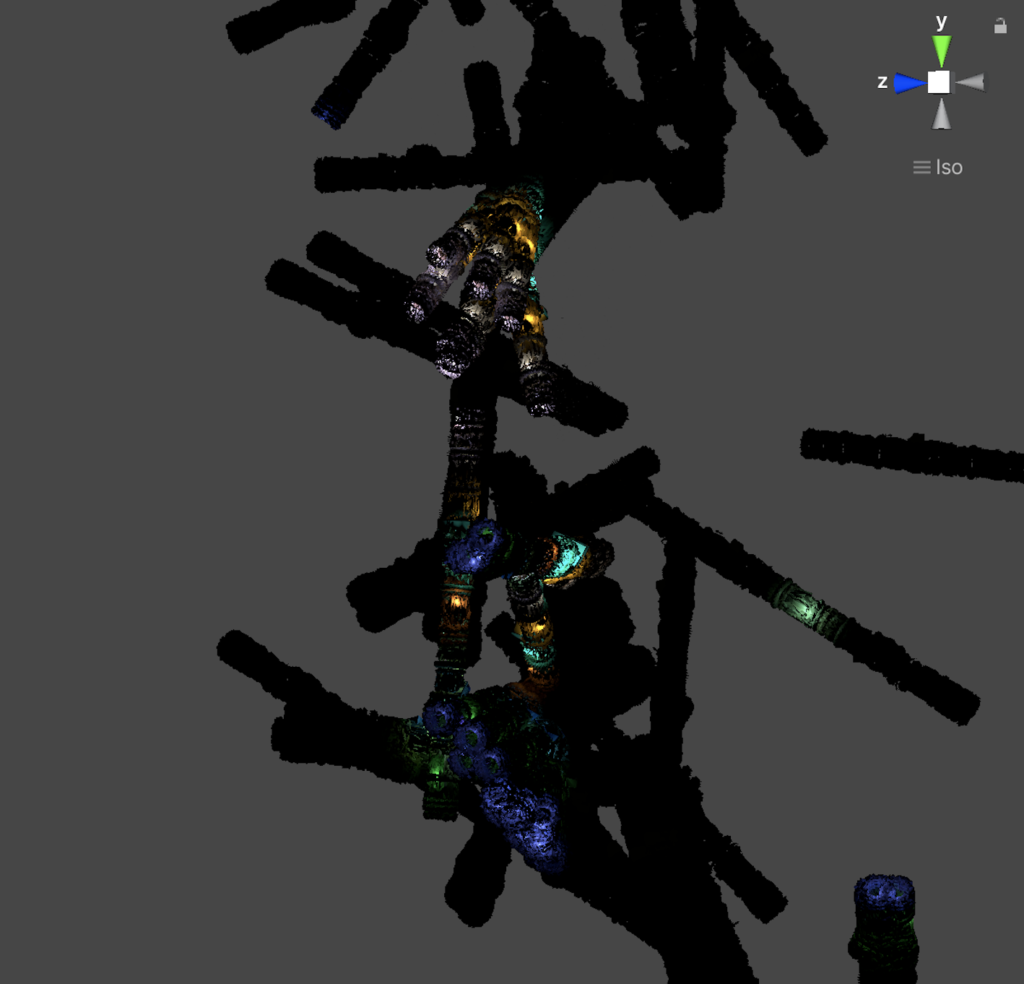 Although one way of making a digital artwork is to be aim to be precise and to achieve an extremely specific vision, I also feel like if I had more time I’d just spend it messing about to find visually interesting effects and glitches, even in the editor screen directly… intriguing screenshots from the Unity Editor view… 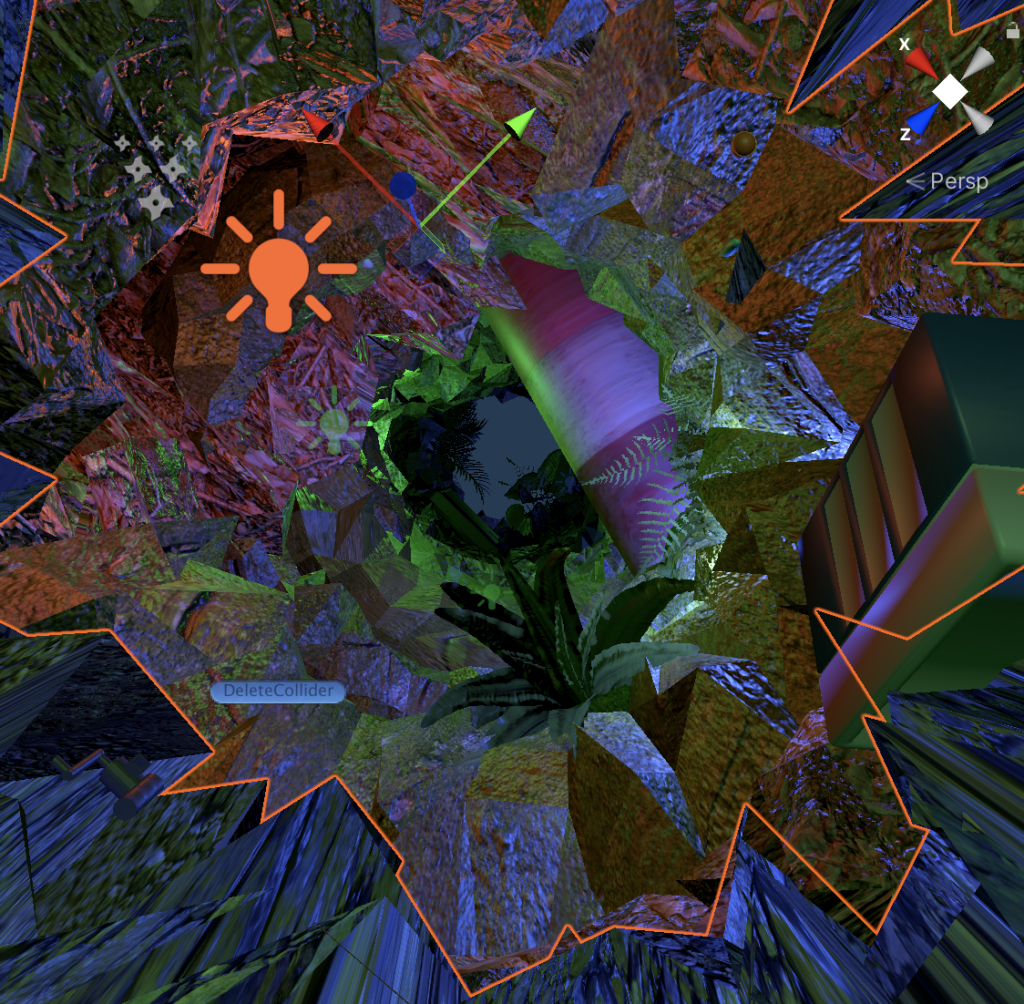 Who says we even have to descend in a well-paced, linear fashion? Everyone needs the option to have more chaotic energy in their life! If I have more time, I will figure out a way to give the viewer a more… exciting… way of navigating this space.

Manually looking around in the Scene editor view (right) during descent

I really quite enjoy the outcome with a circular framing and I think I might use it more in the future for other works. But… I may have done the feathering/frame in a rather unorthodox way though, because i wanted the particles on top of everything (but also coming from underneath). So… I created a cutout layer with an unlit black material. So far, it seems that visitors love the particles, because when you see the work in person, the particles will float over you and draw you into the work… 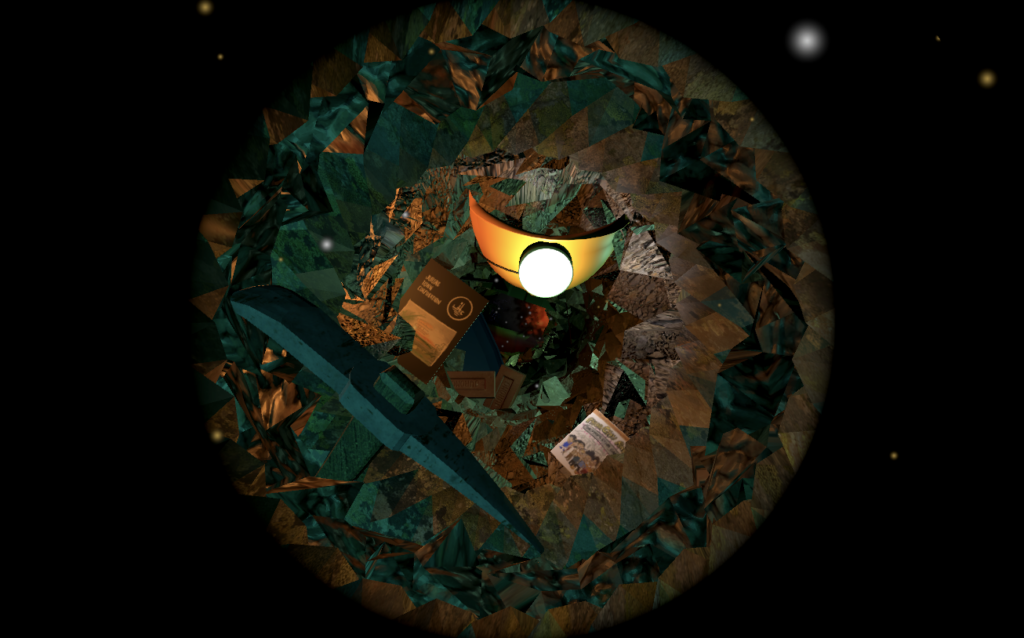 Particles floating over the feathered framing

This screenshot shows the truth of how I did the cutout framing <Insert sweatdrop emoji>. Yes, in a very adhoc manner. But it does seem to work to produce a perfect unlit black which allows the dust particles to be seen only if they are above the cutout.

Originally, we had hoped to do the consultations in person but due to Covid safe distancing everythings, we had to do a public consultation online instead. The students designed the questions to be fairly open-ended and we collected the responses from the public, hoping to find some interesting keywords which could be translated into visuals. The students 3D modelled some of their own objects, and then I 3D modelled the objects from the public. Here’s a sneak peek of the type of textual responses we received, which were then used to populate the objects embedded into our tunnel’s layers.

One of the items in the list is this CDROM of a Phua Chu Kang Virtual Sitcom Game, made by NYP’s Digital Media Design Centre in 2001. The DMD programme was the direct forerunner of the course (Diploma in Interaction Design) that I am currently teaching at, and after informally asking about, I discovered that I actually do know some colleagues at work who had worked directly on the project 20 years ago! Such serendipity… 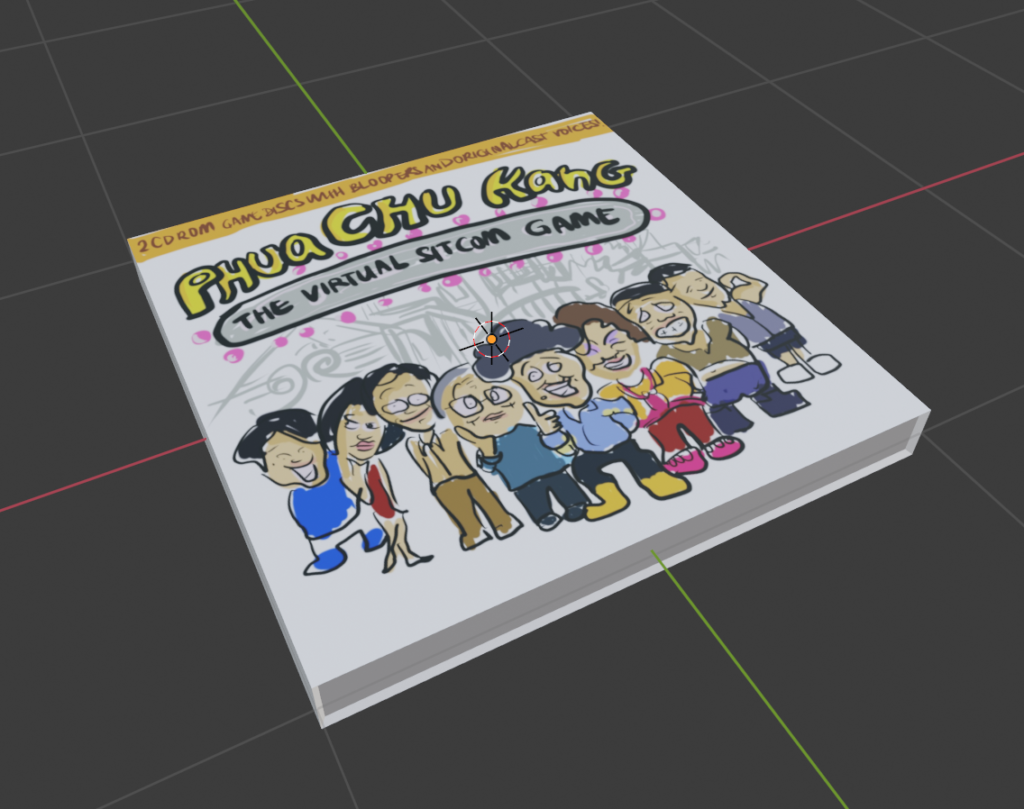 You can also see and interact with other 3D models in the project here:
http://dbbd.sg/jurong

Usually when I work on a show I like to mockup the space in Blender quite early on, so these are the images I made, blocking out the space for the work: 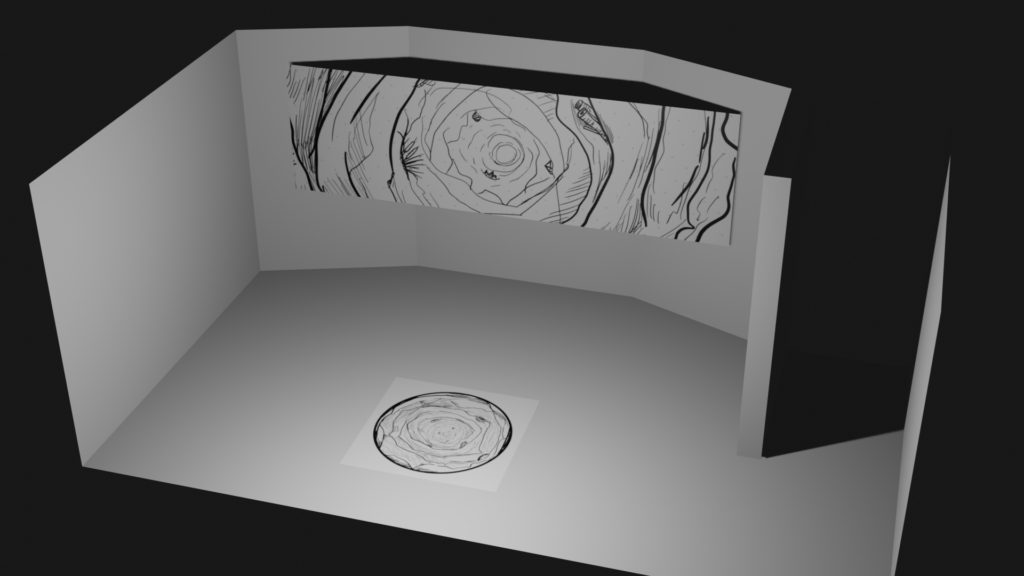 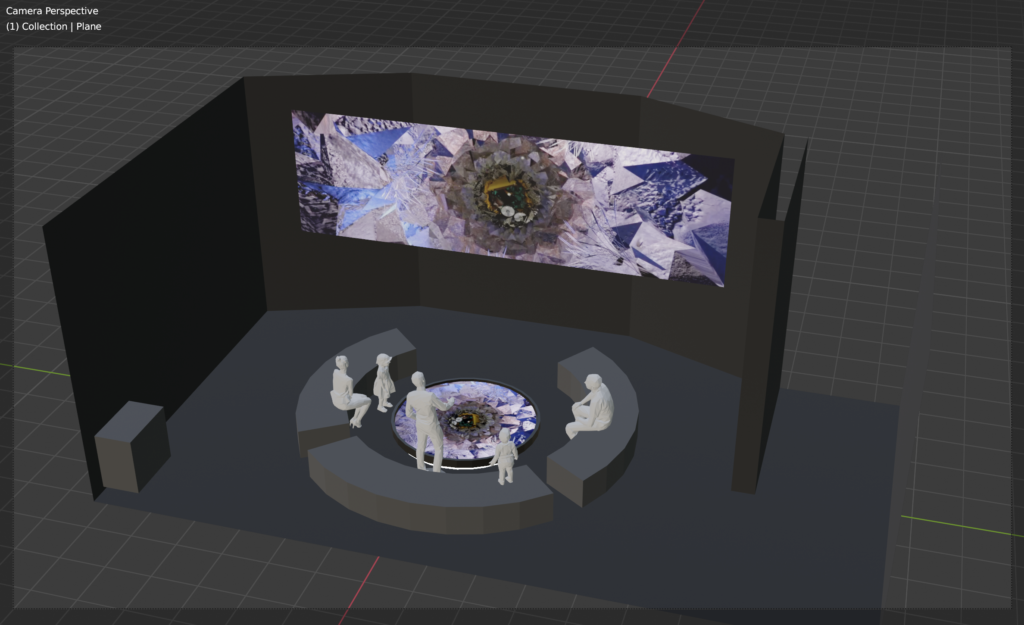 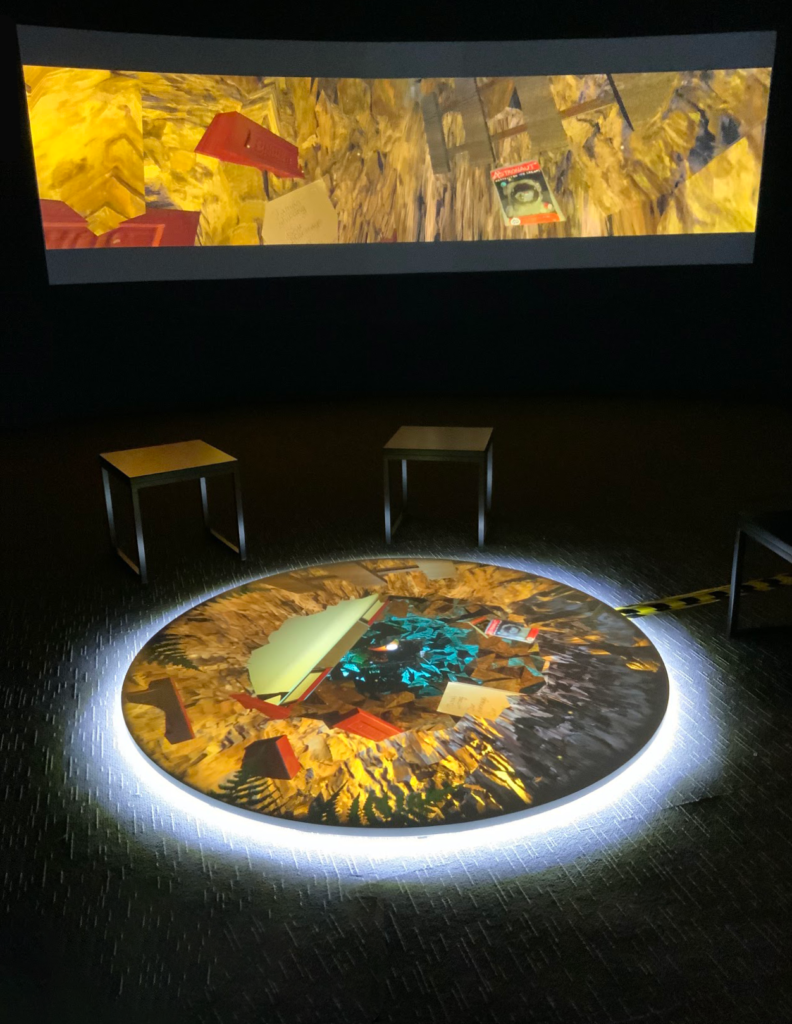 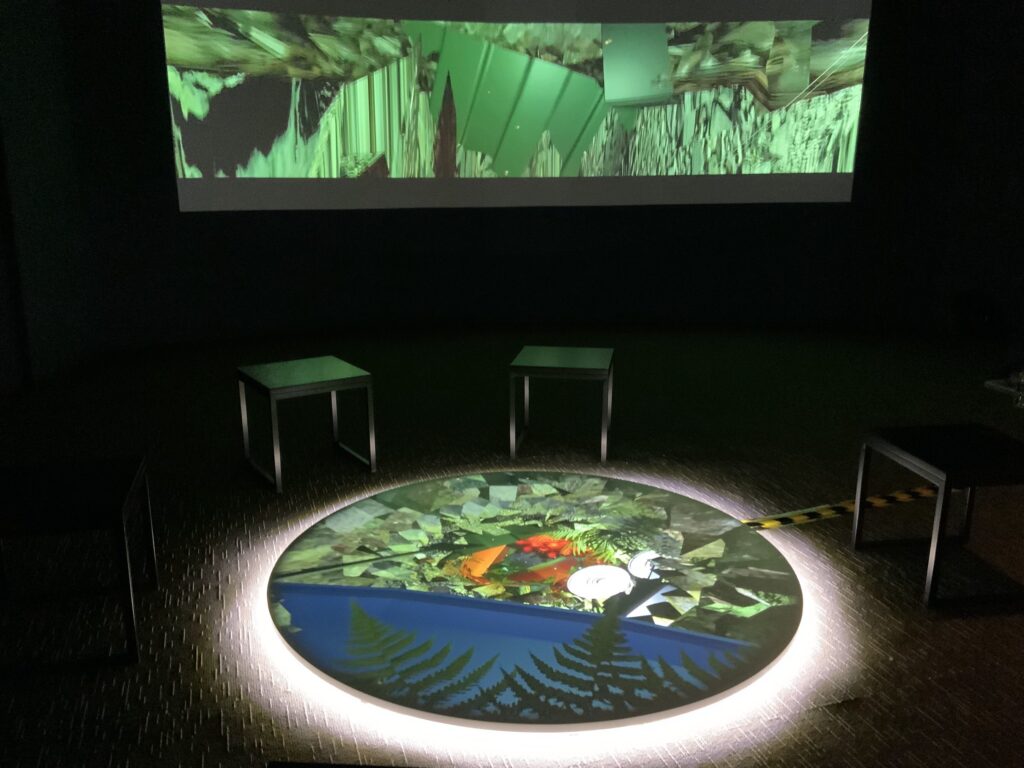 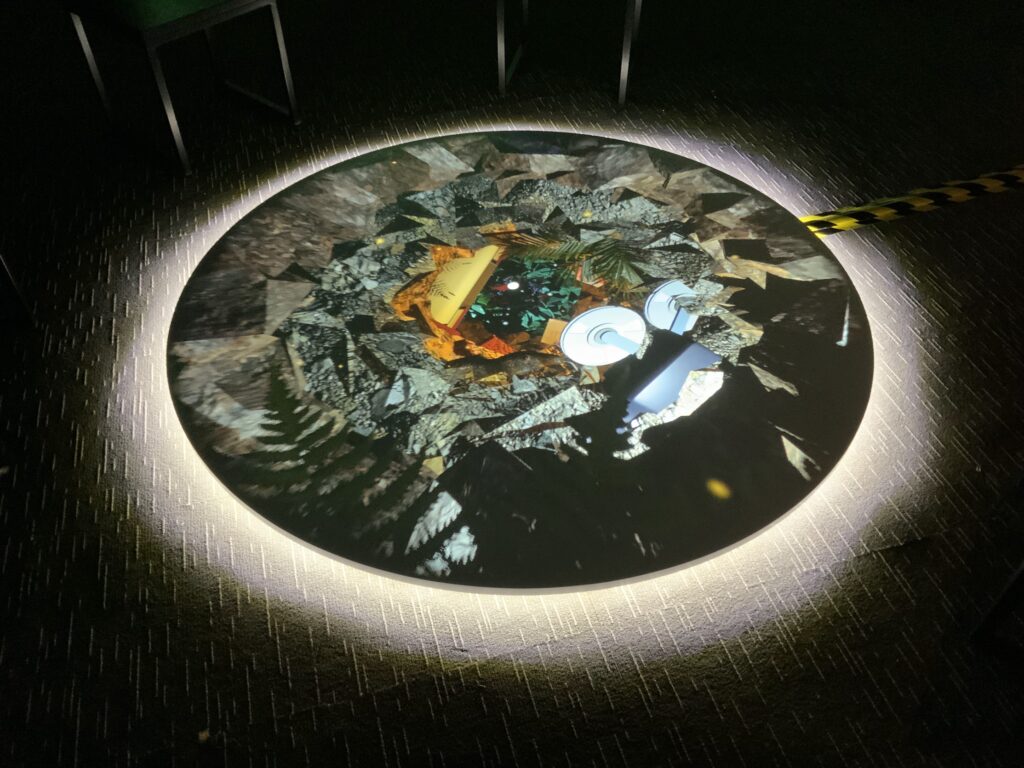 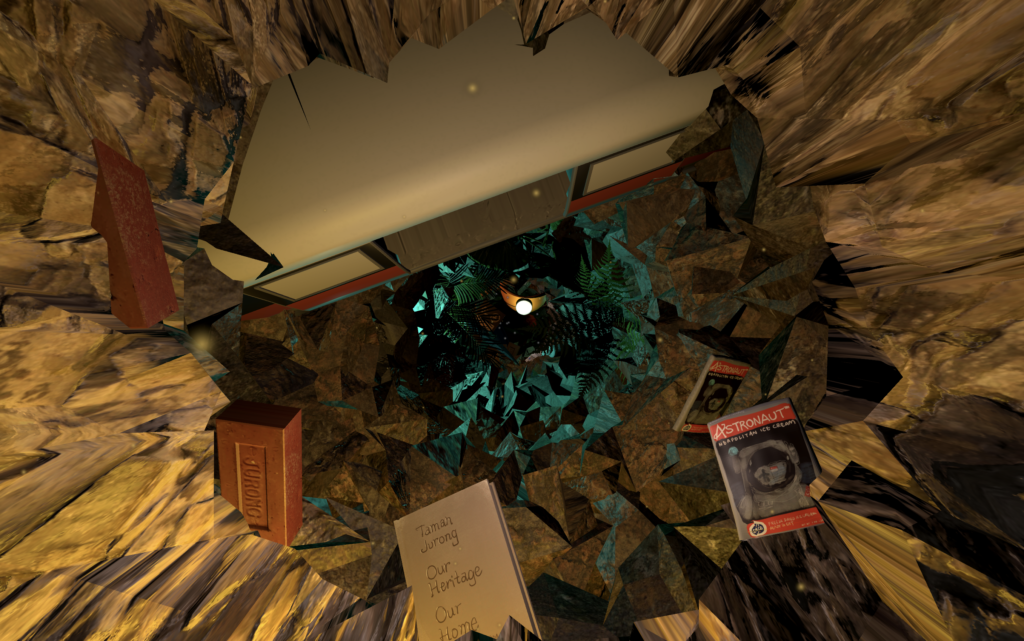 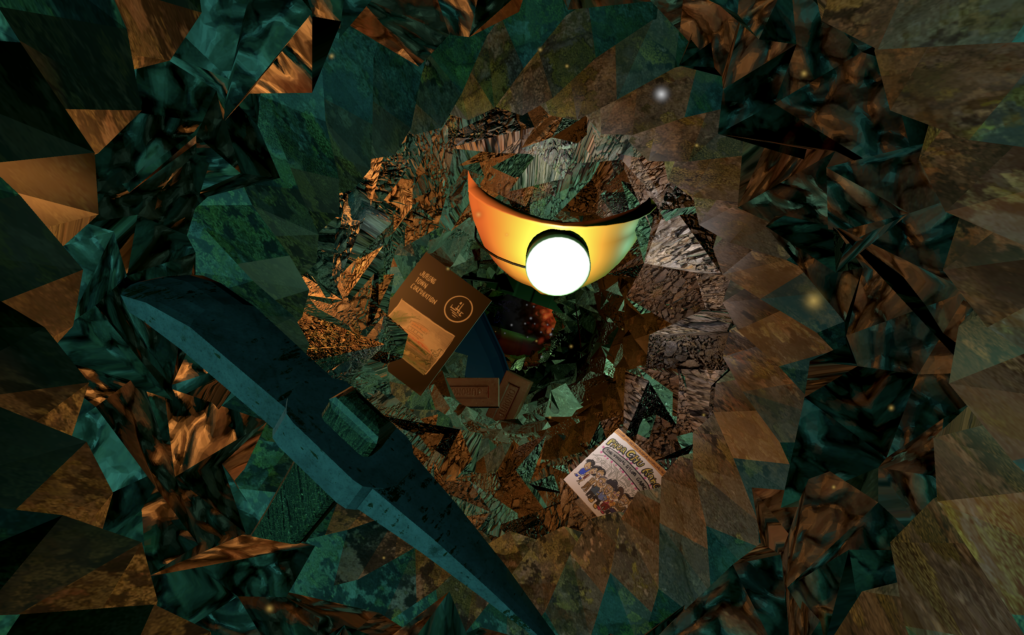 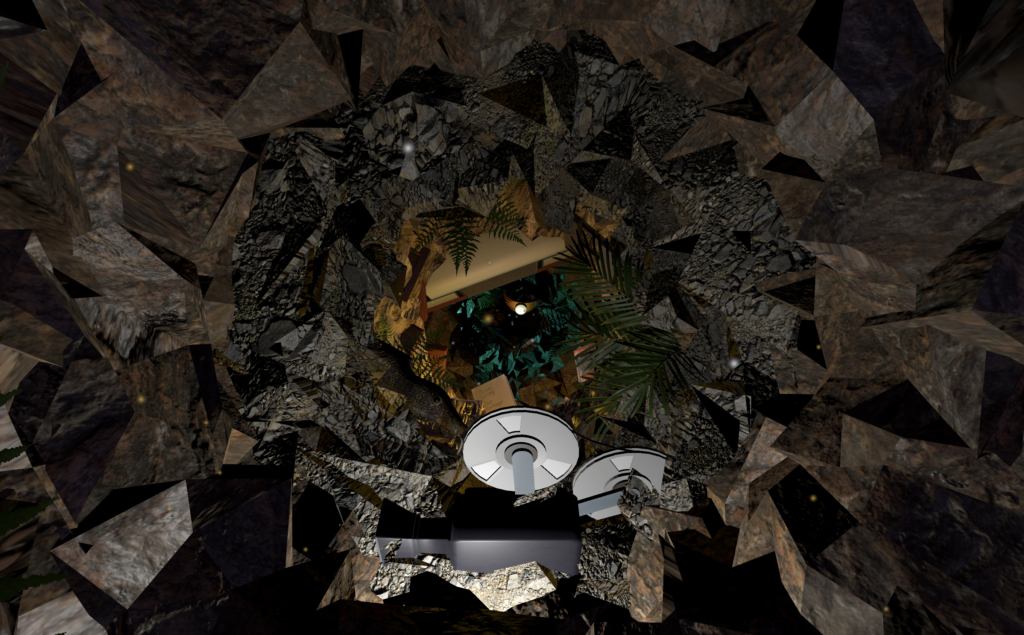 You can also view the objects up close here: https://dbbd.sg/jurong/

Thanks: Many thanks to everyone who has made this exhibition possible especially Singapore Art Museum: Kenneth, Pauline, Larry, Ain, Gabby, as well as Zeff & team. And of course, thank you to my Interaction Design students for working together with me. We had two project periods of final year students working together with me – the first group were free to prototype their creative ideas, and the second worked directly on the production of the work. Jeanie, Jun Yee, Shing Hwan, Victor – whose prototypes may not be shown here but whose explorations have informed the approach and direction of the project (and also helped me understand the challenges for this project). Caelan, Geraldine, Jia Qi, and Ray – who designed and developed the bulk of what you will see on show today.

Events! I’ll also be doing some talks in January with curator Kenneth Tay. More on that soon!…