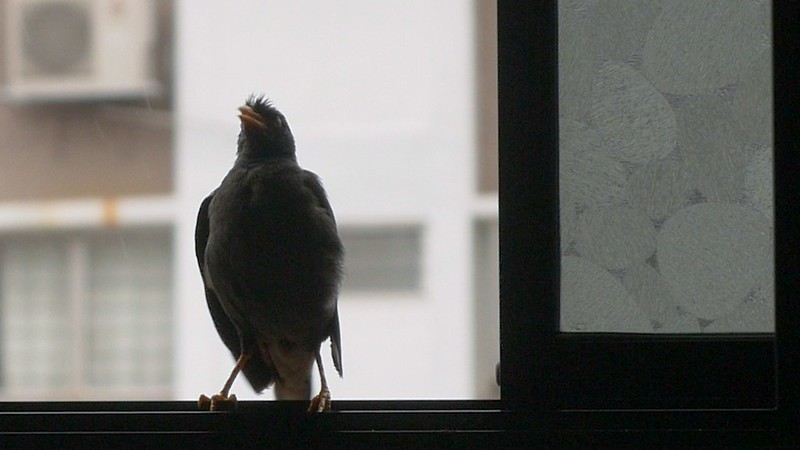 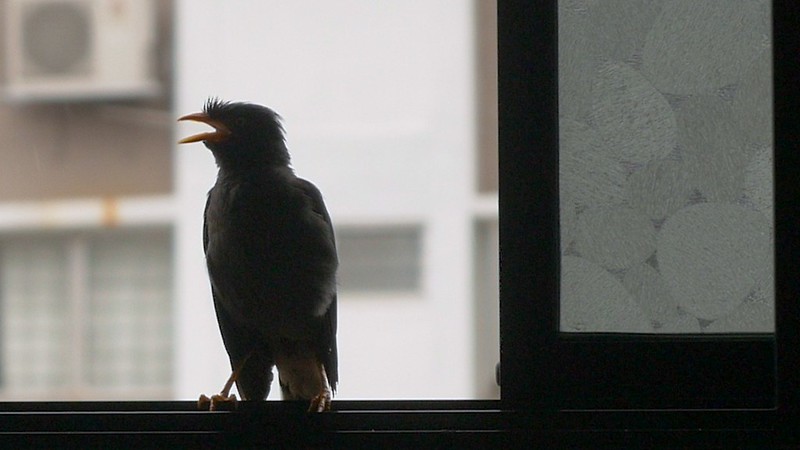 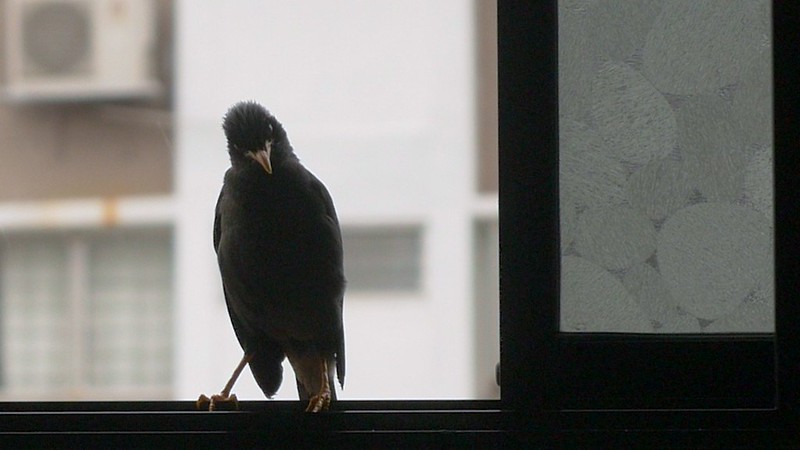 Bizkit is a javan mynah living in Ang Mo Kio who has been flying into our flat every other day to eat biscuit crumbs, noodles, and other scraps from our kitchen floor and kitchen sink. Although all the javan mynahs look exactly the same, we think that there is one unique Bizkit who is especially bold and unafraid of us. Some of the “Bizkits” come in pairs, but they also give us a very “guilty” look and scoot off the moment we walk into the kitchen. But there is one original “Bizkit” who does not seem afraid of humans at all and will even walk all the way to the threshold of our living room, even if we are in the kitchen itself. This post is about that Bizkit.

Bizkit likes biscuits, noodles, cooked human food scraps, and oil. The Bizkits also have an unhealthy interest in plastic bags, probably because they know that humans often put their food inside plastic bags. The food itself needs to be small enough for Bizkits to eat, and if its not small enough the Bizkit may pick up the food with its beak and then hit it onto the counter top or drop it onto the ktichen floor until it breaks into smaller components that it can swallow in one go. The Bizkits are surprisingly quite good at using tools which they pick up with their beaks. We noticed that Bizkit doesn’t seem to be interested in the healthy options we have offered in our household – chopped carrots or chopped fruits are only begrudgingly eaten and in fact most of the Bizkits will sit in our house and make loud, almost shouty sounds at us if there are no unhealthy oily food scraps left around. Its like they’re complaining at times.

After eating our crumbs, Bizkit will usually noisily wipe its beak on the window sill, fluff up into a ball, and chirrup a little. We’re not sure what the beak cleaning means, but some papers suggest that when a mynah bird is unable to complete the task it wanted to complete, it cleans its beak as a passive aggressive act. Or maybe a simpler answer is that the Bizkit’s beak is just dirty after it pokes around our kitchen to find bits and pieces.

Recently Bizkit developed a pink growth near its beak and I became worried it was the sign of an illness or tumour, but hopefully it is just a skin tag and something harmless that Bizkit will live through. These birds are wild, impulsive, and very bold, and it is apparently said their lifespan is about 4 years in the wild. They’re the kind of birds which are so curious that they will be the first to investigate roadkill, but in the process may become roadkill themselves. And if these javan mynah birds fight, its often a fight to the death! Apparently if they were kept away from the inherent dangers of urban life, their expected lifespan would be closer to the range of 12-15 years.

I don’t know how much longer we’ll be living in this flat, but for as long as we’re here, I hope to hear the familiar chirrup of Bizkits in our kitchen for many more moons!

Pictures of Bizkit are by George