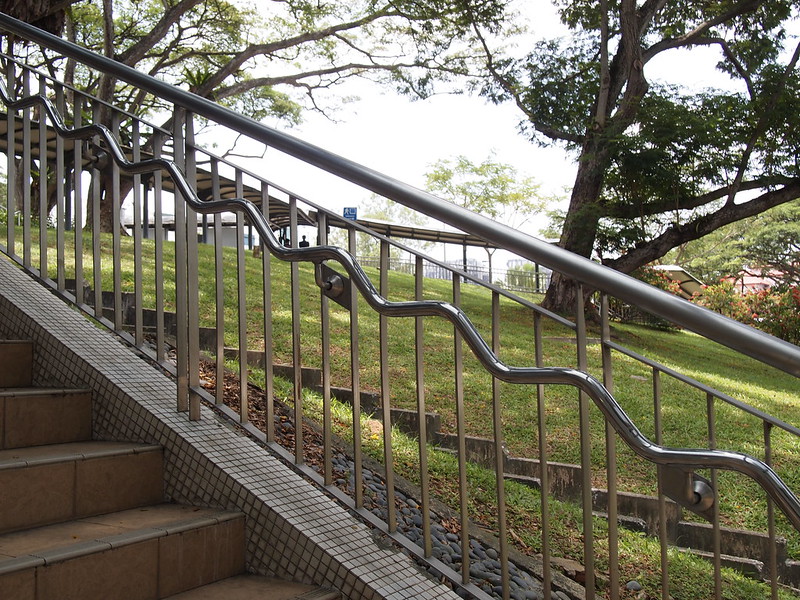 Several events conspired to keep me from writing here in the last few months; first, we found a beautiful new flat and moved to a hill on Haringey, where I ended up without internet for some weeks before travelling to Singapore and France, meaning that I was forced to tether to the slowest mobile internet in the world in order to send massive files to various printers and people, meaning that there was no bandwidth for uploading photographs and no time for my frivolous warblings on this blog.

ANYWAY! I’ve got a big backlog of writing to push out here, but I wanted to start off with a story of a curious handrail I saw at the National University of Singapore (my alma mater) when I was back there in March…

I was very amused by this redundant handrail design at Yusof Ishak House. When I saw it for the first time, I was not even sure if this was some practical joke or art installation of a handrail – for it was an awkward design for a handrail, and it wasn’t even properly secured to the wall. If its in the same shape as the step below it, then how does one expect to run one’s hands up it for support as one walks along? Who on earth made this handrail, or ordered its installation here? 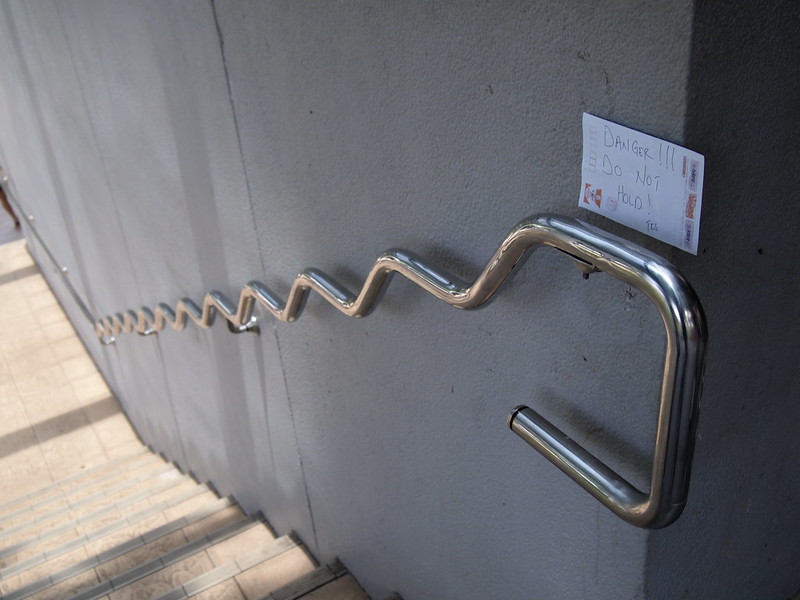 Someone had taken the initiative to warn users of its dangers – but only at the top of the stairs! (Too bad for the people at the bottom of the stairs)

I have always thought it apt that both National University of Singapore and Nanyang Technological University are constructed on hills and sloped land; I’ve spent significant time in both in the past and associated the stairs and slopes with a kind of semi-leisurely pursuit of knowledge – procrastinating on school work by obstinately lying down on the slug and ant infested slopes of NUS’s AS3 for a picnic, scaling the turfed roof of NTU ADM and peering over for a laugh, conducting midnight walks to test out the urban myth of the “yellow line” which runs from Arts to Science; conveniently idle explorations of each universities’ geographies as momentary distraction from one’s studies.

I’ve been reading the writing of Claude Parent and Paul Virilio on the notion of the Fonction Oblique (Oblique Function), in which they eschewed the verticality of cities for slopes and oblique planes. They propose an architecture of disequilibrium, using these oblique angles to express a kind of dynamism in the space – by changing our relationship with the horizontal. The idea would be that you would no longer need to find a chair, you only had to lie down on the slope; the stairs would be redundant if everything was constructed in angles, where we would be challenged to scale these ramps on our own. The conventional notion of the door, wall or pillar and so many other things would potentially be transformed if we thought of it as a “domestic landscape” and designed everything in an oblique fashion. 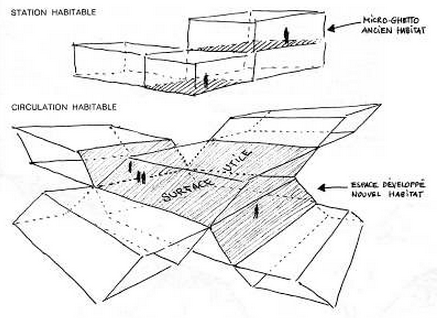 On an aside, it explains why I like the Rilakkuma bear so much. It is never pictured with furniture, yet it is always at rest, lounging in abstract space. It doesn’t need a chair or sofa because it can just lounge on some imaginary sloping surface. As a consciously designed toy character, it was made to convert any surface into “a napping space” with its body. 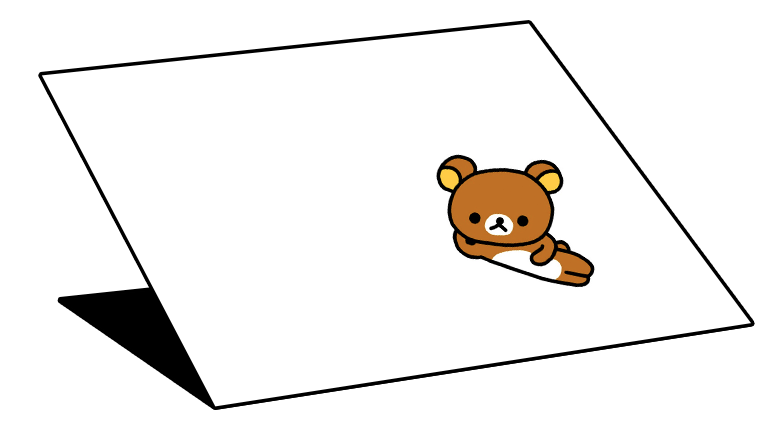 I suppose I am attracted to the idea (or reading about it) partly because for me the slope cannot be separated from the sensation of vertigo. I suspect that I experience more vertigo than the average person – it is something I’ve developed only in adulthood and for me it is a complete mystery where it came from! I feel a lurching sense of vertigo in moving lifts, on swings, whilst standing on breakwaters or on piers, and am consistently reduced to crawling on all fours on anything that is a little more steep than usual.

In recent years I have developed more and more vertigo, to the point where if my feet are completely concealed from my view, then I cannot balance or even ascend or descend a flight of stairs. Normally I have zero problem with stairs, but if I am carrying a big box that hides my feet from my view then I am suddenly unable to use the stairs! I don’t know where this came from. I got stuck in the tube recently with a heavy big box with the prospect of taking a few more connections home, and after googling ahead to see if the stations had disabled ramp or lift access, I saw there was none so I gave up and took a cab. There is no physical reason why I cannot go up and down stairs if my feet are concealed from view, yet for some reason, I find it really difficult!

Vertigo seems to present itself as a physiological sensation that is caused directly by my experience of space itself, and I can either read it as something which is there to warn me or dissuade me from going further (if this is part of my primitive fight-or-flight response to mistakenly perceived danger), or it can be read something which excites me by being physically challenging. I think I prefer the latter reading, unless I get stuck in one place for too long and end up requiring rescuing, like a cat stuck on a tree. 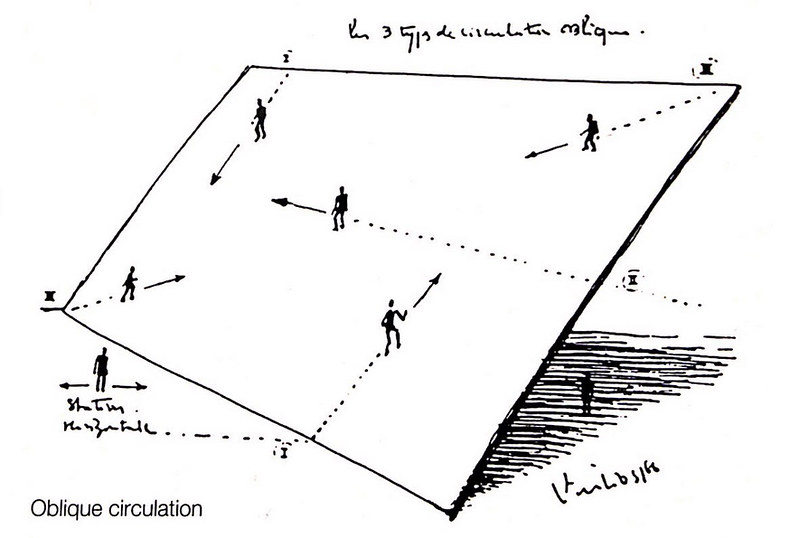 For me, it reminds us that the surface that we stand upon doesn’t have to be a calm, generic flat plane which is there to reassure us of the rationality and stability of the world we live in. Perversely, I suppose that maybe the idea of installing a ridiculous handrail is a bit like that…