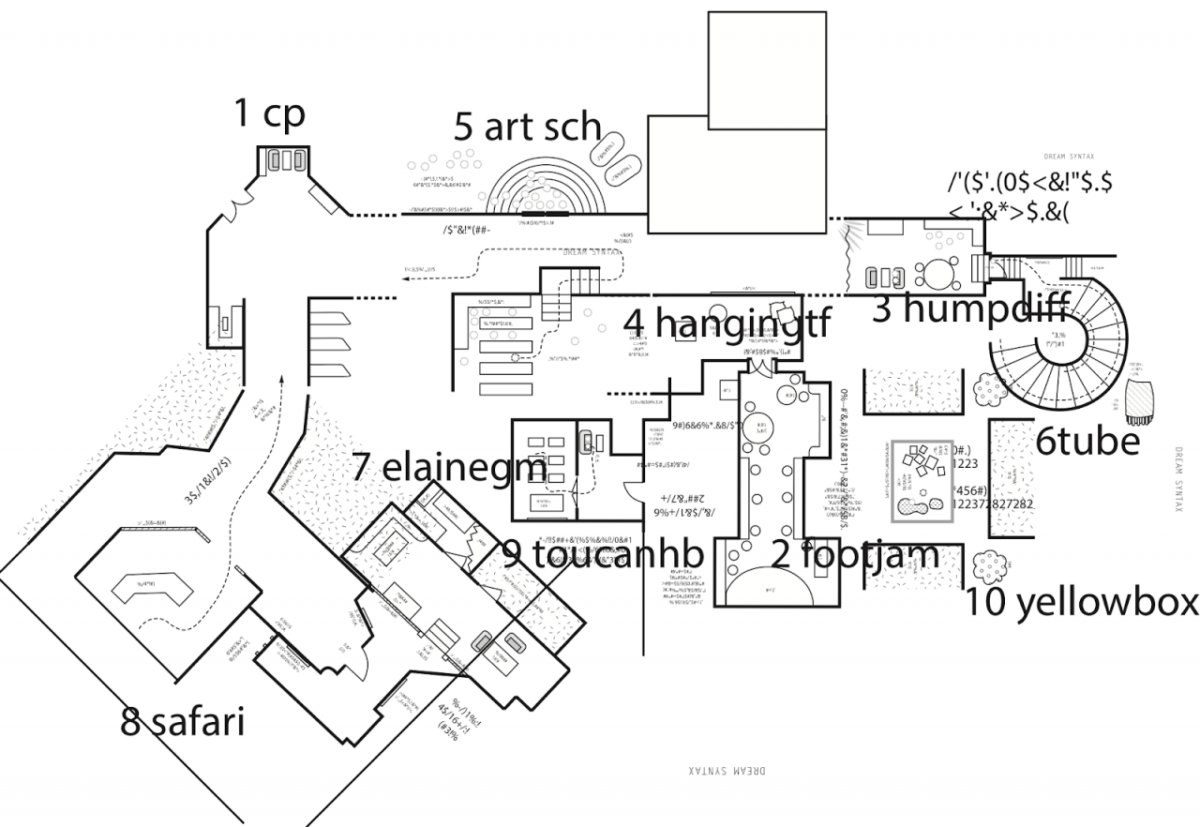 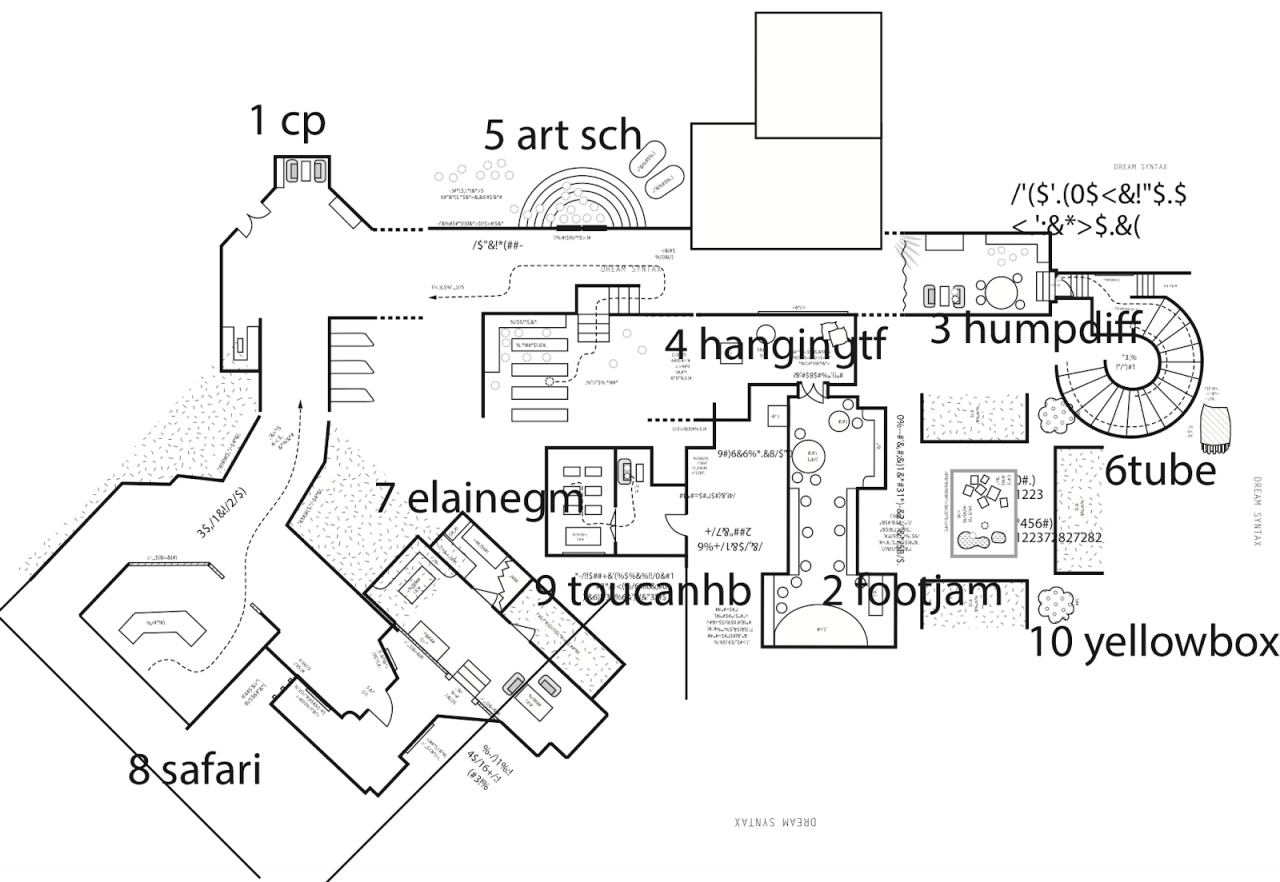 Back in January I spent about 2 weeks working on a VR interpretation of the material from my old project Dream Syntax. Dream Syntax was a project in which I tried to map out all the dreams I had in map form. Those of you who know me when I first started doing it will also know that I had also wanted to map it all out in 3D but this was simply too time consuming. So I made a selection of 10 of my dreams from 10 years ago to visualise in 3D, and then stitched them up together so that one could walk through them one by one – in VR. 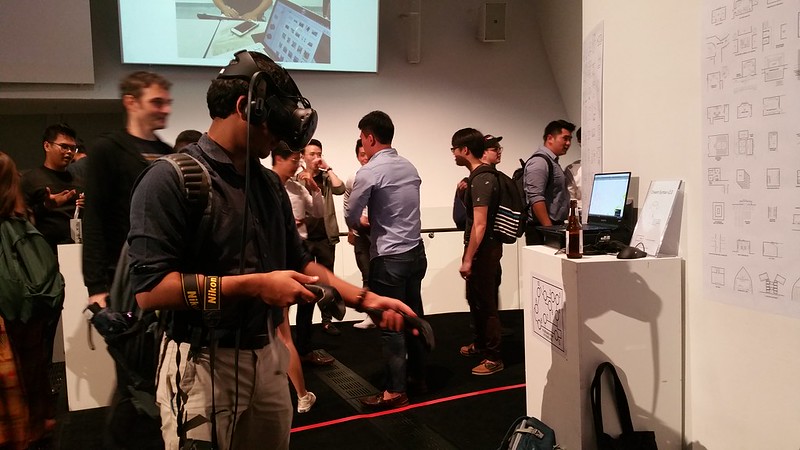 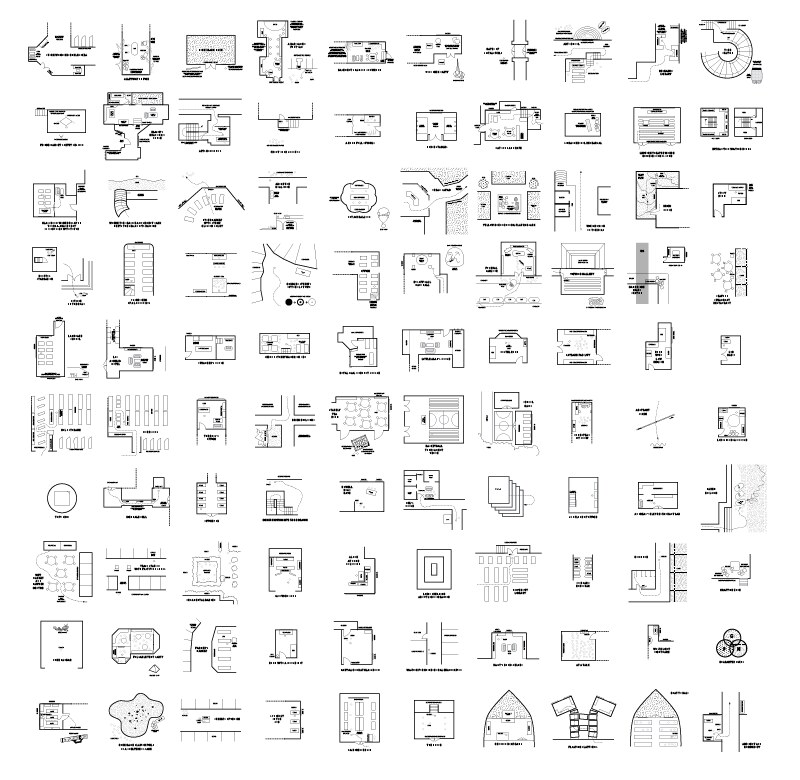 On the wall: “100 Dreams”
I originally meant to spend much longer building the project, but I was still adapting to teaching full-time alongside my artistic practice at that point, so in reality when I look back on the madness that was this project, I realise that I only really spent 2 weekends developing this project. I slapped it together in Unity with VRTK because it was just the fastest to work with – although it does seem that VRTK has since reached its end of life.

Here is a list of some things I discovered whilst developing the project:

STAIRS AND SLOPES IN VR 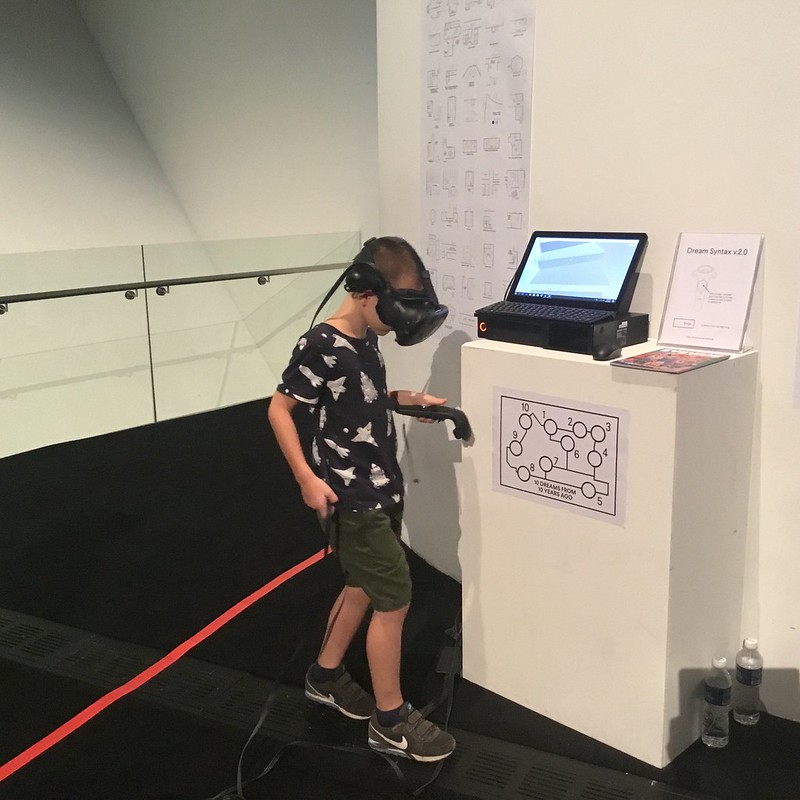 Stairs. People really do have great difficulty with stairs in VR. Your position is partly determined by the location of your head, therefore if you stand on the edge of a step and lean your head out over it, you will involuntarily ascend or descent to that new step without even having to move the rest of your body. A BUCKET OF SIMSICKNESS FOR ALL! At this point, I don’t know how to get around this besides making it a third person experience rather than first person experience. 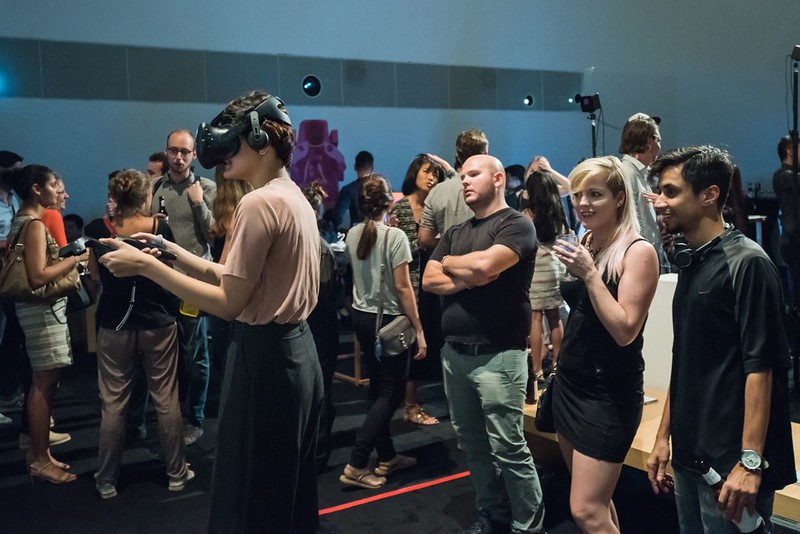 Too many people may block the lighthouses or if the room uses false/raised hollow flooring, footfall may shake the lighthouses and stop the vive from working entirely. The user experience is also really strange – you come into a room full of people wearing headsets – tell me what kind of weird dystopia of technological escapism is this?

The idea of a VR exhibition with several VR works sounds nice, but logistically it presents many new challenges. If you put several lighthouse setups in close proximity there will be intermittent tracking interference (ie: controller or headset position jumps around) and grey-outs (ie: headset loses sight of the lighthouse and compositor goes grey). I learnt this the hard way on opening day, where it became clear that my installation was repeatedly getting tracking interference from the lighthouses of the tiltbrush demo right next to me. One solution would be to NOT PUT THESE INSTALLATIONS SO CLOSE TO EACH OTHER in the first place. But if that is not possible, these following sketches should be self explanatory about how to solve the interference issue. 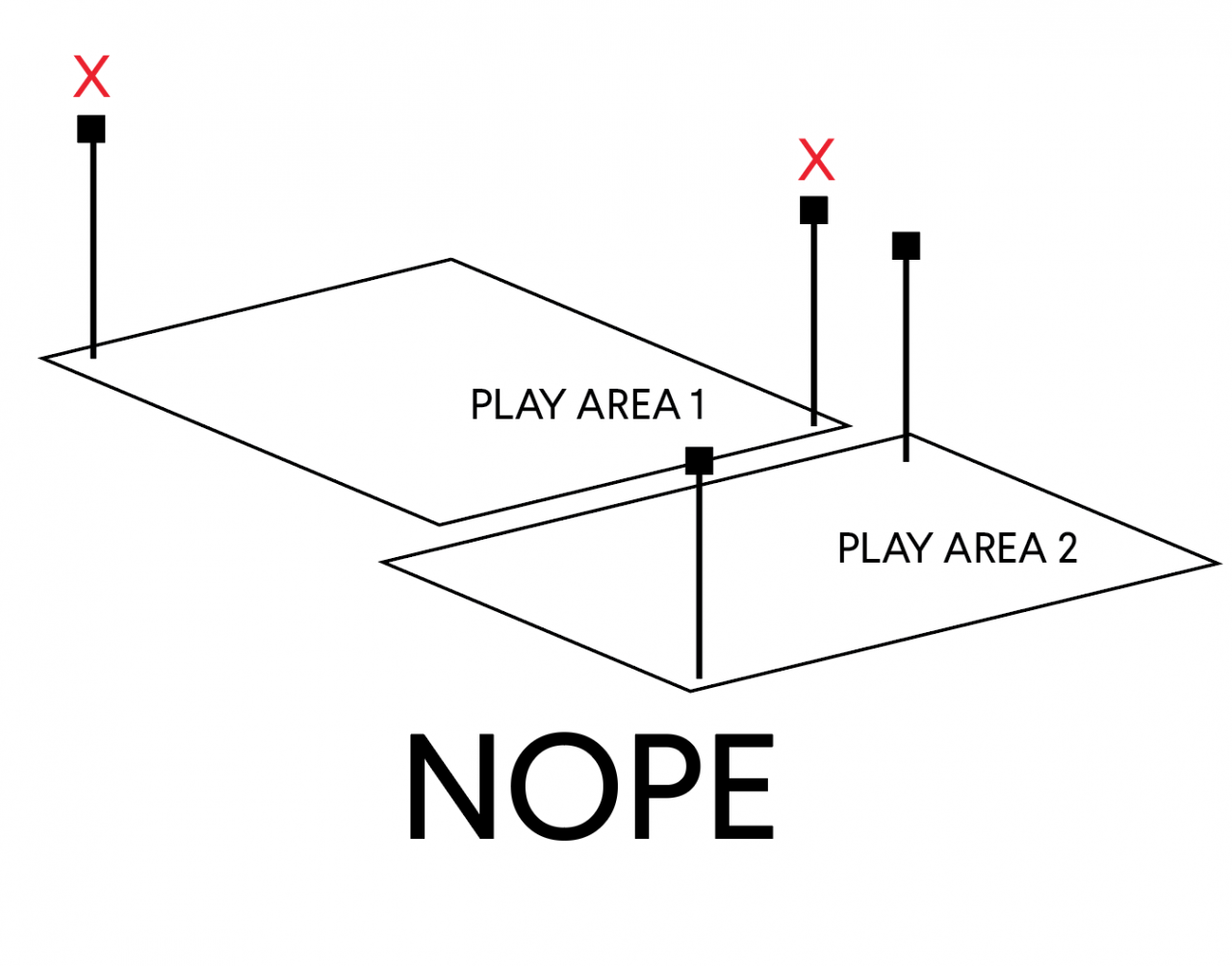 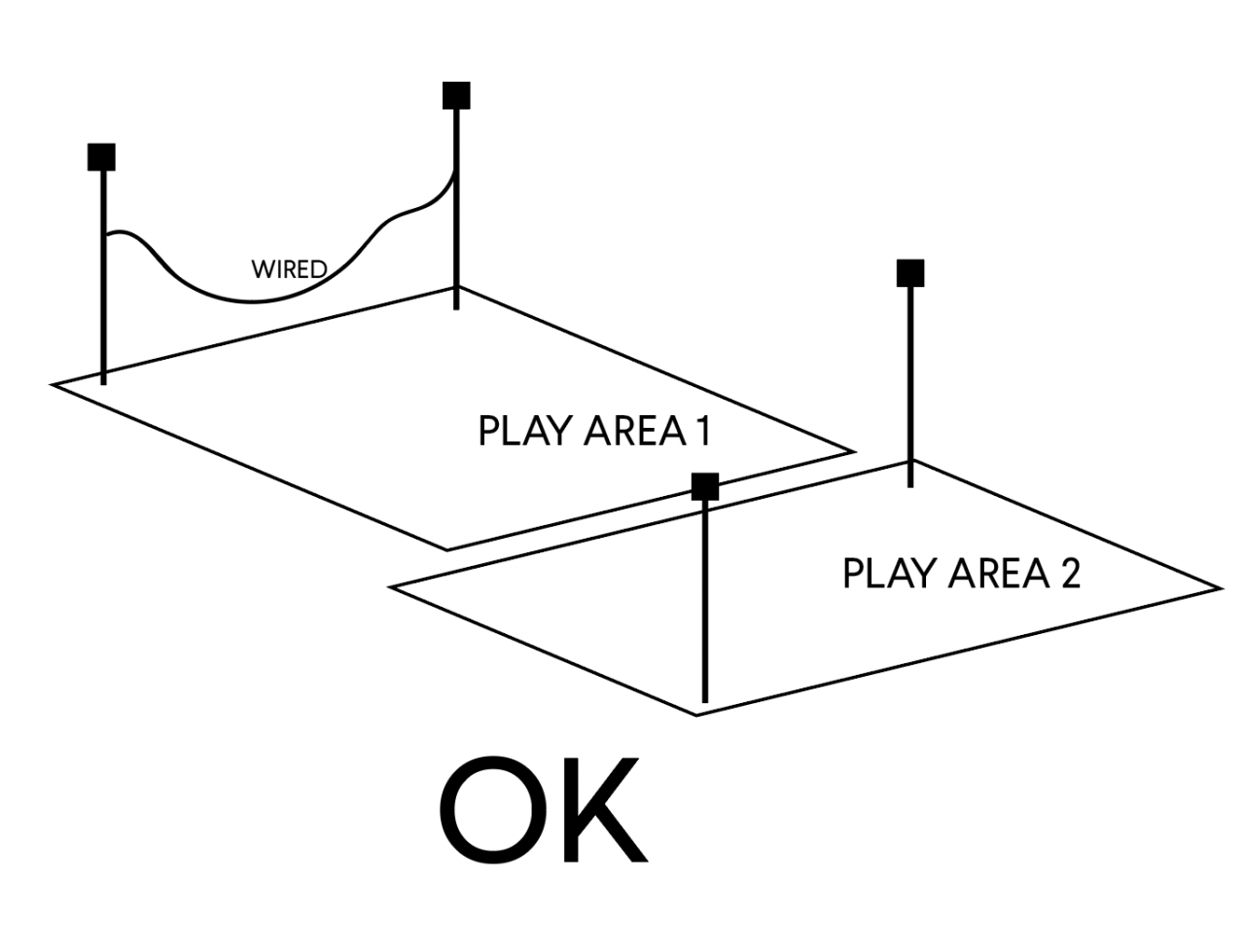 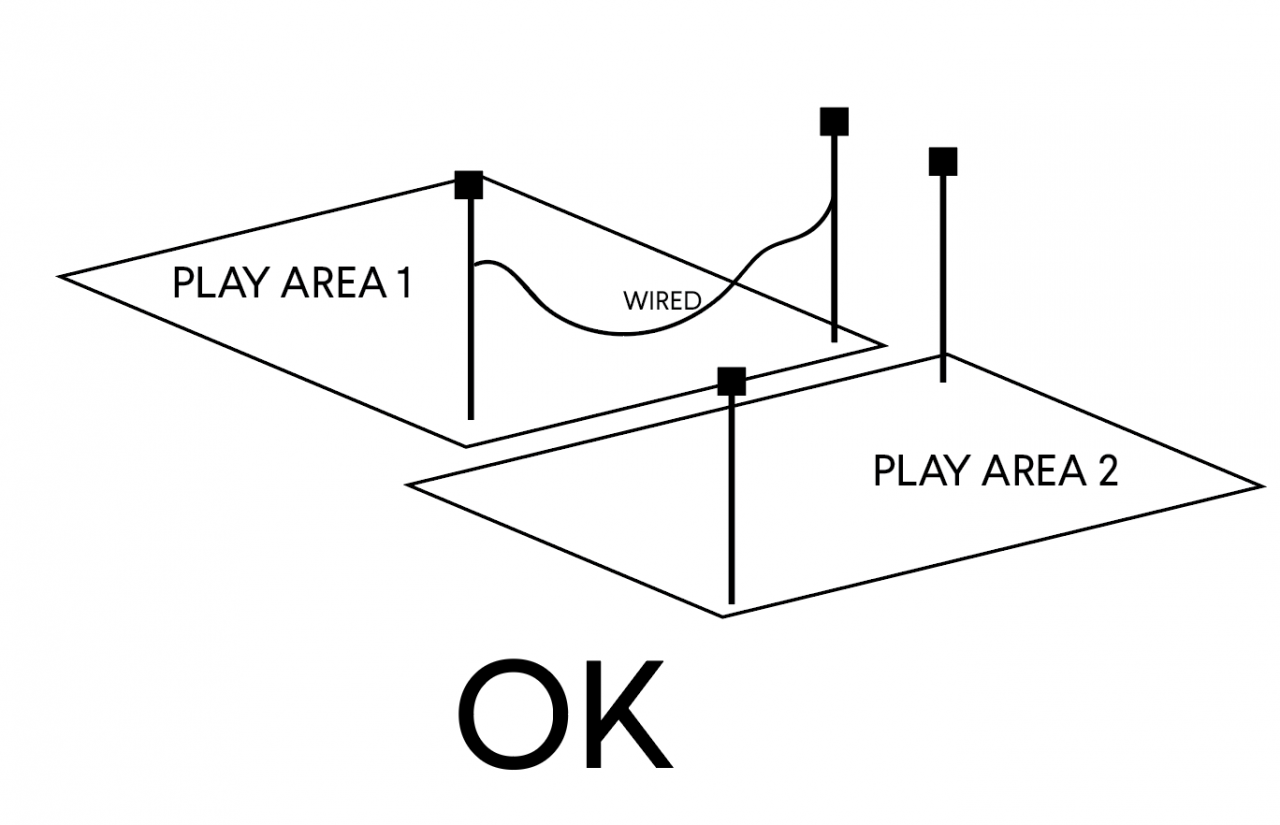 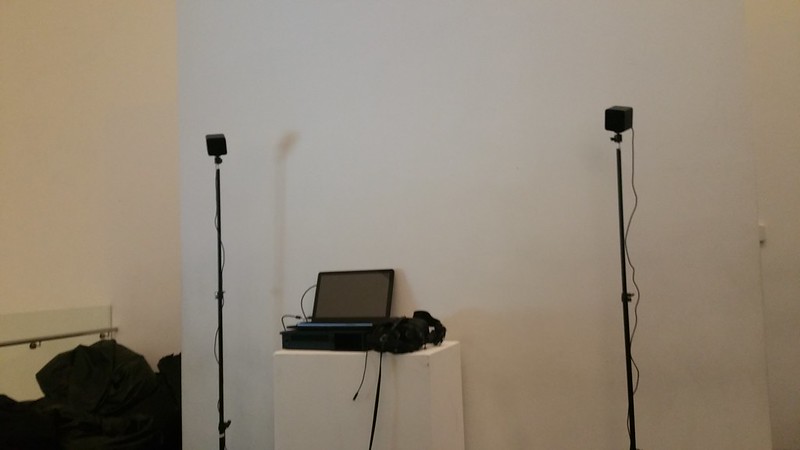 Wired connection and position of lighthouses
Technically speaking the lighthouses are “dumb” and just need to be correctly PAIRED with the headset when you set things up. That means you could actually have TWO headsets using the same lighthouses. The only issue with having two headsets with two different games in the same play area is all the hitting and accidents that would happen from two people with headsets and controllers wildly flailing in each other’s direction.

VR MAY CAUSE FACIAL PAIN FOR SPECTACLE WEARERS 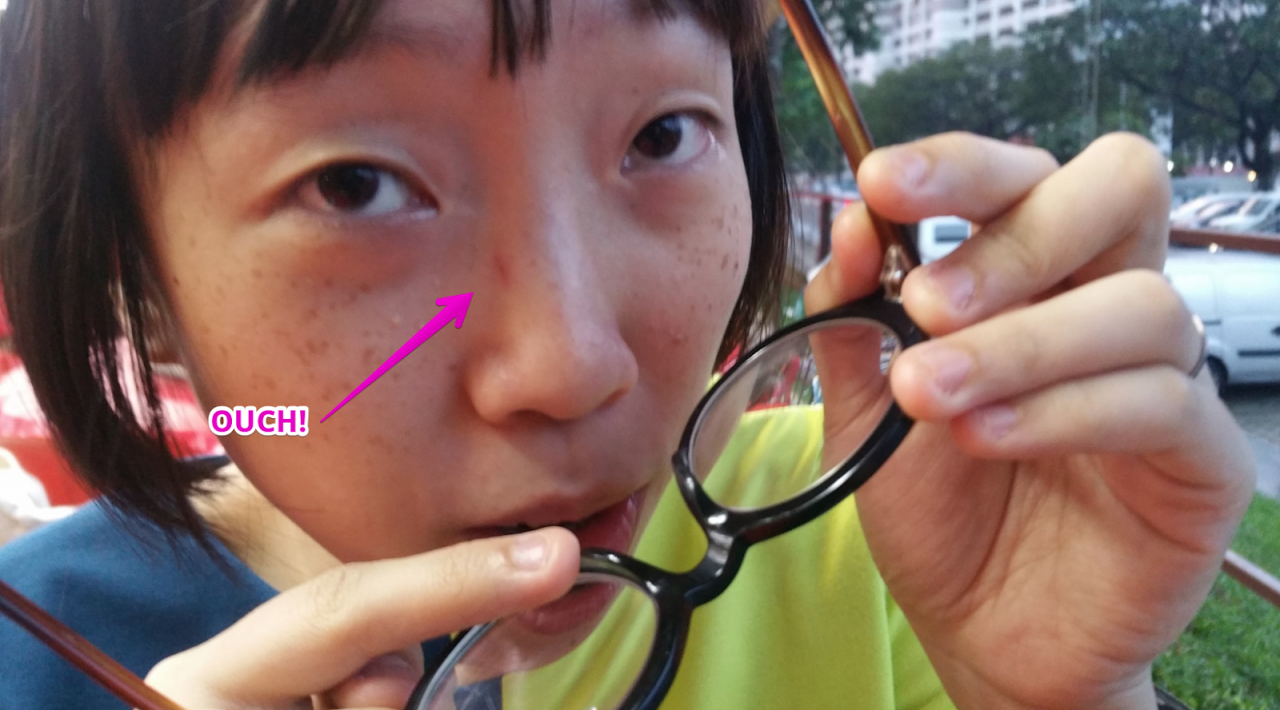 Both the Oculus and Vive don’t seem designed with the spectacle wearer in mind. My glasses are big and wide (all the better to see you with!) but with such a large frame which also had to be crammed inside the space of the headset, the load of the headset began to hurt my nose after a short while. The solution I found was to take off my glasses, position them deep INSIDE the headset, and then don both glasses and headset at the same time. Otherwise, you will find yourself squeezing your glasses hard into your face when putting on the headset, causing this kind of injury to your face.

As a medium for telling stories or producing work, VR headsets are just so expensive that most users haven’t had much experience with them. The result is that people coming to see your interactive may get more excited about other accidental features you introduce rather than the work you originally meant to make using the platform. For example, I had a error/glitch in my app where at one particular position on the map you ran the small risk of leaning your head over the parapet and falling off the spiral staircase (damn you, stairs!!!) into the infinite galaxy skybox. Now, some users discovered this error, and when this happened a volunteer on site would help you restart your experience.

But no, as it turned out, some people really got big on “falling into the galaxy” and after discovering they could do this, they just kept on doing it over and over again – although that was not the point of this work…

Other works from the show 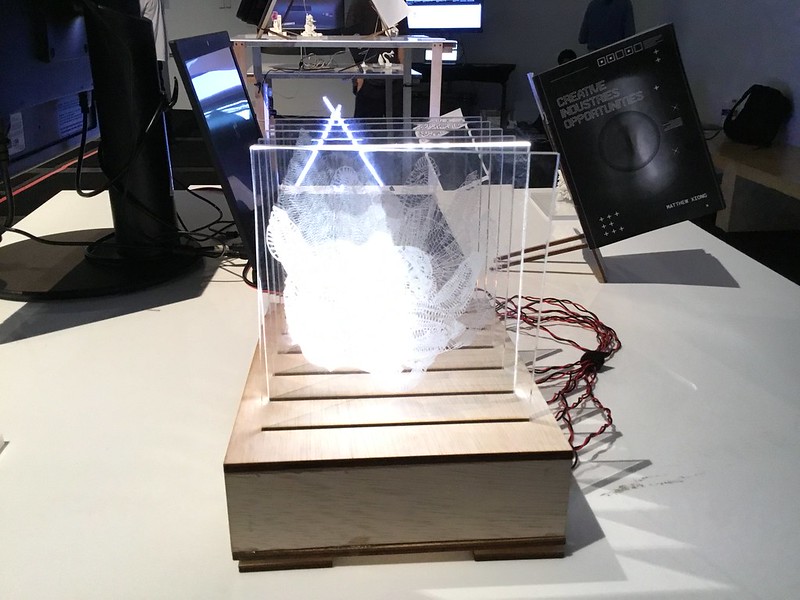 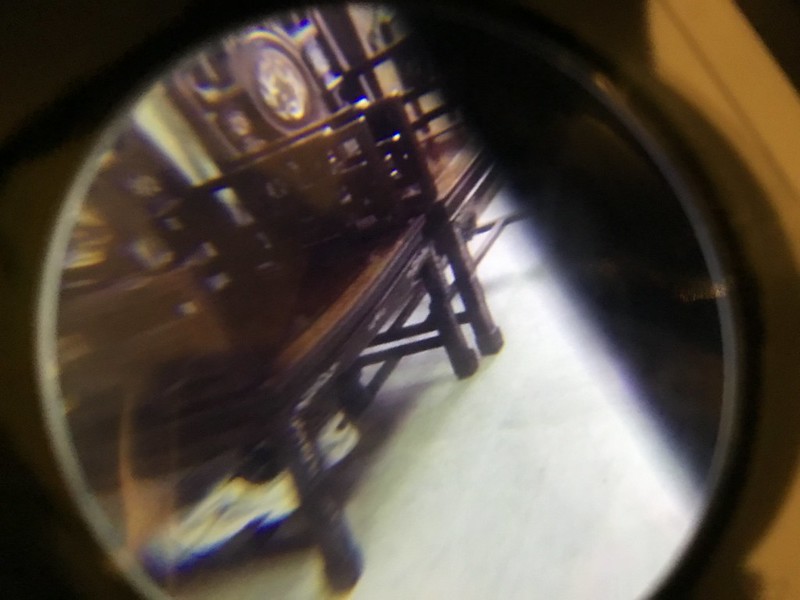 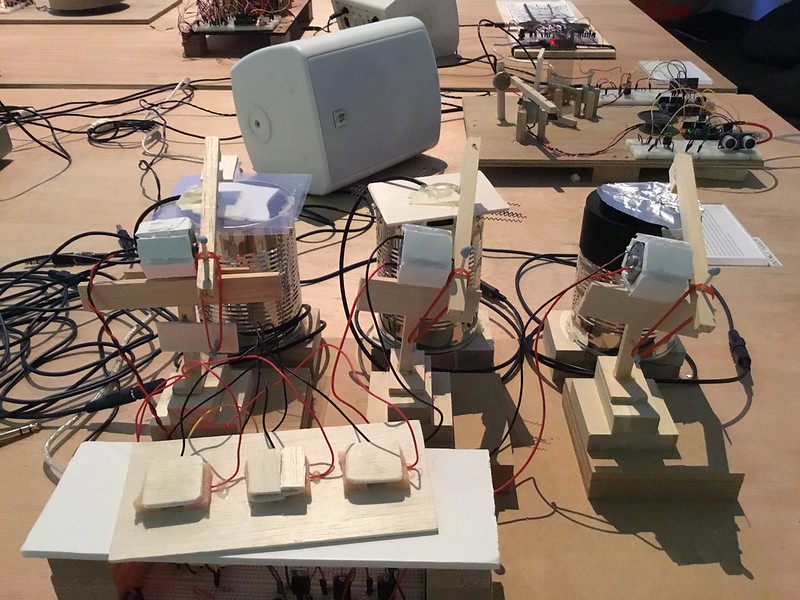 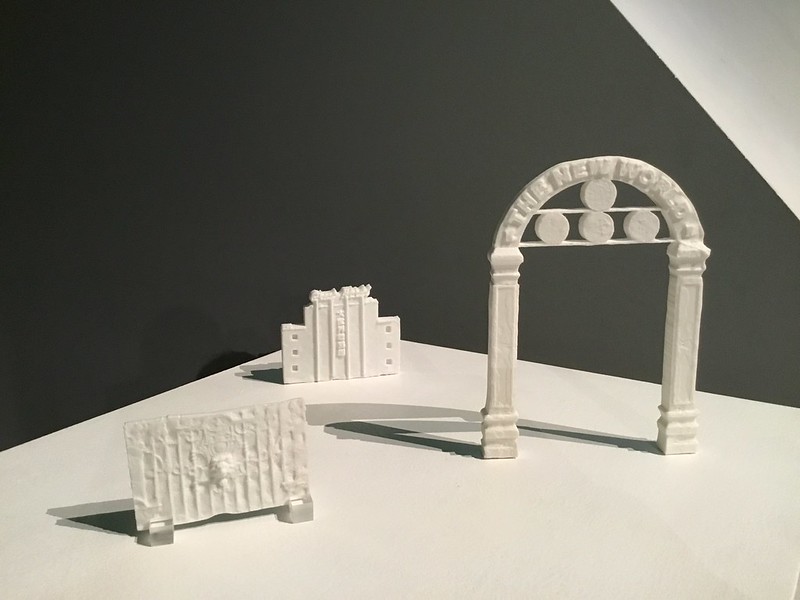 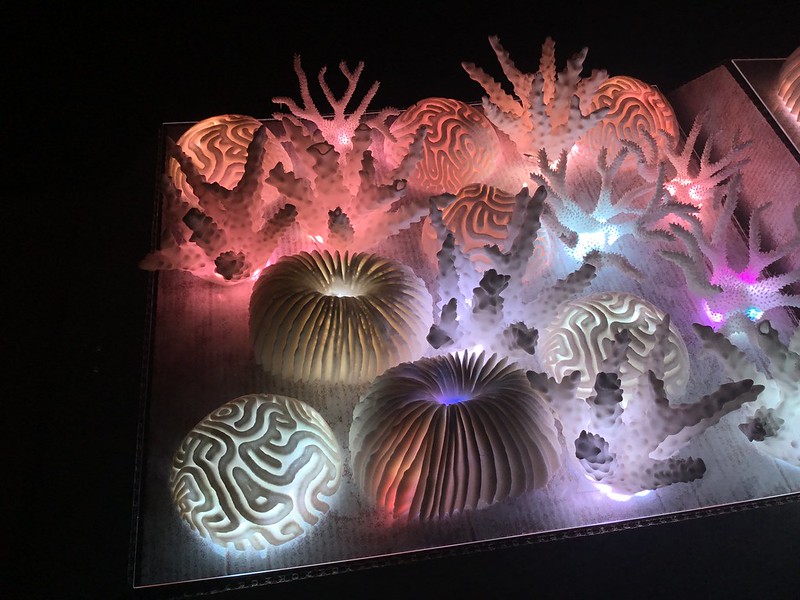 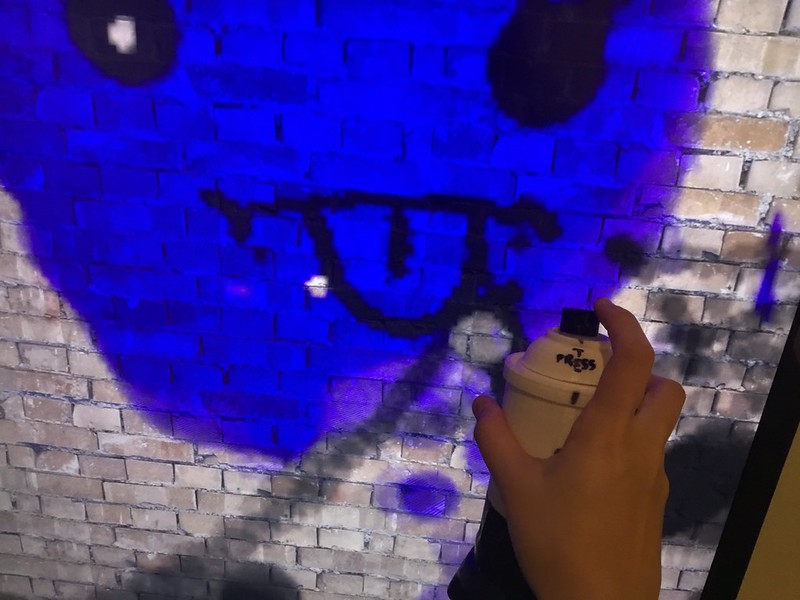 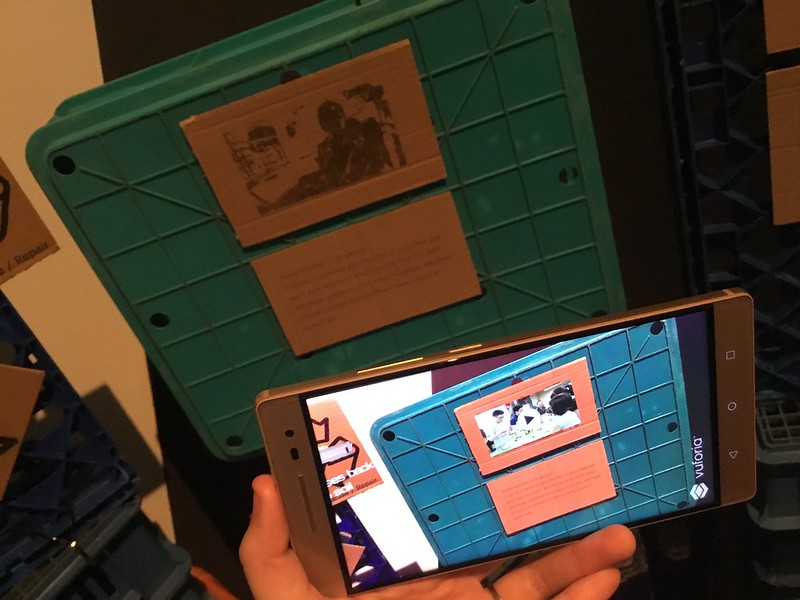 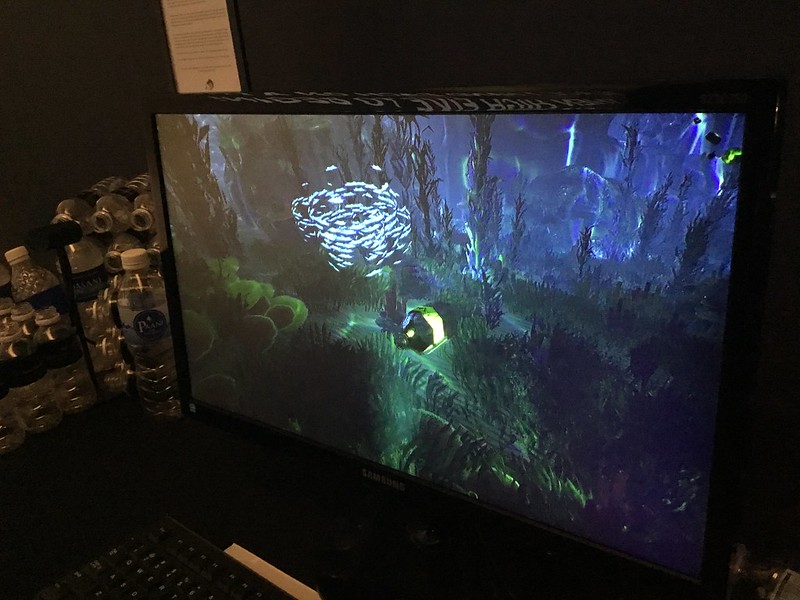 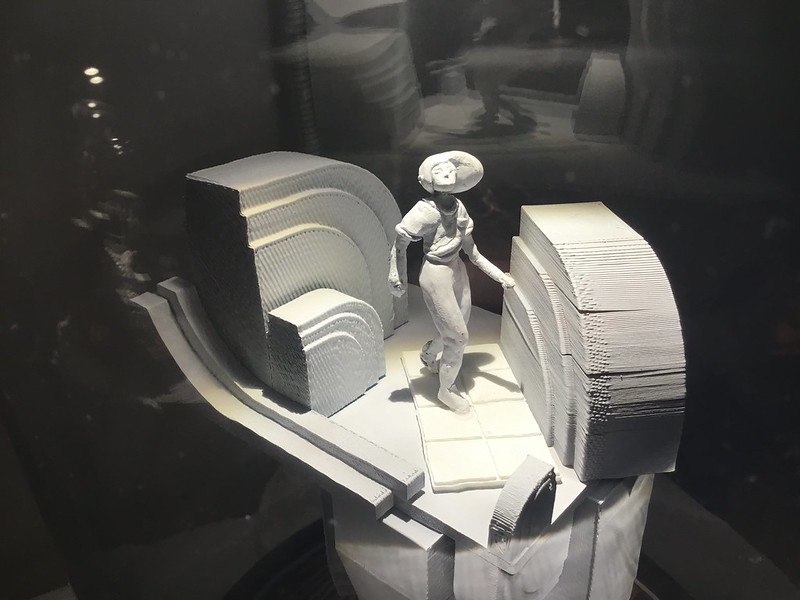 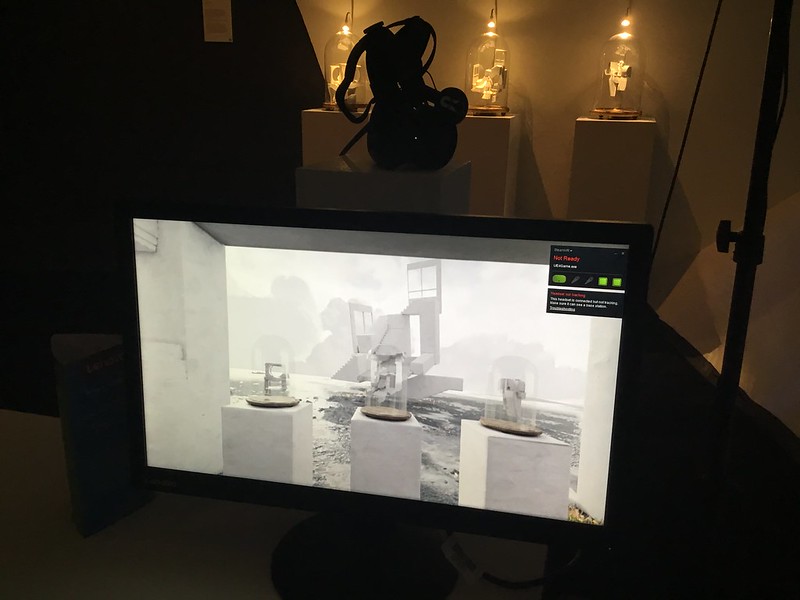 With thanks to Meshminds for organising the show and making it all possible.