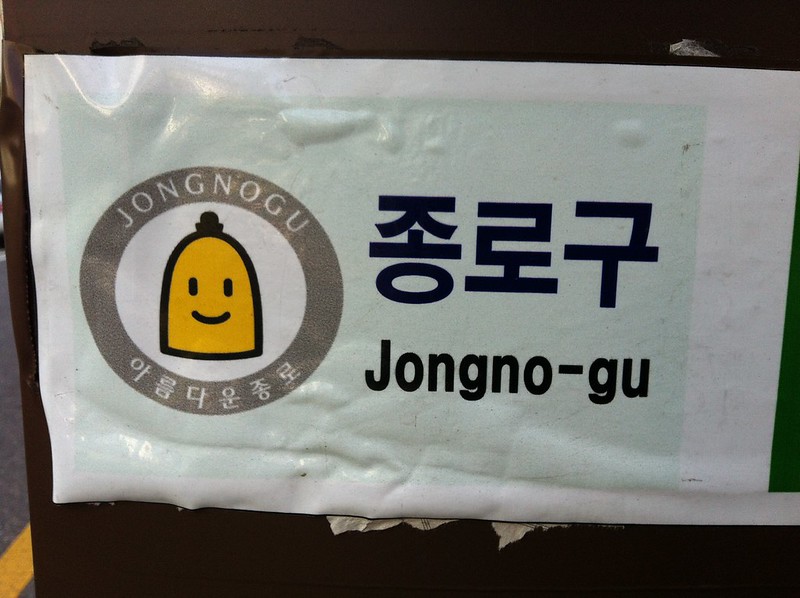 We visited the Seoul Museum of History the other day. It is located next to the Gyeonghuigung Palace and opposite the Heungguk Life Insurance building (replete with the “Hammering man” sculpture). The big Gyeongbokgun Palace and Deoksugung Palace (덬수쿵) are also in walking distance from this point.

The museum is in an area known as Jongno-gu. You might see this cute little bell logo all around the district because jongno means bell street; it is also where the Joseon dynasty established its capital city. (I must say it is funny but it is more like “jong lo gu” actually, oh but the vagaries of hangeul!) 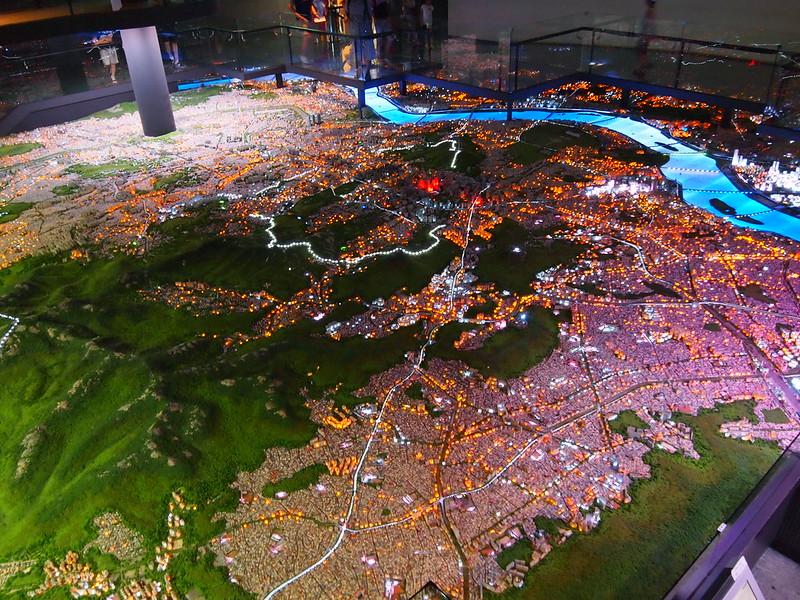 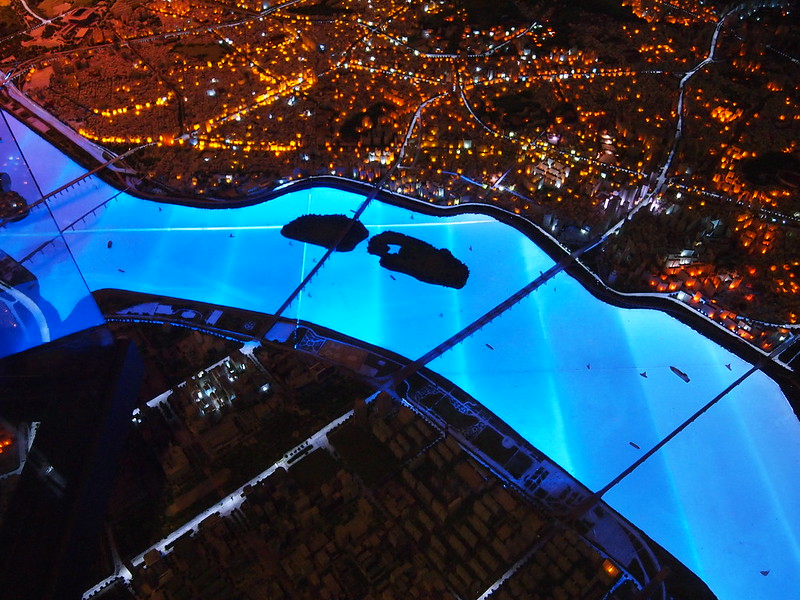 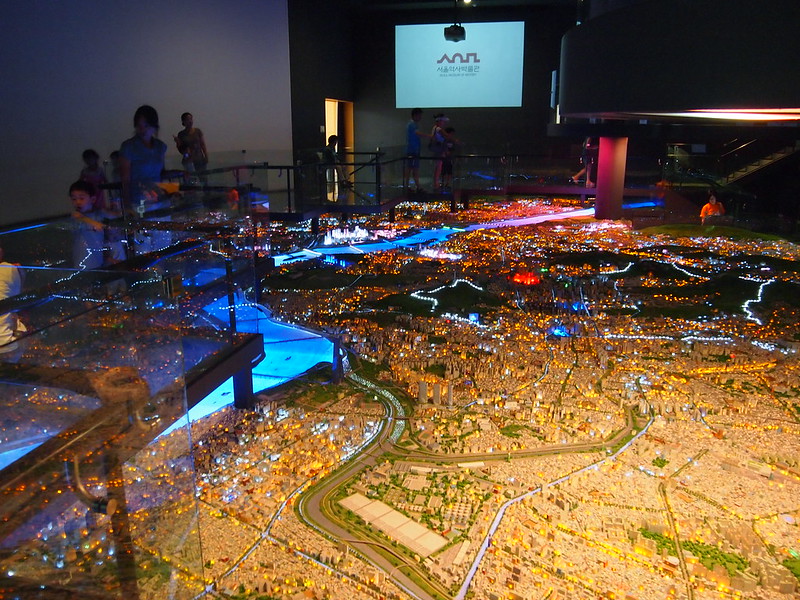 The model was built to be illuminated from within, with over 200000 LED bulbs, lights, and projectors to illuminate specific regions depending on what building or feature you selected on the multimedia kiosks. Unfortunately, at the point I was there, the kiosks were constantly hogged by sugar-laden children who were smacking their sticky faces on the screen randomly with wild abandon, it being summer holidays and hot outside and all. The city model is scalled to 1/1500 which is very viewable and apparently shows 605.25 sq km of Seoul to visitors, who can walk over parts of the model on a transparent glass bridge over the model. 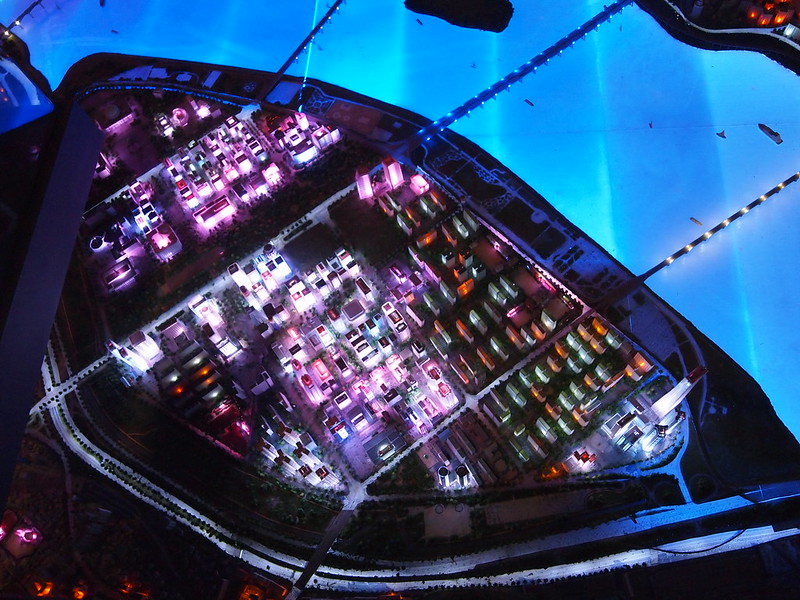 For me one of the useful landmarks is Yeouido (여의도) as it is the closest geographical feature on the Hangang from where I am at Mullae. Yeoui island is incidentally the main business and investment banking district in Seoul (aka Wall Street/Stock Exchange equivalent in Korea), and I walked to Yeouido the other day from Mullae. Notably, reading more about Yeouido, it appears it is an island that is commonly used in the media to refer to the size of other cities – “it is the size of ten Yeouidos!” Anyway, this is Yeouido in the model.

The first two zones in this history museum talk broadly about the Seoul’s early history in the form of the capital Hanyang, its fortress fortifications, and various everyday life in Seoul including models and various cultural artifacts. 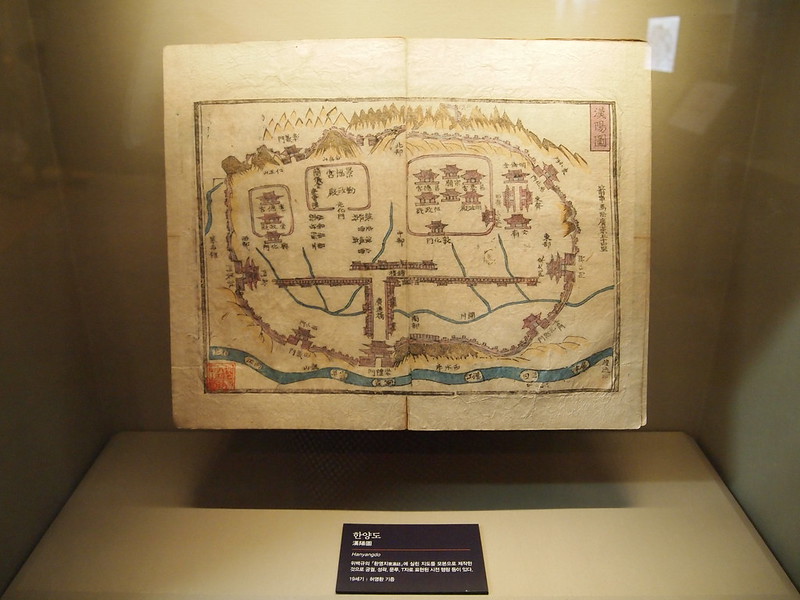 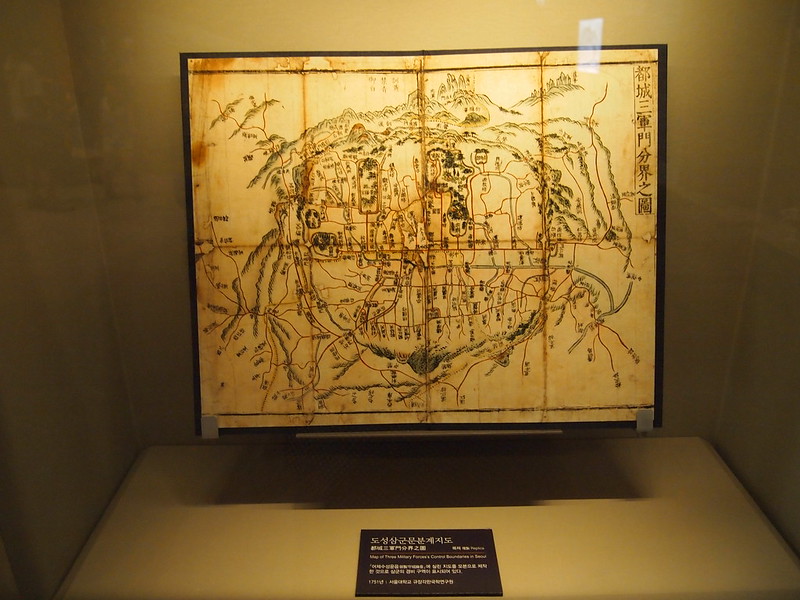 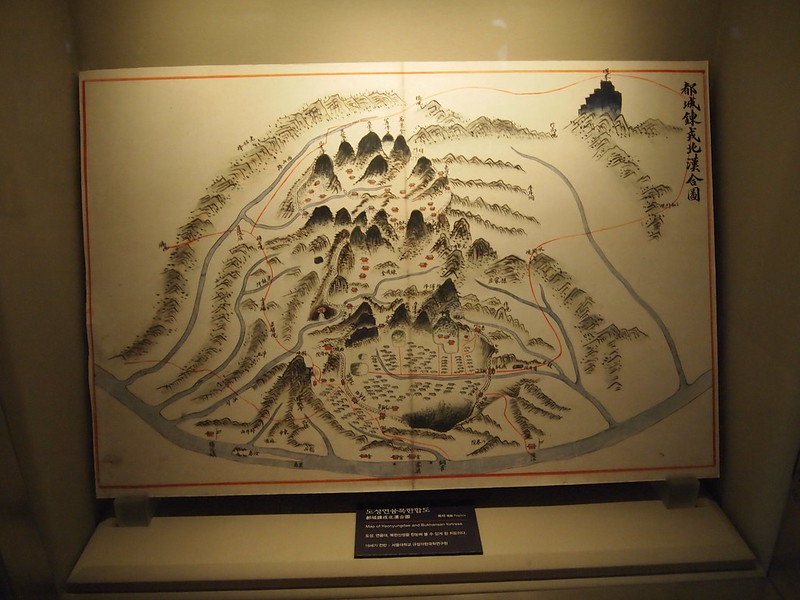 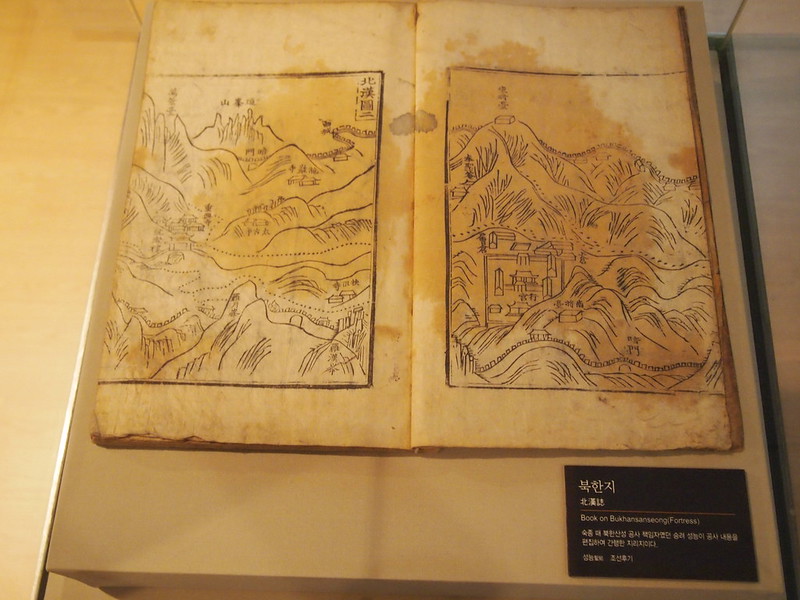 Book on Bukhansanseong Fortress (북한산성 / fortress of the mountains north of the Han)
While googling for the word Bukhansanseong, I discovered that it is known as a Registered Cultural Asset (Tangible). So the question then follows, is there a list of intangible assets then?

Lo and behold, there is a list known as the “‪Important Intangible Cultural Properties of Korea‬” (Jungyo Muhyeong Munhwajae / 중요무형문화재). Items include dances, songs, cloth weaving techniques, games, crafts, and other rites. 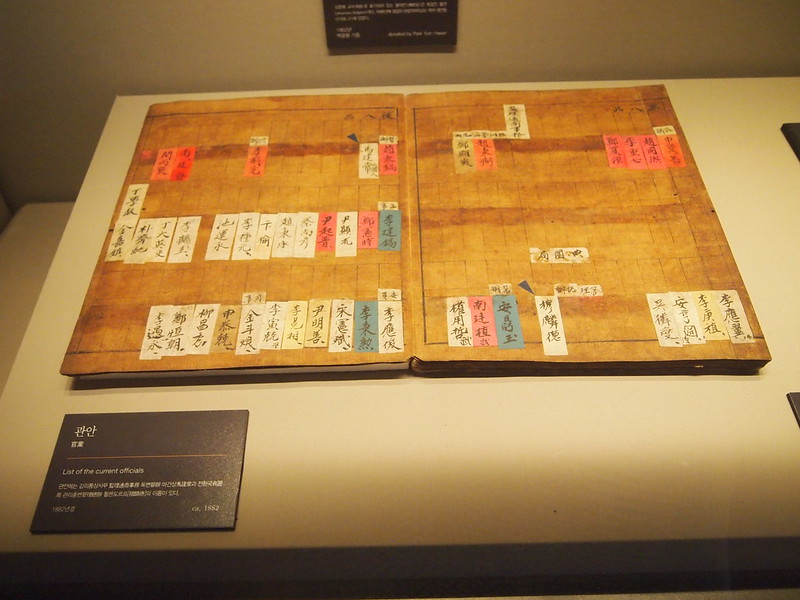 List of current officials
Korean history has no lack of documentation, something that we seem to see in all the museums we go to. Each moment in time is accompanied by prodigious amounts of text and it is indeed a very literate society with copious studies and books. The example above shows the sticker tabs of paper stuck onto a book. It has been mentioned that Korean maps also use tabs and stickers to add additional information to a map. 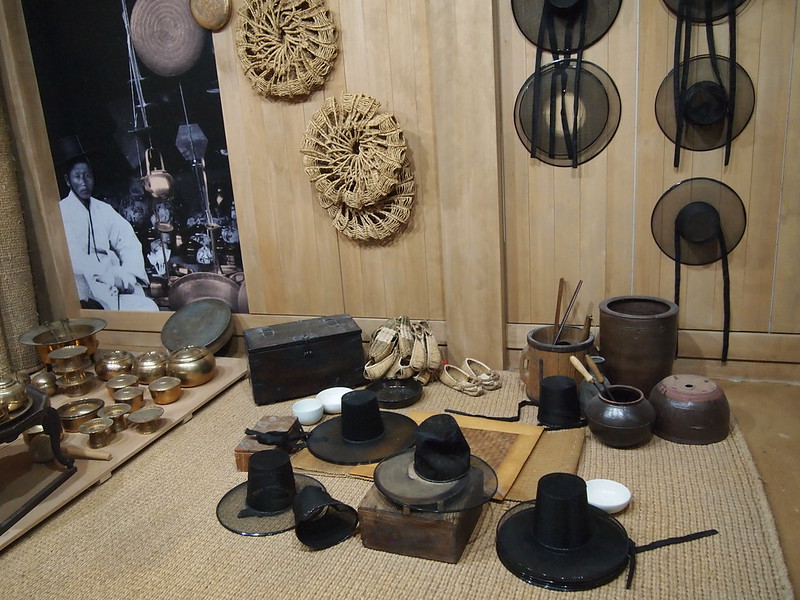 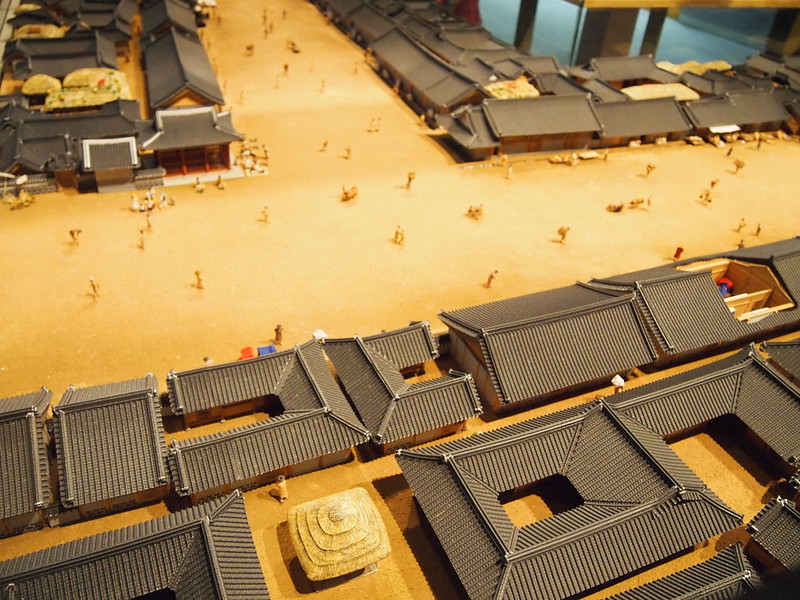 Diorama. Those streets sure are wide! 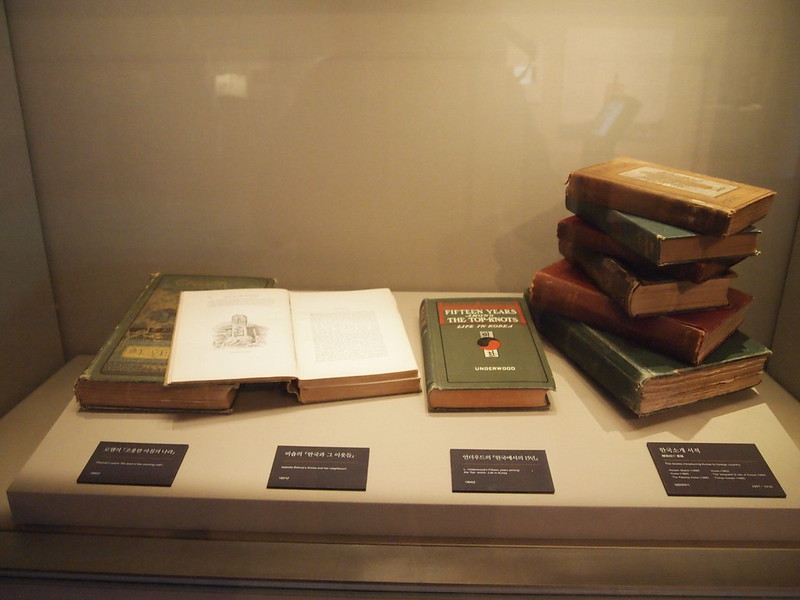 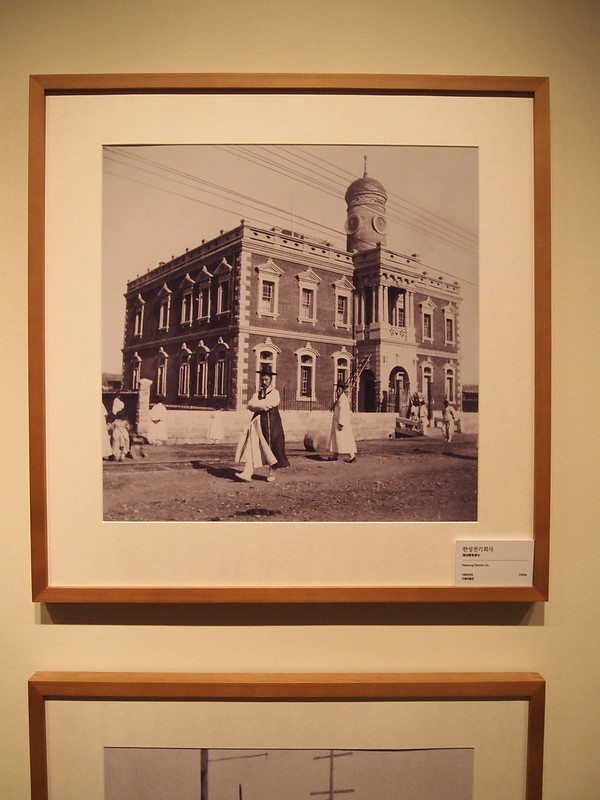 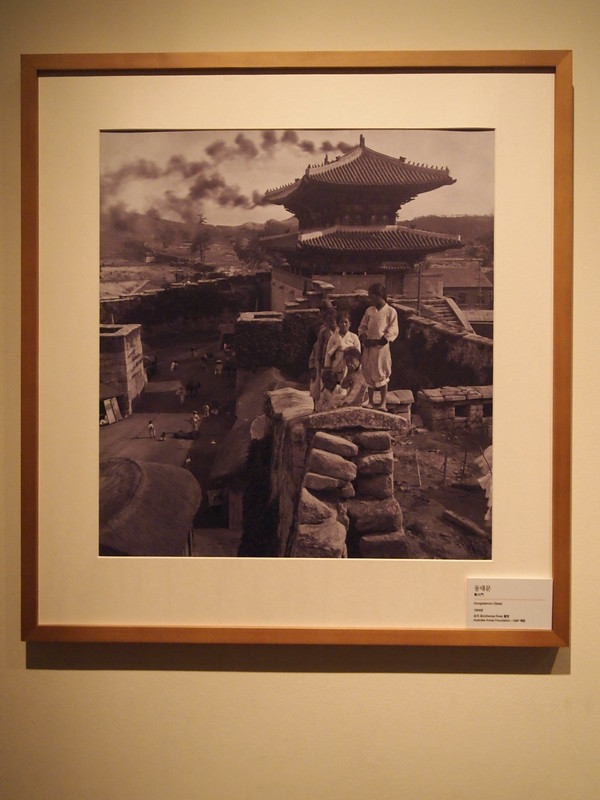 Children standing on top of Dongdaemun 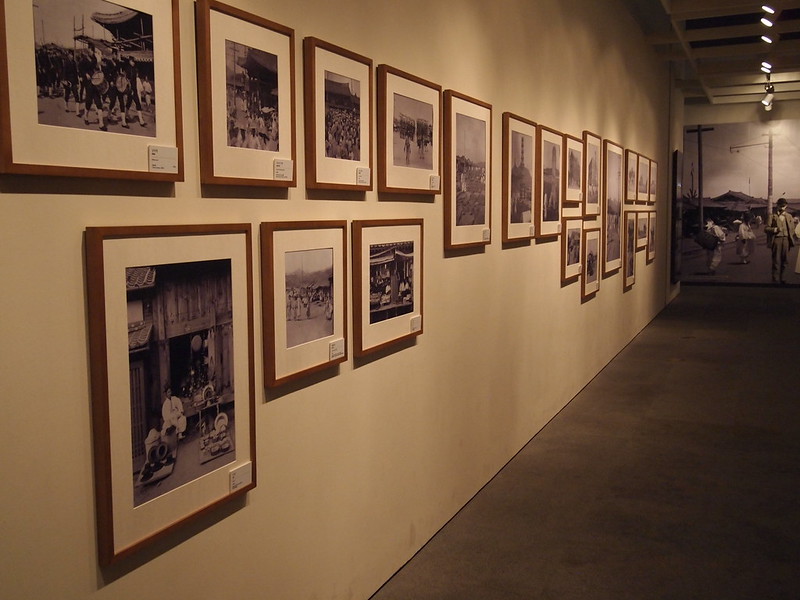 This portion is illustrated by many dioramas depicting life under the Japanese Occupation, and residual effect of japanese and western influences on the capital city and lifestyles in Seoul. 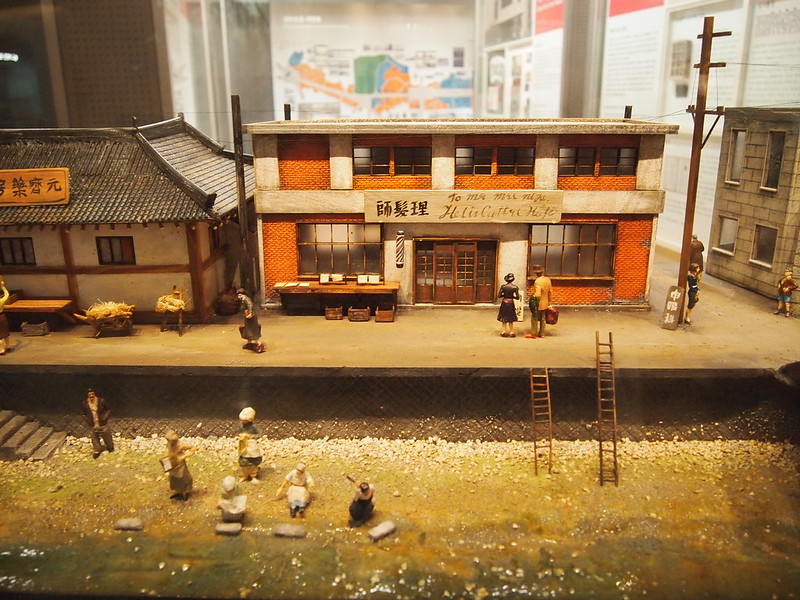 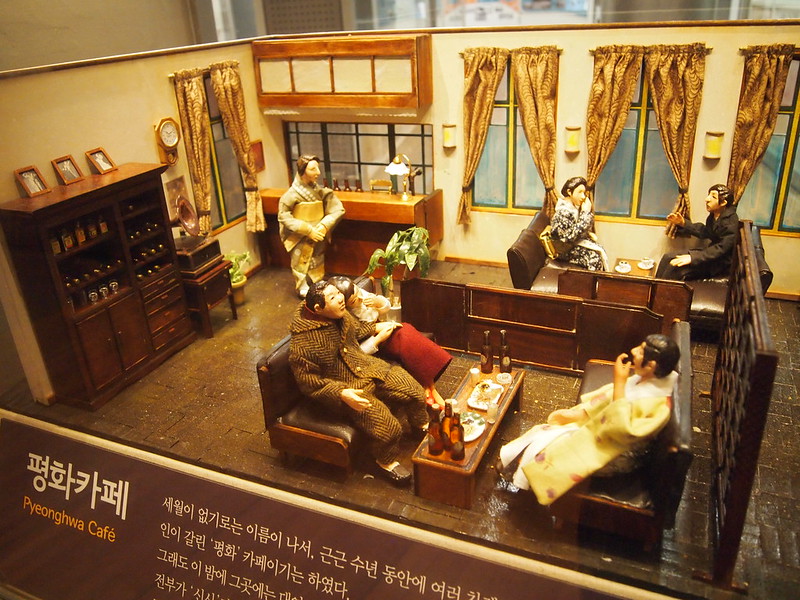 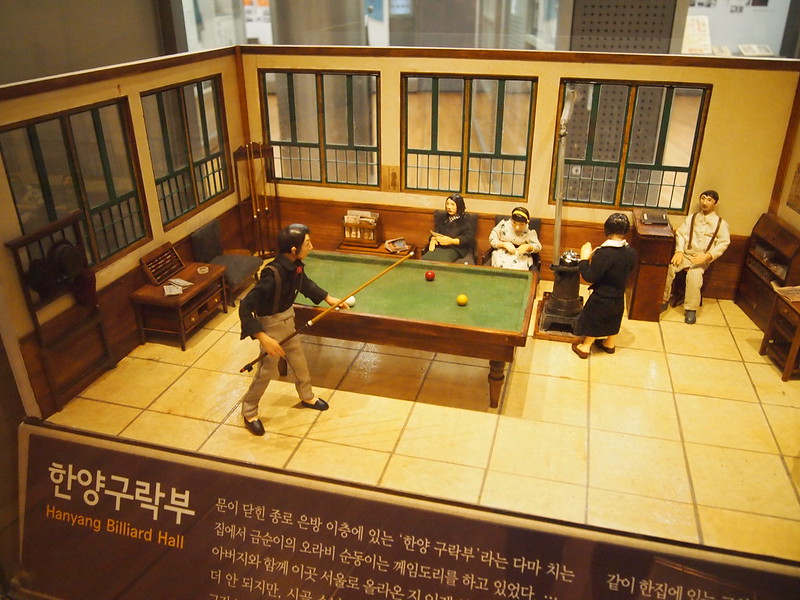 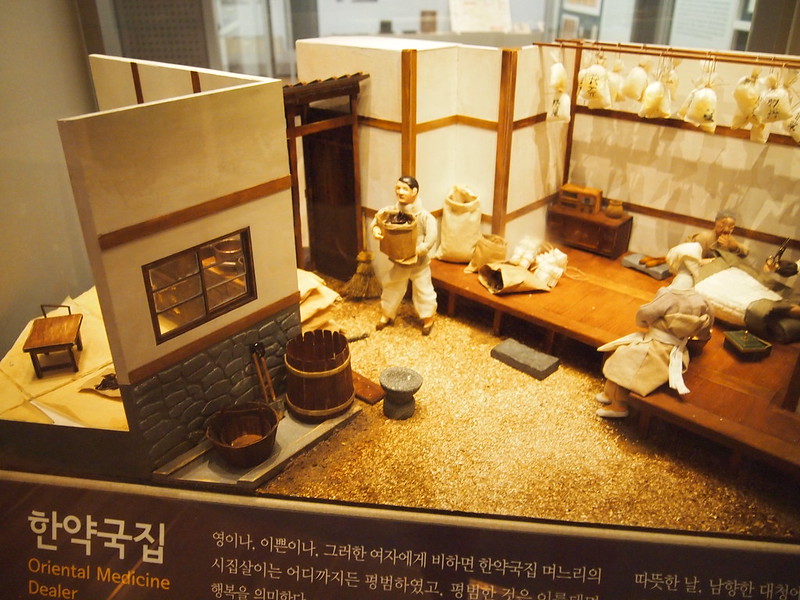 Oriental Medicine Dealer
Department Stores: There is much to be said of the japanese influence and western influence over Korea. In the 1920s there were japanese merchants who began opening department stores in Gyeongdong with big shop windows showing the goods that catered to different social classes in Seoul. The stores with their shop windows were a showcase of modernity as well as the symbol of urban consumerism itself. Other investors from Korea also opened stores along Jongno.

Dabang/Cafes: Coffee represented the taste of modernity in Korea. Writers and other patrons would go to the dabang (tearoom) to get access to coffee, tobacco, beer, and the telephone. The first cafes were also opened in Bukchon (also in the Jongno area)

Literature/Writing: The population was very literate and Korean literature flourished with numerous publishers in the area, although social criticism was banned. Insights on the life of people could be found in the comics in newspapers which lampooned the ups and downs of the fashions of urban citizens.

This part of the exhibition was mostly text and pictures explaining how Seoul managed to push for so much urban development from 1953 (after the cease-fire between south and north) and the “strong will to live, high educational aspirations, and a liberal lifestyle formed a strong foundation by which the people of Seoul overcame the ruination of war to kick start a brilliant period of growth that would occur in a remarkably short time”…. 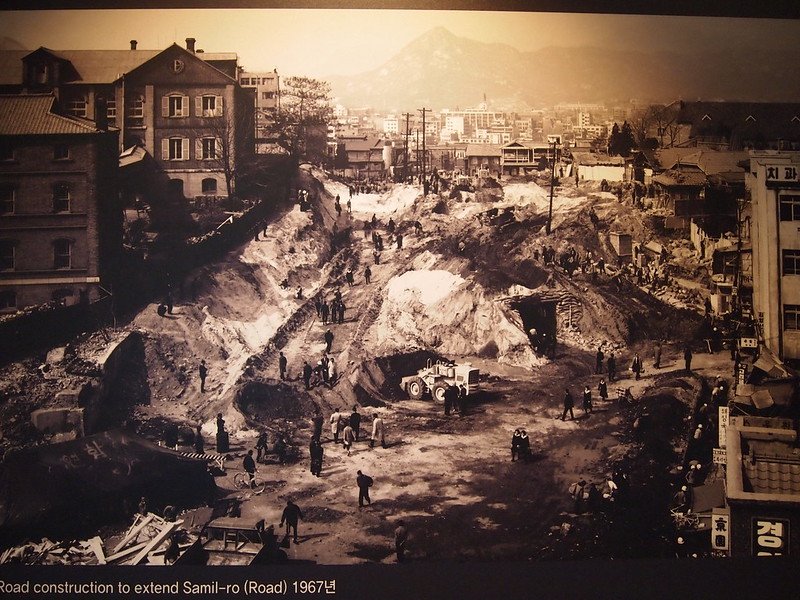 Road Construction to extend Samil-ro in 1967

“Yeouido is one of the most obvious testaments to the growth of Seoul following the nation’s liberation. Though an airport had been built during Japanese colonial rule, Yeouido was mostly composed of sand and mud until the mid 1960s. As earnest development was initiated in 1967, Bamseom, one of the peaks of the islet at the time, disappeared and 6.6 million m sq of sandy land was turned into an artificial islet with a size of 2.87 million m sq. A huge square in the heart of the islet, the national Assembly building and Sibeom Apartment Complexes, significantly altered the shape of the islet. Since 1976, when it became home to major broadcasting companies, the Korea Stock Exchange Building, business centers, and the headquarters of major companies, Yeouido has come to the fore as the “Manhattan of Seoul” 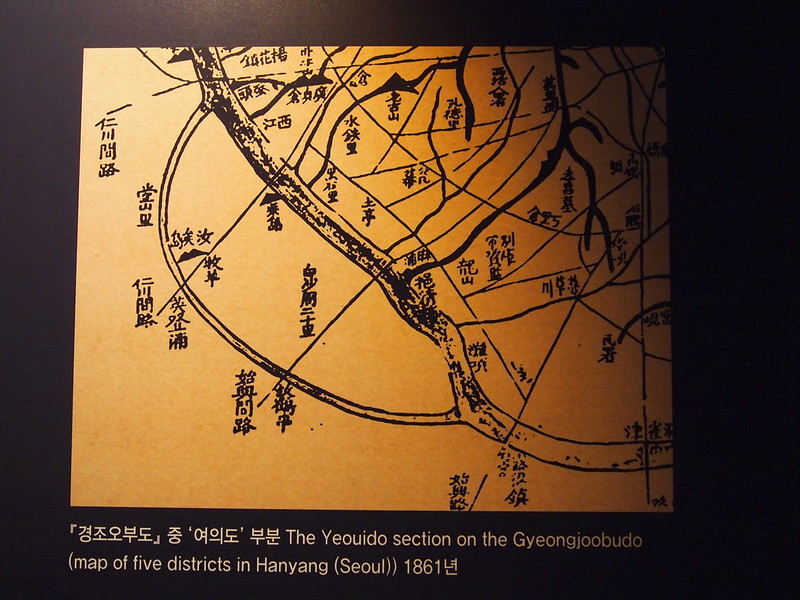 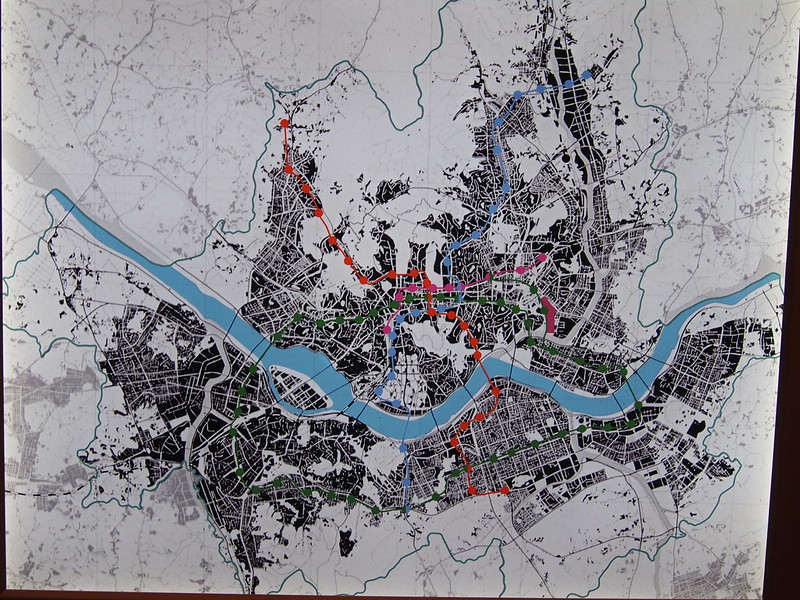 “In the 1970s, the focus in Seoul was squarely on economic growth while the political situation remained chaotic. Income levels continued to rise as the economy advance… but the number of urban poor also increased and the population in the capital area exploded. At the end of the 1960s, the Seoul Metropolitan Government had begun looking for a suitable location for development in order to ease the overcrowding. It decided on the area south of the Hangang (River Gangnam) which was at that time quiet countryside. The construction of the Seoul-Busan Expressway and the 3rd Hanganggyo Bridge added impetus to the Gangnam development effort and the government enacted various policies to promote development in Gangnam while curbing development north of the Hangang. As a result, the area south of the Hangang emerged as a new “land of opportunity” for many Seoul residents.” 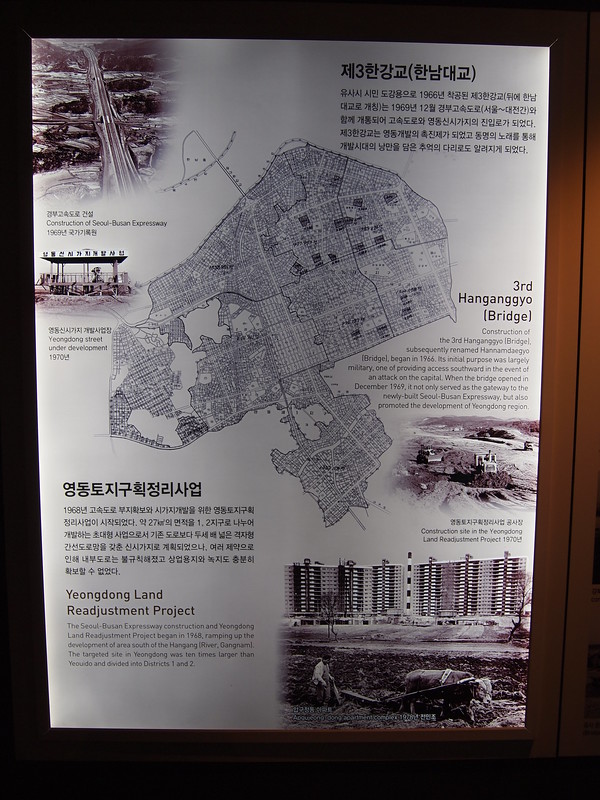 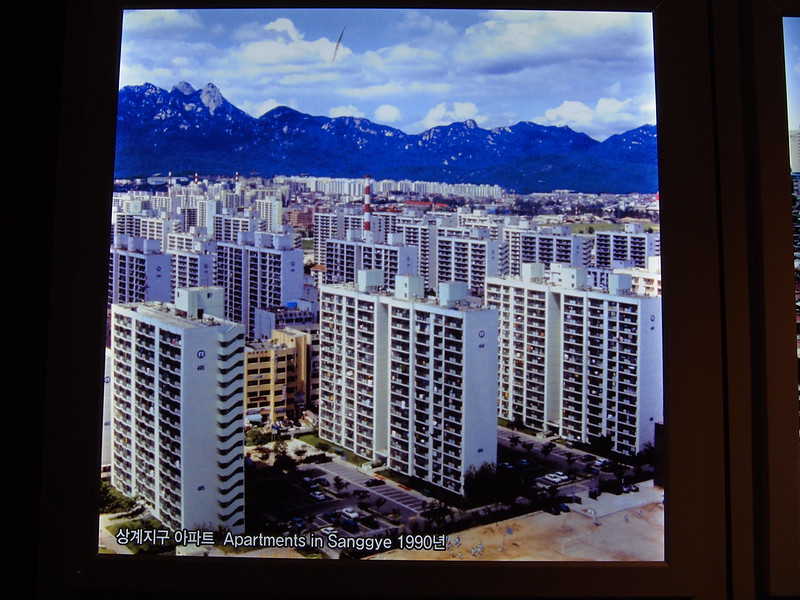 Not sure if I like the final picture because it shows a shiny, successful urbanization project, or because its too perfectly straight and anonymous that it also somehow appears uncanny. That is perhaps one thing I find different about the flats in Korea. First, the blocks bear very little branding and all look very very similar. Sometimes the entire block looks perfect and pristine, with nary a window open or an item or potted plant hanging out (because they have internalized their balconies inside their houses) – to the extent that when I look at these blocks, I can scarcely believe that anyone lives in there because it looks so clean and uncluttered from the outside. But more on this in another post…

When was the last time you went to the Science Centre? Most people appear to have vivid memories…
Debbie Ding