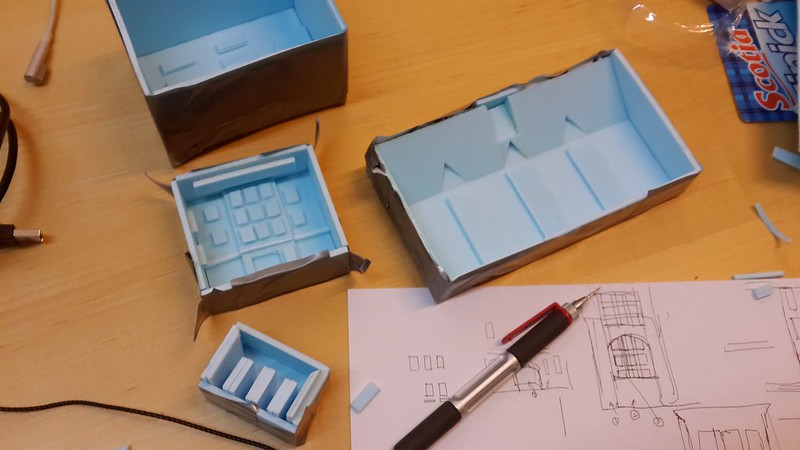 A few days ago I got to ZK/U in Berlin (finally) where I’ll be doing a residency for the next two months. I’m also going to try to catch up on a lot of backlog on documentation and writing here.

On seeing a sink in my studio, I decided it was as good a reason as any to experiment with something horribly messy and wet, like plaster casting. So far I’ve only had one other experience trying to use plaster – earlier in the year I went to a two-day plaster casting workshop by Kevin Callagan at London Sculpture Workshop – it was great because it was more about making quick “sketches” in 3D through hand sculpted clay moulds and plaster casting – instead of drawing sketches, the idea was to produce quick 3d plaster sketches of visual ideas, which I really enjoyed doing – and which I want to do more of for “The Library of Pulau Saigon” project I’m working on.

One of my goals for the year is to improve on my model building skills – sadly I have never ever had to chance to do a proper wood/metal workshop/design & tech class, neither have I ever done a foundation art course, so I am generally very clueless (and completely lost) when it comes to what is the proper way to build something. I mean, I build things because I want to build things, but actually I don’t know what I’m doing really….

I found a bag of ‘baugips’ (building plaster) and ‘modellgips’ (modelling plaster) in the communal material shelf, and I happened to chance across some squishy ‘plaster mixing pots’ for 70 cents in a hardware shop along Turnstrasse, so…

First, I made some moulds to cast the plaster in. I wanted to make some of buildings; the end result turned out to be gross renderings of what I imagine to be ‘berlinesque’ buildings and also the Behala Westhafen building which looms in the distance from my window. I found some blue foam in the communal pile – it is also so easy to work with and make into prototypes! Good thing is that blue foam is a perfect material for plaster casting, and for me it feels less wasteful than using clay, which can quickly become messily inpregnated with shards of plaster, rendering it unusable after a few uses. 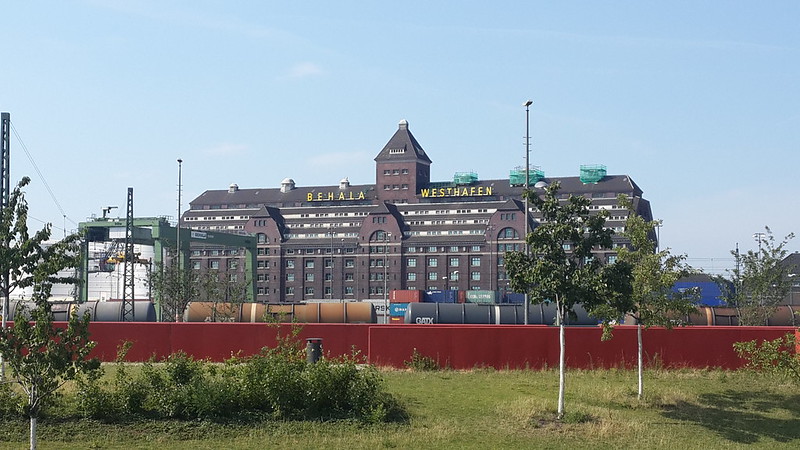 The actual view of Behala Westhafen from the terrace of ZK/U
I wanted to add a note on the Behala Westhafen – it is easy to forget that technically speaking Moabit is an island, bordered by the River Spree, the Westhafen Canal and the Berlin-Spandau Navigation Canal. Looming in front of my window view is the massive, red-bricked Behala Westhafen building, and the trains which come in ever so often, presumably hauling the cargo to be shipped to and from the Westhafen habour. Behala is the company that runs a harbour which ZK/U is right next to here in Moabit, built in 1914, forming Germany’s largest inland port. It is surprising to see the busy port in the middle of the land. You would imagine a sight like this should be at the coast or at the edge of the sea, but here the busy cranes and container port is right in the middle of Berlin! 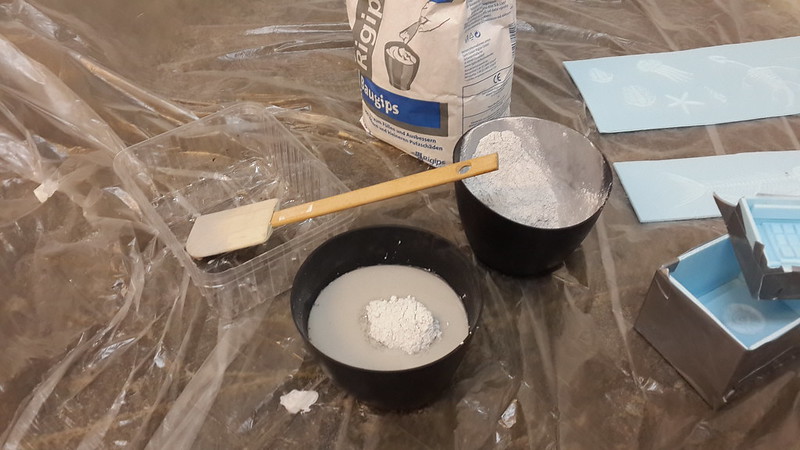 I had half of cup of water in the container and poured in the plaster slowly, allowing the plaster to ‘absorb’ the water. It will make a distinctive sound… if “the sound of water being absorbed” can actually be described as a sound? Well you’ll have to hear it to know it. When the plaster begins to stop sinking and starts forming islands that stick out on the surface of the water, you can start to mix it. I am a lazy person so I got a discount rubber spatula to mix it with instead of my hands. Of course if you are a purist you should use your hands to knead out all the lumps, but without introducing too many bubbles. 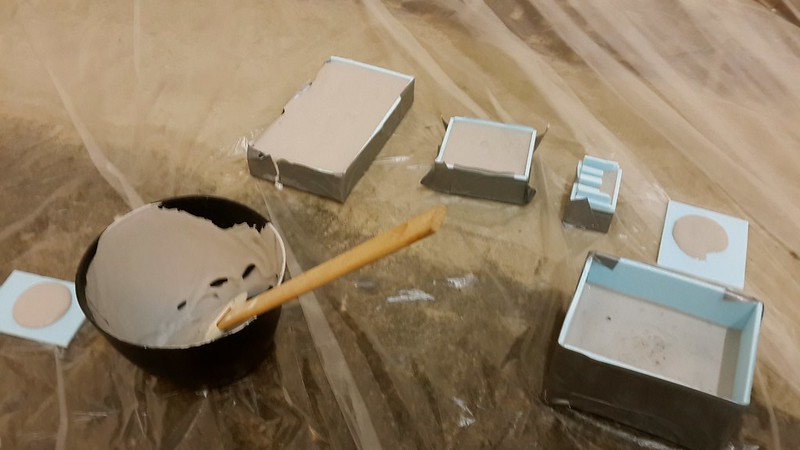 Poured into the casts and left overnight to dry. 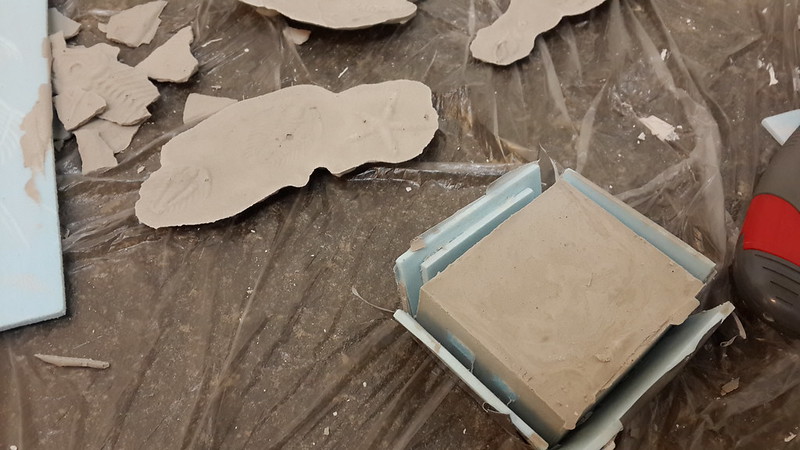 Ready to peel away from the mould 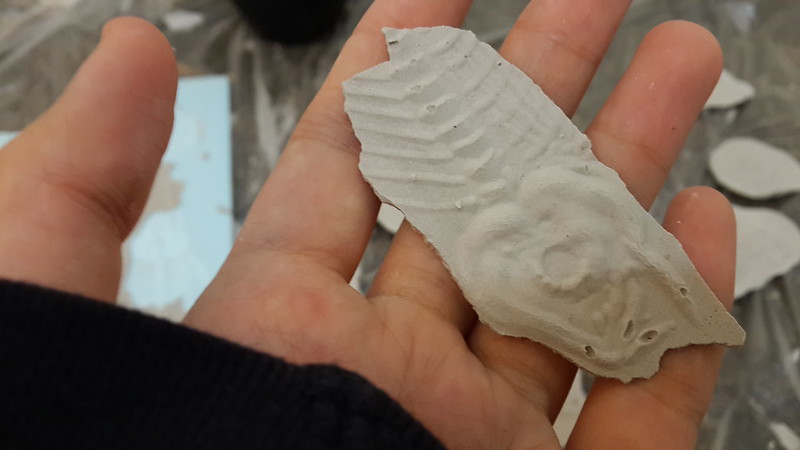 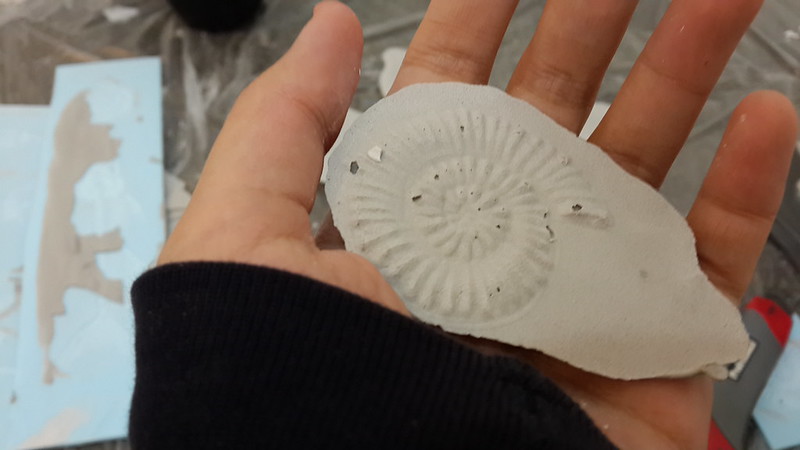 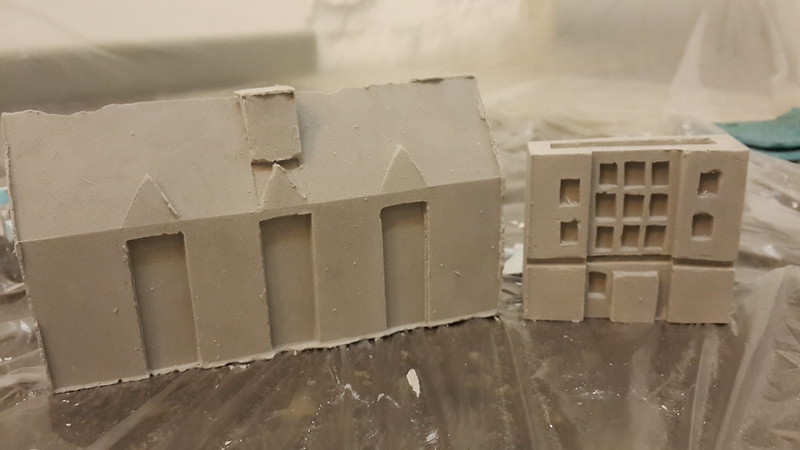 Some manner of a building facade – at this point I’ve realised I’ve done it all inversely by mistake! LET THIS BE A LESSON – is the feature sticking out on the building? To make a mould you should only be cutting out shapes representing each of the recesses, NOT the protuberances on the building! The next time I make a mould of Behala Westhafen I will do the cutouts in reverse.