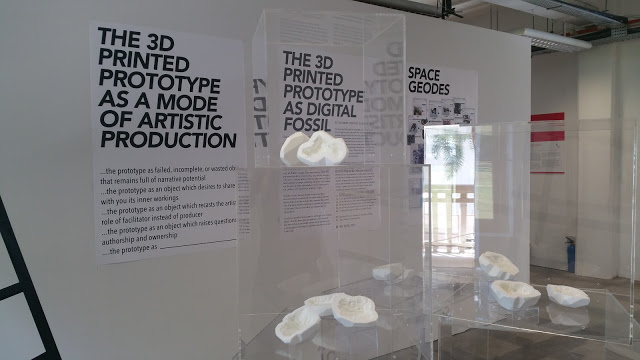 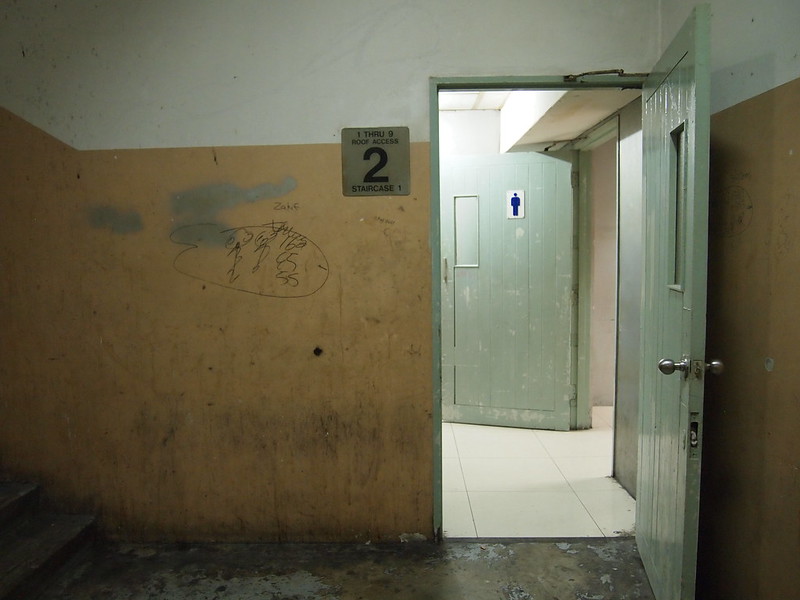 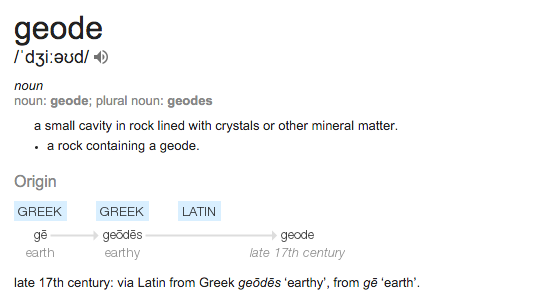 From 7 March until 13 March 2016, I’ll have a new work showing at Singaplural, a design festival which is the anchor event of Singapore Design Week. (Or rather, shall we say, it is a prototype for a new work…) 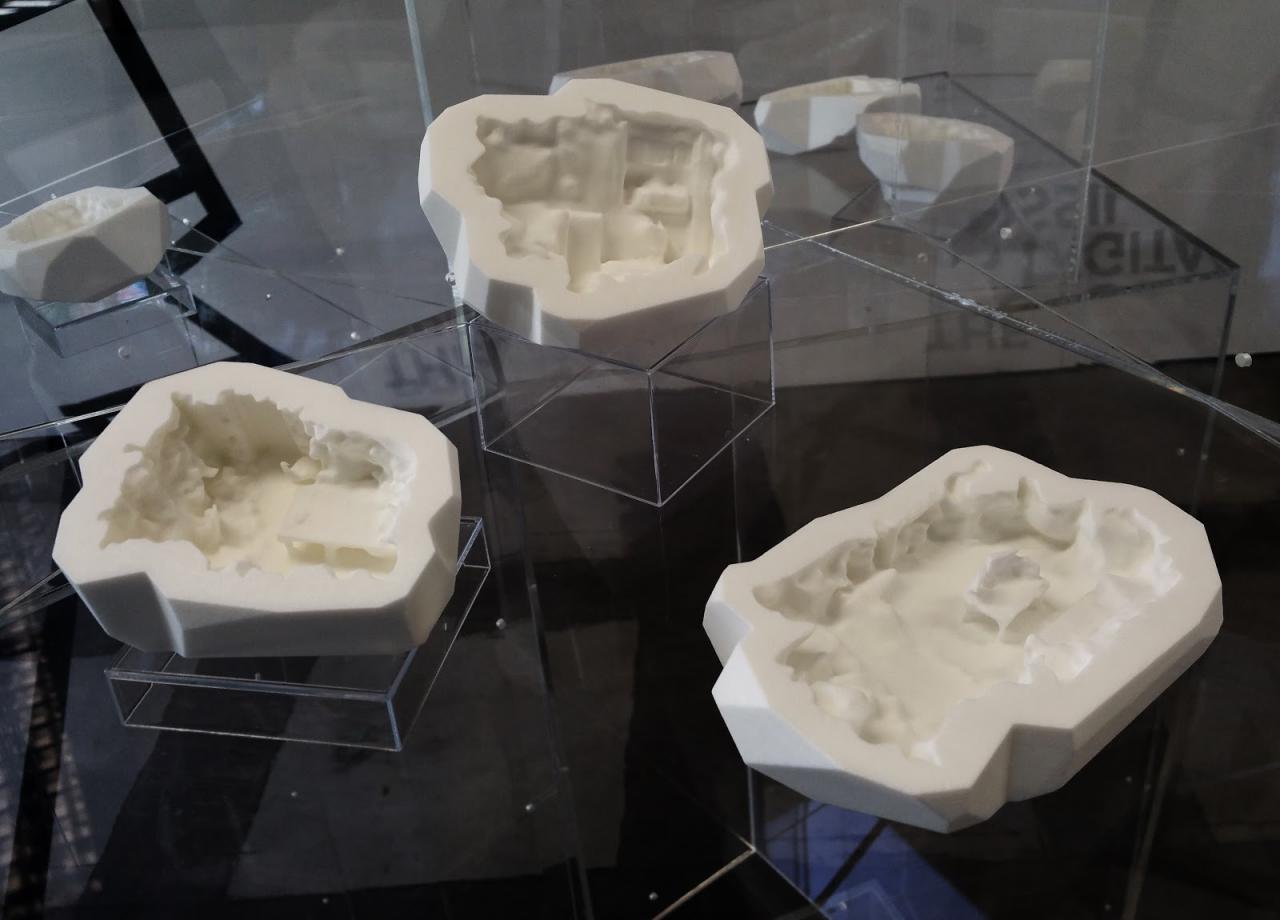 Space Geodes imagines the 3D printed prototype as a fossil in reverse and explores one possible way of materialising this notion of digital archaeology. The project originally began from a thought that it was funny that gcode looks so much like the word geode – g-code being the numerical control programming language used in most computer-aided manufacturing, and the name for the format for files which are used to give instructions to 3D printers and CNC mills.

As 3d scanners and 3d scanning apps become more easily accessible to consumers and amateurs, I noticed that one of the common types of scans that is always being shared by users online is that of the room they happen to be in – a living room, a bedroom, a working room, etc. But as with the uptake of any new technology, human error, technical problems and misuse of tool comes into play, compromising the quality of the scans. 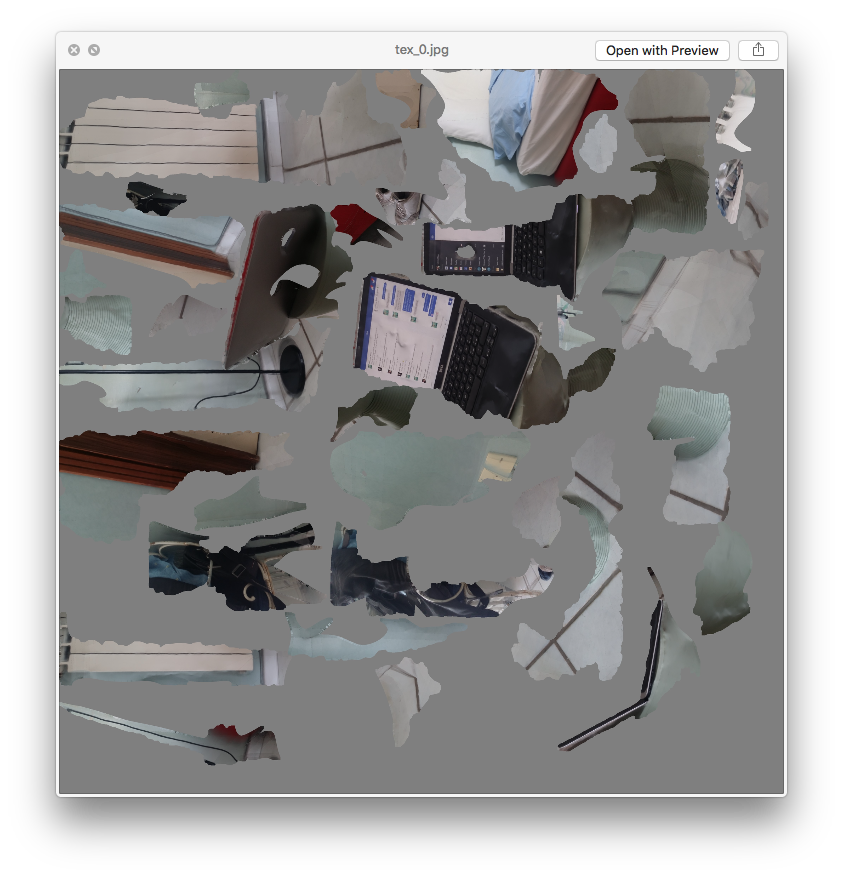 Hundreds of poorly scanned domestic interiors have been semi-anonymously converted into incomplete surfaces, afflicted with too little information or impossible geometries that prevent them from being properly understood by machines and rendered into real objects that can exist and be manufactured into the physical world. 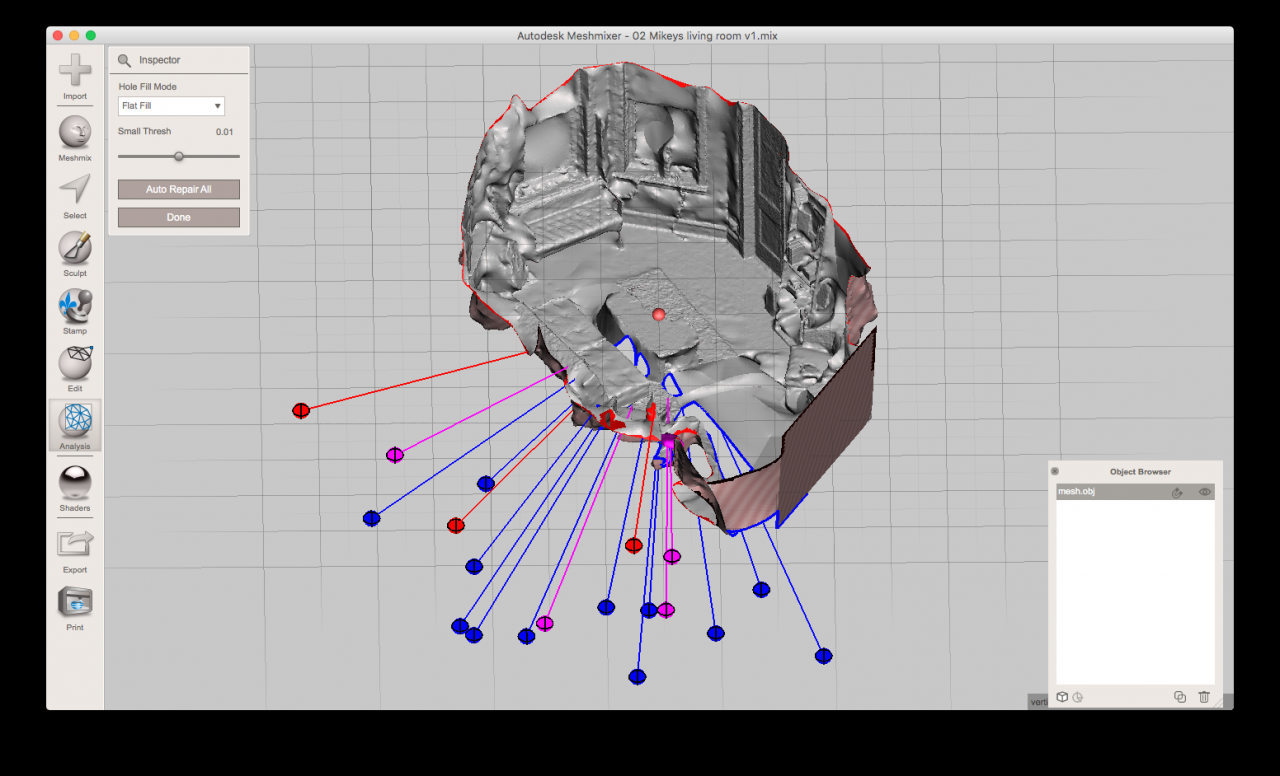 Unable to dig for material remains for clues of the recent human past in my highly urbanised environment, as digital archaeologist I have instead remixed the 3D models of rooms found on creative commons with an icosahedron and then plane-cut them into new forms, like how a lapidarist might cut open a geode.

The “geodes” are produced using a Selective Laser Sintering (SLS) process, which involves using a high powered laser to fuse plastic powders – synthetic polymers of petrochemical origin, which completes its process of becoming a digital fossil in reverse.

I excavate the remains of these human spaces, fix the holes in the models, and prepare the 3D data to be sliced for 3D printing. The precisely structured layers within the resulting gcode/geode reveal the split-second shifts in perspective within the domestic space; the fluctuations in data capture which resulted in the imperfect transfer of physical reality into machine-readable 3D data.

This digital fossil forms an inversion of interior into exterior, fossilising a moment in space and time.

Meshmixer is undoubtedly one of the easiest and most handy application for fixing 3d models (plus it is free!). There’s probably no easier or more dummyproof way to hollow out an object, add escape holes for draining excess material, and fixing/filling holes in models.

Meshmixer utilises a contextual menu – that means that you must have selected a specific type of part in order to see the available options for it. Therefore if you only select one mesh, you will not see the join/boolean menu. That different kind of editing menu is only available once you select two meshes or more. 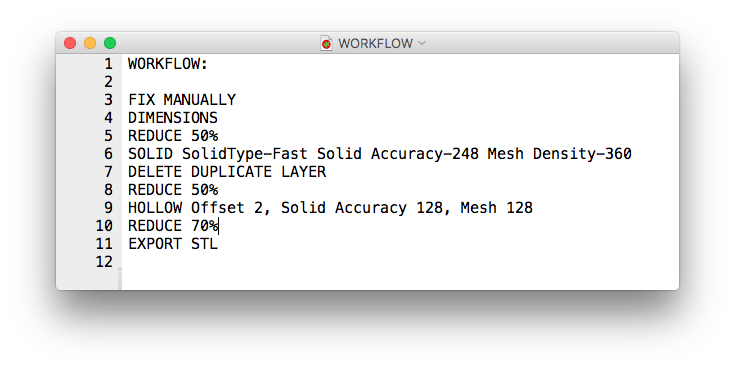 To some extent, you can use Inspector to fill most holes. But it can’t do all the guesswork for you if the file is too convoluted. Sometimes you’ll need to use a combination of Fill (F to fill – A to accept, Esc to cancel) and Bridges (⌘B). I found that if you have learnt the shortcuts you can just open a file and type all the shortcuts in order and then leave it to run that sequence of edits that you want (it might take a while). It is useful to clean up the file by pressing S and selecting on the main object (in orange) and then pressing EIX – E to expand selection to anything connected to the same mesh, I to invert selection to select stray bits and pieces in the file which are not connected to the main mesh model, and X to delete those tiny glitches.

“Reduce” function: Reducing the complexity of the models at every stage really brings the STL file size down drastically, which helps as many commercial printing services have a file size limit. You can reduce the total number of vertices without losing too much quality, but like with any kind of compression, if you just wildly press the reduce button then some details may get unexpectedly smoothed out, so you need to do a visual check from time to time.

“Plane cut”: you literally just “cut” with your mouse by drawing a line which indicates the angle and location of the plane on which the model should be sliced up. So natural.

As for improvements I wish it would have are – firstly, I think Meshmixer would benefit from having some sort of timer which indicates how much time will be required for each process. Most 3d software gives some sort of indication of how long each process takes (eg: Blender also will create an alert to tell you when it has finished sampling whilst you are in another window). Sometimes Meshmixer takes so long and my computer sounds like an aeroplane and I worry it will simply crash because I’ve made the mistake of running a process on a mesh with too many vertices. If I see that the estimated processing time is too long, it indicates that perhaps there are problems with my model that I should be fixing before making it more complex. Being able to see the process time and then abort a time-wasting process accordingly would be useful…

Secondly, Meshmixer does crash a whole lot and at least it does restore my work most of the time, but it can be quite temperamental… I really wish Meshmixer didn’t crash on my mac so often. Perhaps my 4 year old Macbook does not have the power to do the job. But I guess Meshmixer does the job!

Responding to the site

When I saw the site at 99 Beach Road for the first time on Friday, I saw that the window opened up to a view of the Rochor Flyover, which slopes downwards. There is the constant movement of cars at an angle, which contrasts curiously with the hard straight lines of the Gateway Towers in the background – two perfectly trapezoidal shaped knives of steel and glass. 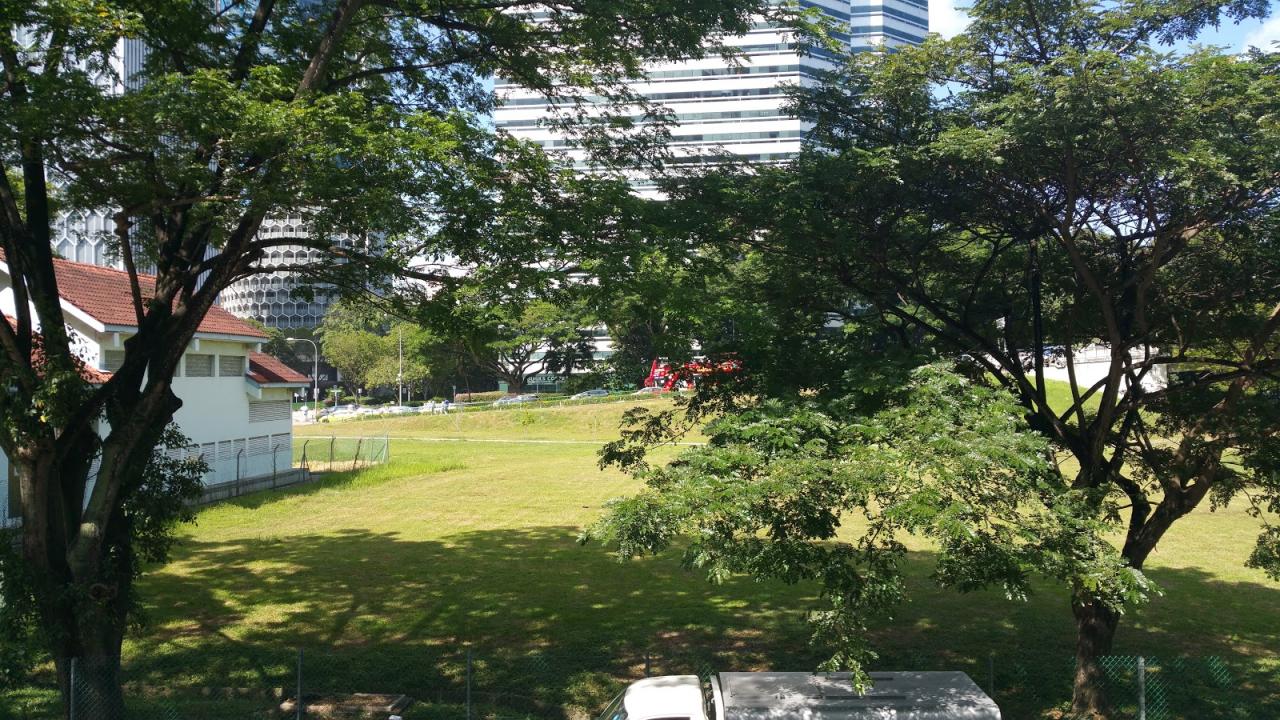 View from the Window

I wanted to introduce a gridded pattern to the space which would play on the view from the window and also suggest a confusion of depth, which is the error which the machine introduces into the 3d scan of domestic interiors. A few years ago I worked on a installation with Jeong Hee Woo which involved making a live-sized outline of a HDB flat and South Korean flat in black tape. So I thought of introducing a warped grid into this space using black tape again – ah! The good old fashioned all-synthetic polyester+acetate+nylon tape. 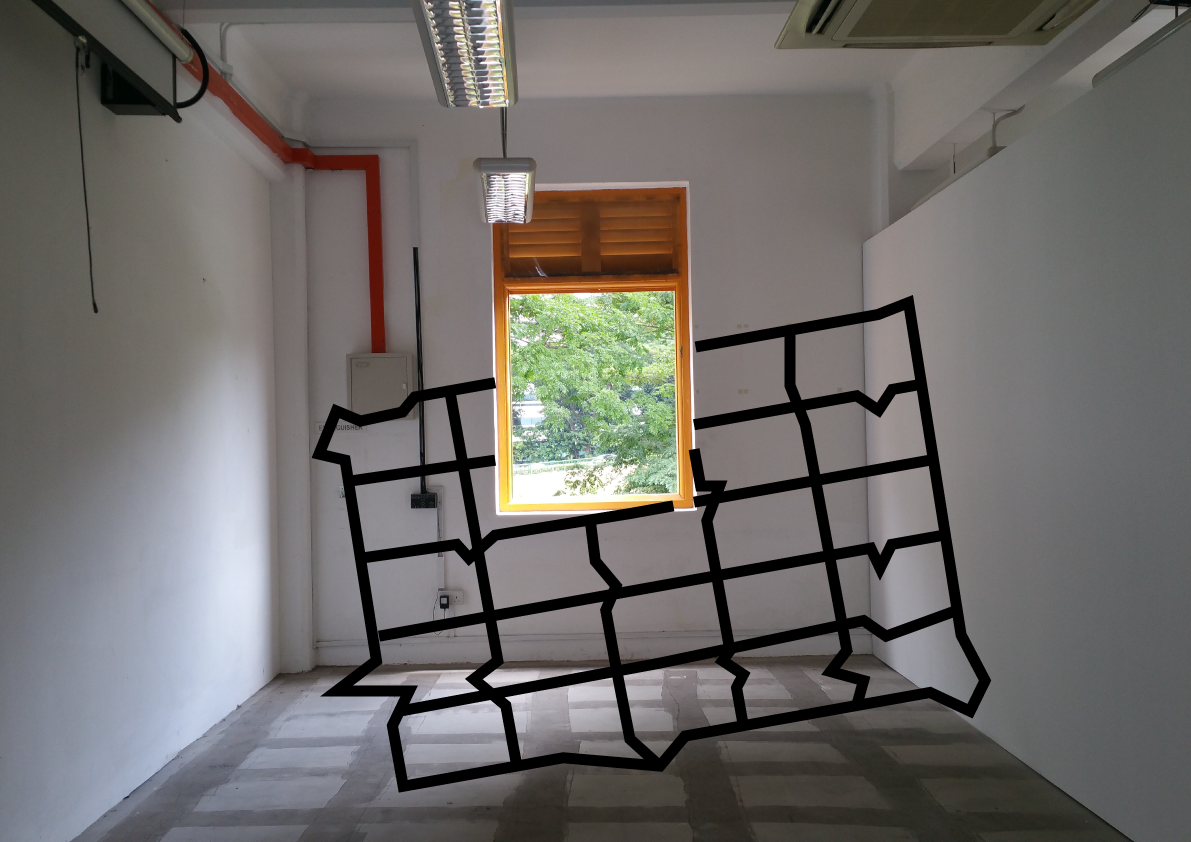 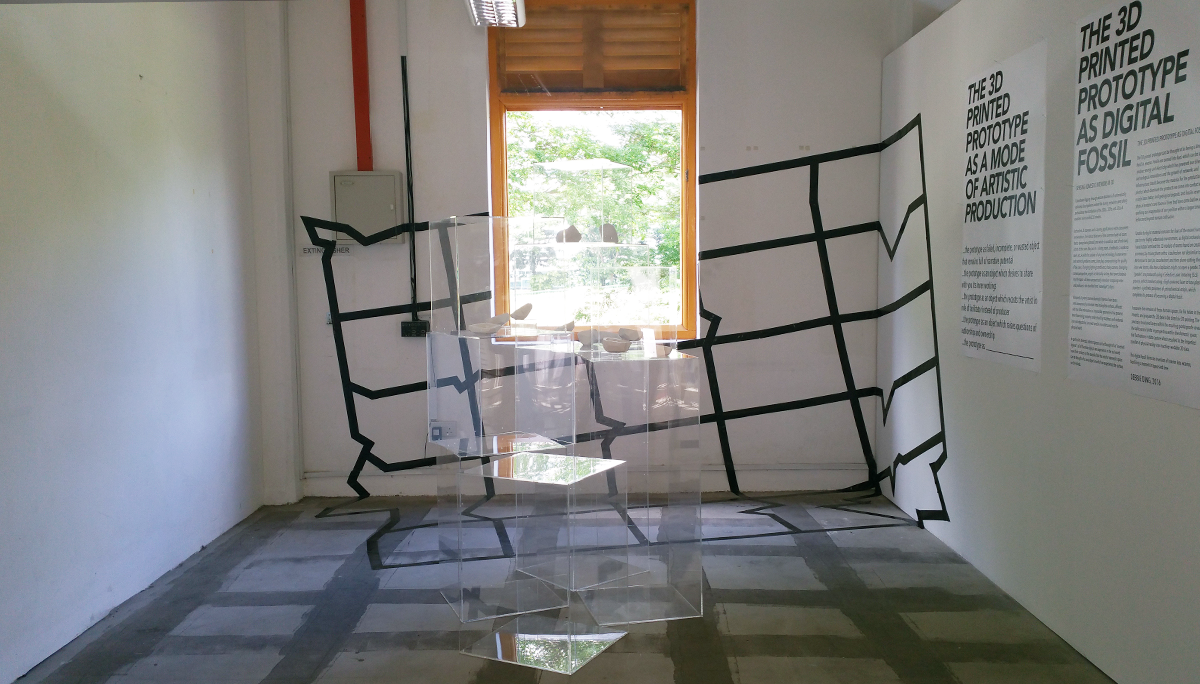 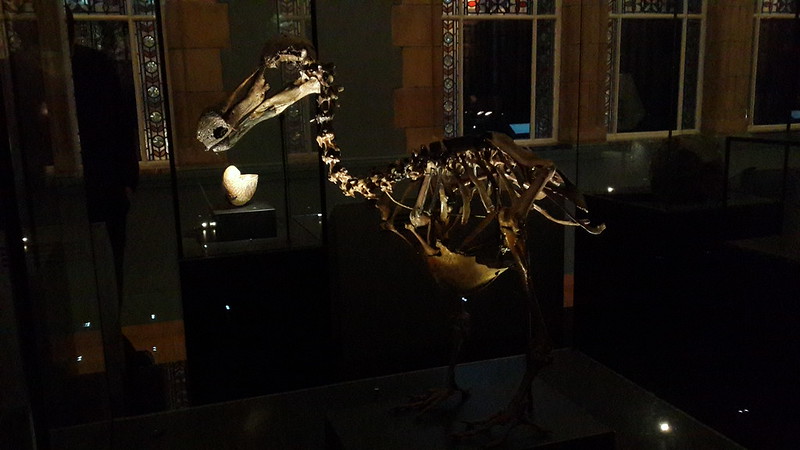 In a small, special room tucked away in one corner of the Natural History Museum are a number…
Debbie Ding 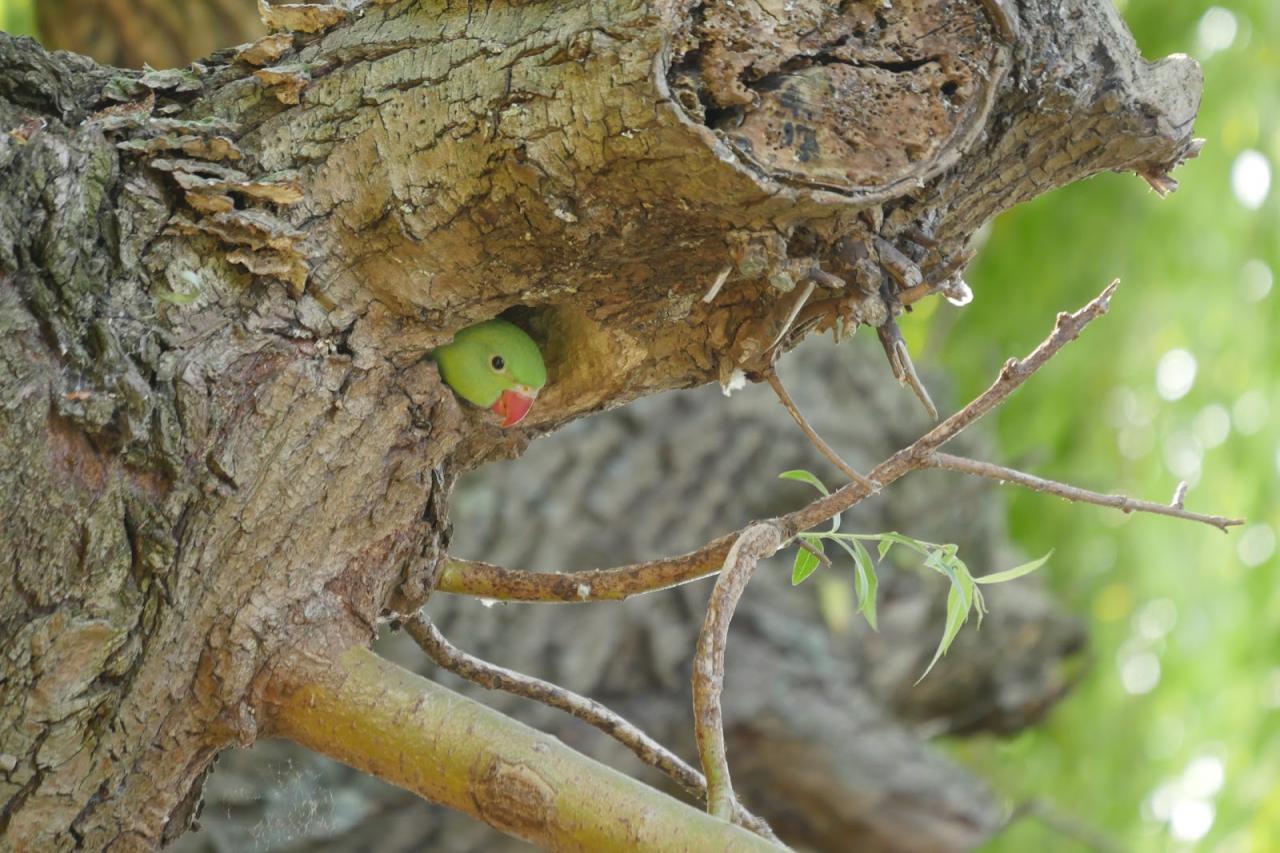 I’ve been labouring over my remaining documentation of archives and libraries in London, but right now we interrupt…
Debbie Ding