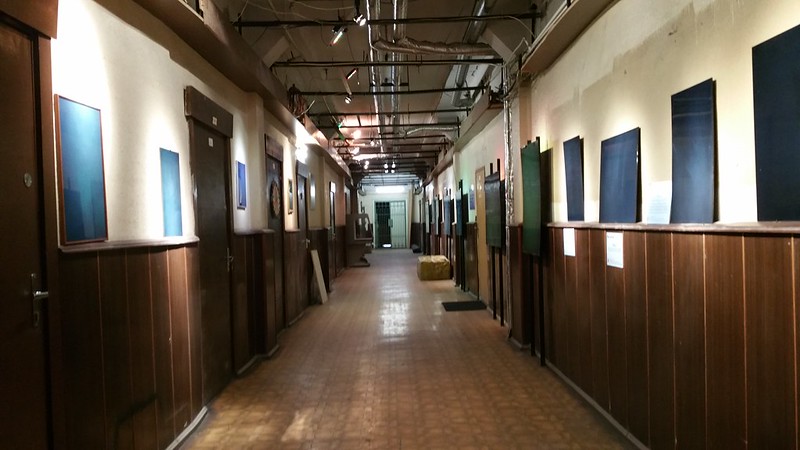 When I was in Canberra as artist-in-residence with the Australian War Memorial I managed to see some really amazing holograms (with many thanks to the Australian War Memorial for arranging this and National Gallery of Australia for allowing me to see their collections!). Thus I began hatching a crazy plan to make some holograms, which led me to travel to Vilnius to visit Geola (“General Optics Laboratory”), a company which has been producing analogue holography as well as developing a really interesting technique of digital holography using pulsed lasers. Geola’s pioneering holography techniques had also been mentioned by a number of Australian fine art holographers such as Paula Dawson.

(It is always worth noting that for a moment in time, the hologram had really seemed poised to be the successor to the photograph, with many fine art holography programmes developed in universities around the world including in Australia and UK between the 1970s and 1990s – even the RCA used to have a holography department) 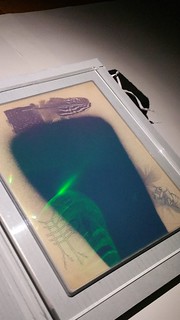 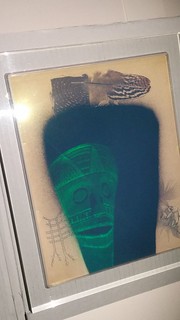 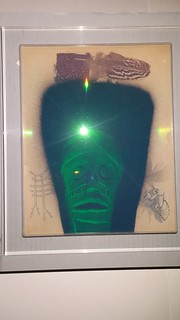 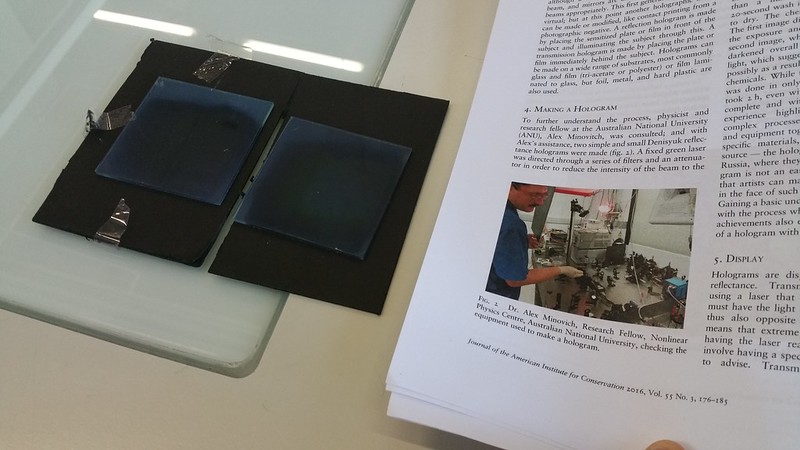 Hologram made by Andrea Wise to test conservation techniques for holographic plates
Canberra, April 2017
I think what interested me most was how Geola had interpreted the method of digital holography into holopixels. One of the senior conservators at the National Gallery of Australia, Andrea Wise (who also had a passion for understanding how holography worked), told me of a useful way of thinking about holograms: if you break a corner off a hologram, that corner itself will already contain the data of the entire image. The concept of the holopixel then makes this fragment-whole relationship evidently clear: each holopixel is a separate element but each of the holopixels contains ALL of the image data at the same time – they are optical elements that when properly illuminated and viewed from different angles, will be perceived as a specific colour dot. When we view all the colour dots as a whole, it becomes interpreted by the eye and brain as an image that changes when viewed from different angles. (Viewing it with two eyes completes the illusion of our perception of the image as a three-dimensional scene).

Although the underlying physics is well-known and widely understood by scientists and students of science alike, the hologram somehow remains largely misunderstood by the average layman. Since the hologram exists as a physical photographic plate, it is sometimes confused as an extension of photography, although a hologram is not at all like a photograph because a photograph is an image but the hologram is a lens. Furthermore, today the word “hologram” is very loosely used to describe so many optical illusions (eg: pepper’s ghost, rear projection, volumetric projection, lenticular prints, virtual reality) to the point that most people may may not know what a hologram really is. When I tried to talk about my plans for the project to other friends, quite often a friend might say “Oh! Holograms! I’ve seen/made some before!” only for us to discover later on that what they thought was a hologram was not actually a hologram…

Even American electrical engineering professor Emmeth Leith, the co-inventor of three-dimensional holography, described his holograms as a “grin without a cheshire cat”. Over the years, three-dimensionality and then imagery was successively compromised, largely leaving only movement and colour behind. Technical limitations in holographic image production as well as certain cultural and commercial conditions have led to the overall flattening of the holographic image on both physical and symbolic level, resulting in total collapse of the holographic image to the image plane – to the point that today we mainly see the hologram in flattened embossed forms, in small particles…

Google Image Search: “Holographic”
As hologram retailers struggled to build a consumer market they began aligning themselves with science museums and technology centres to try to capture national audiences on a mass consumption level. Ultimately this distanced the hologram further and further away from being a medium for narrative. Despite having a premature demise in a commercial sense, the hologram still entered cultural consciousness as a medium designed for future mass consumption, in its general disappearance from the public eye it transformed into a staple of science fiction films and the imagination. But it is not just in people’s imagination that the hologram has been changing. Holographic techniques have also been continuously developing! You might be surprised to know that today you can produce holograms from moving images, and that they can be in full colour today! 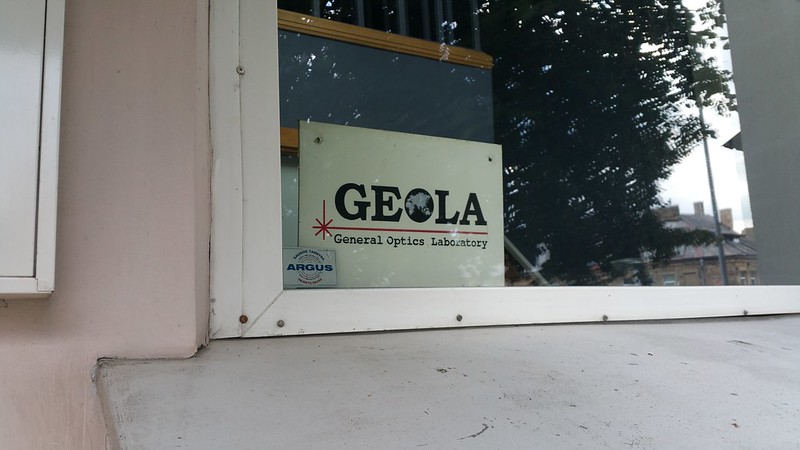 On an unexpectedly normal and ordinary street on the other side of the world, sits the rather nondescript office of the lab called Geola. 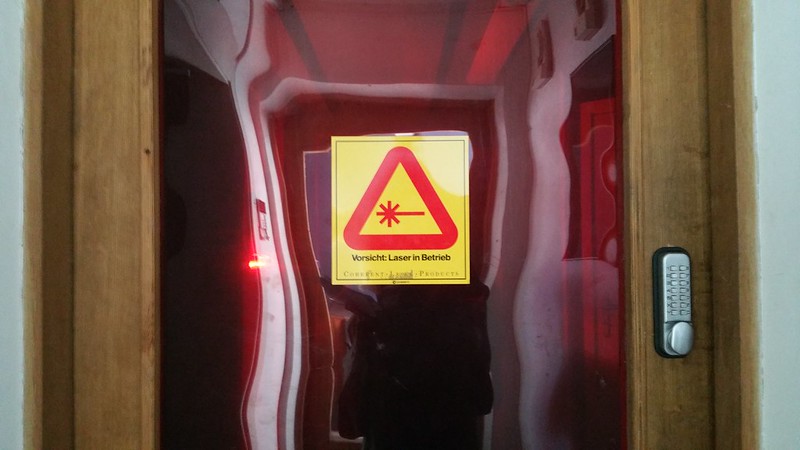 It used to be that analogue holography had to be on in labs which were completely free of vibrations – so the labs would involve huge concrete tables and had to be far away from civilisation and all the vibrations from cars and noises. But Geola has devised a pulsed laser system which has no such vibration problems! (Cars are running on the roads outside! You can walk in the room with the printer inside it!)

This was a room that had to be seen in person. 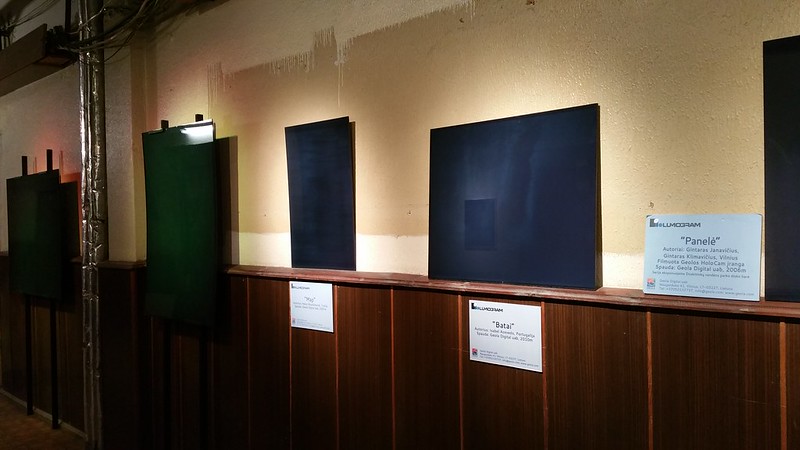 Despite its similarity to a photo plate, a hologram is nothing at all like a photo, and there’s also no way for me to adequately represent it in photo alone. 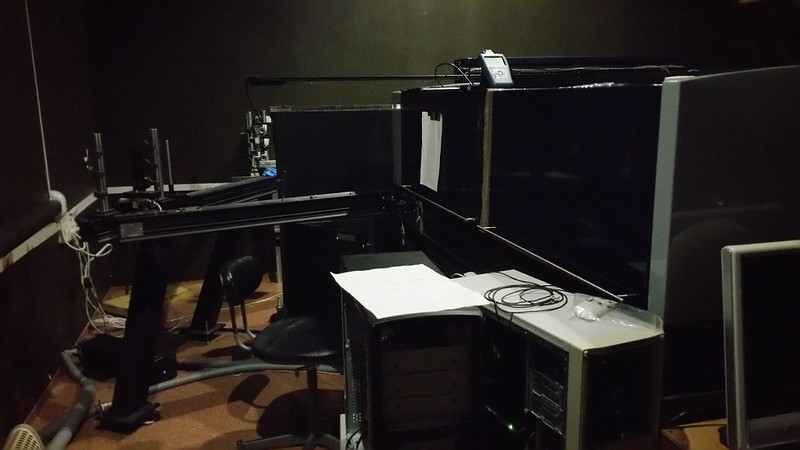 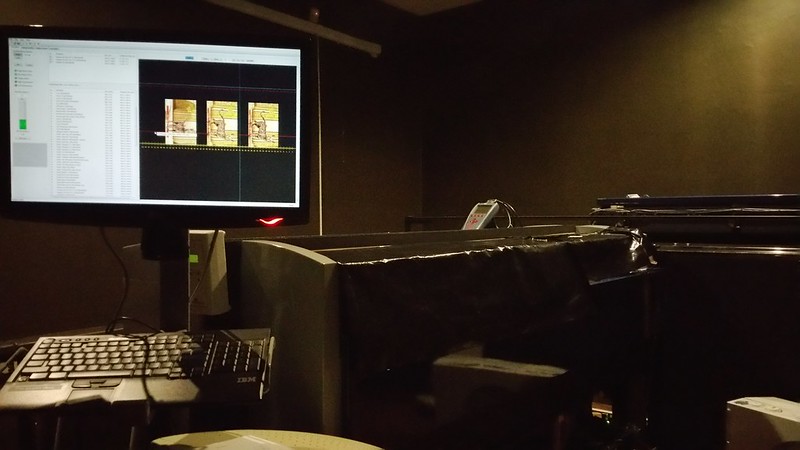 This is the printer. The holopixels in this digital holograph are recorded onto photosensitive media using two pulsed laser beams – one is spatially modulated by using LCD display and focused into a 1.6mm x 1.6mm square acts as the object beam, another laser beam acts as the reference beam. The modulation is done such that the object beam at the point of interference with the reference beam contains the same information that would have come to this point from a real object (except that here we might be using film footage or 3D rendered scenes as the source). The reference beam interferes with the modulated object beam, recording the hologram of the image on the photosensitive media. 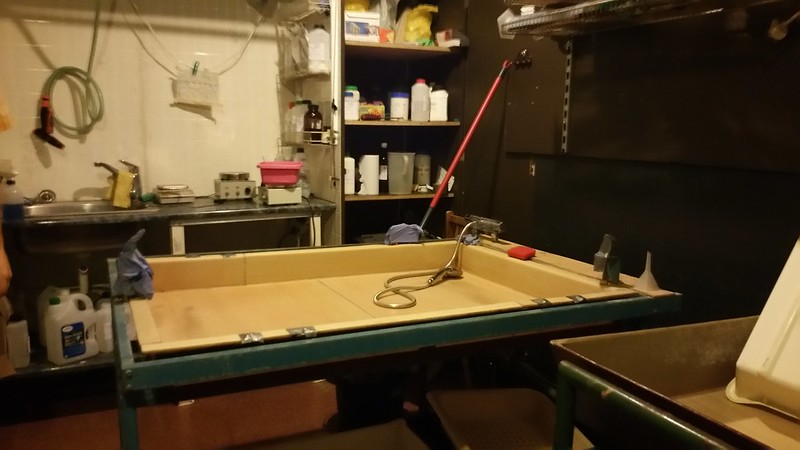 After exposure the holographic photoplate is processed using a conventional photographic process. 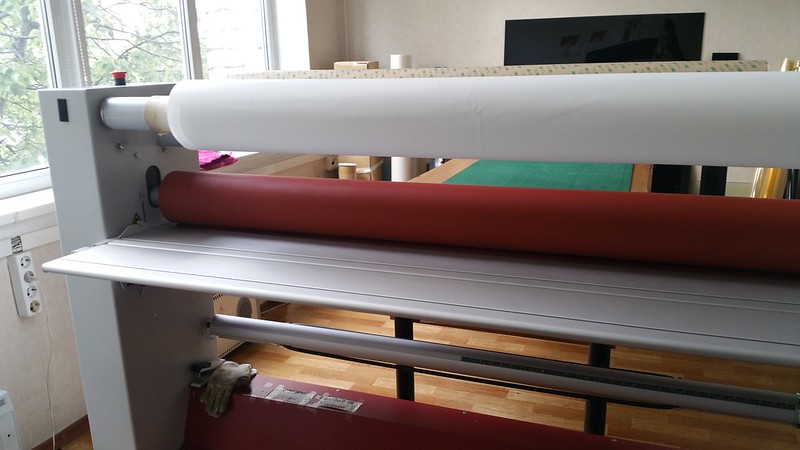 After chemical processing the photoplate is dried and then the holographic photoemulsion is protected by lamination of black self-adhesive film and acrylic sheet using a standard cold lamination machine. 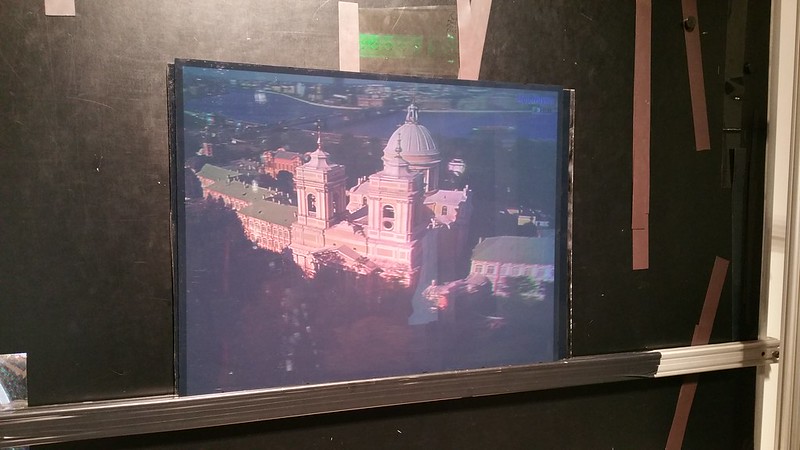 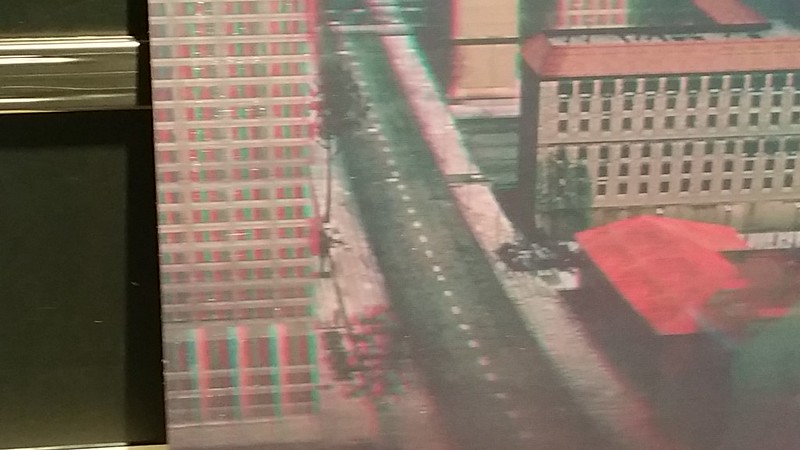 Thank you to Ramunas for showing me around Geola! 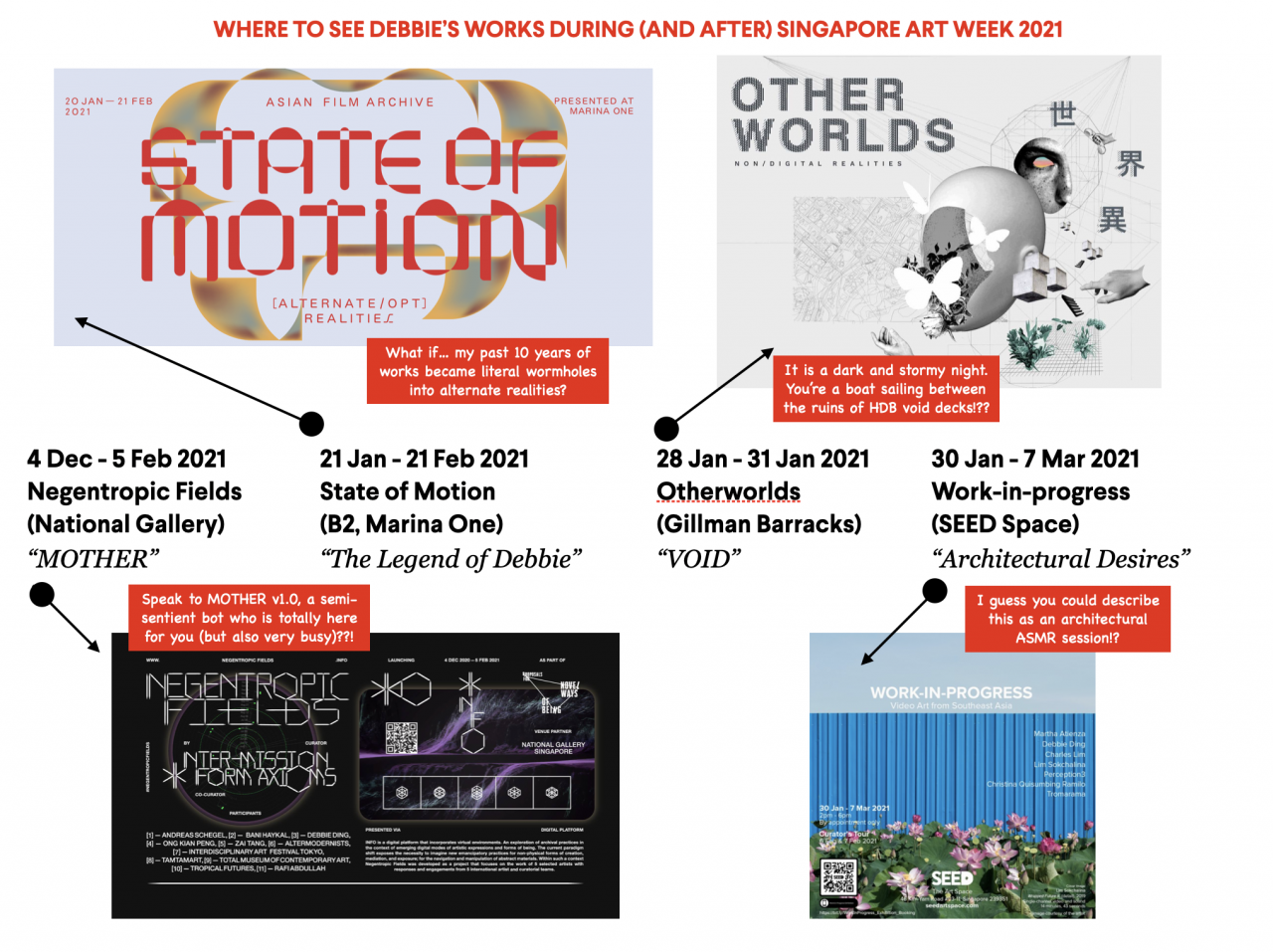 For those in Singapore at the moment, I have a couple shows ongoing/upcoming during and beyond Singapore Art…
Debbie Ding 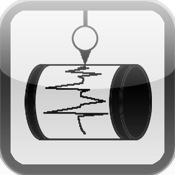 The circle line played me out once again. Lured by the sign that said “to Dhoby Ghaut”, I…
Debbie Ding