We are taking our food to the next level. We are starting our experiments with agar and alginates (spherification). We received various strange white powders in the post and combined it with a syringe and tubing kit brought from Singapore. The first thing we made was Bell Pepper Soup Agar Spaghetto. We roughly cut 3 bell peppers, a few cloves of garlic, some onions, and a liberal sprinkle of paprika, and fried them until they caramelised. We fried it hard. Then we added water and one vegetable stock cube and put it into a pot. We continued to simmer this for half an hour. Then we blended it. Here is the sous chef assisting with the blending process. We blended it in batches because we were blending boiling hot ingredients. A cloth held on top of the lid helped prevent accidents. At this point we already had an awesome soup. We ate a bowl of it and agreed that it was already awesome. We could have called it a day at that point; we could simply eaten all the soup, but we had much bigger ambitions for our soup. Next, we mixed 300g of soup with 6.4g of plain white Agar Agar powder. This was based on a random unattributable calculation I had found on the internet stating that 150g of liquid should be mixed with 3.2g of Agar to jellify the liquid. Actually I can’t recall where I read it or why I thought it was accurate. Anyway. It sounded like a plan. We loaded up the syringe and tubing with agar soup, doused the tube in a wok of cold water for 2 minutes, and then tried extruding it.

But hold on. Let me explain something here before we go further. When we started cooking, I had envisioned making a beautiful, smooth red pepper soup and a bright red spaghetto. But when I opened the fridge I realised that the sous chef had purchased Assorted Peppers instead of Red Peppers, so half the bell peppers we had were green. No big problem, so we made a slightly brown coloured soup instead then. Yeah, the brown, it would be a completely acceptable colour for a soup, why would anyone say otherwise?

Photo by georgepooney
Okay, but maybe it did remind us of something else in the end. Especially when our first attempts were slightly watery and admittedly extruded with a bit too much flatulence. We did not have a cheesecloth with which to strain the soup of its larger fibrous material, and this material was probably was interfering with its ability to gel uniformly. So I adjusted the amount of agar to 10g and reheated the soup before attempting the extrusion process. For your information, Agar turns solid at around 35°C and returns to a liquid form at 85°C.

Photo by georgepooney
This time the extruded Spaghetto looked acceptable. After we wiped the tears away from crying-laughing at our initial flatulent extrusions, and after we coiled our one single painstakingly-made Spaghetto into a shapely form, we settled down to eat our soup, now in jelly spaghetto format. We would be lying if we said it went down smoothly, because jellied soup does take some getting used, but the point of this entire endeavour was, of course, to make challenging food and that would run contrary to the ordinary notions of how food ought to be prepared and served, and this we had accomplished. 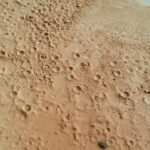 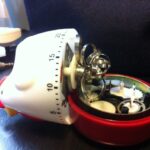 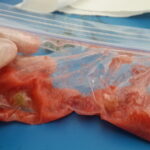 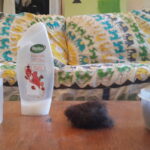 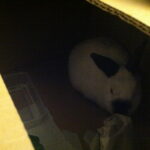 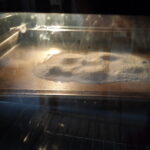