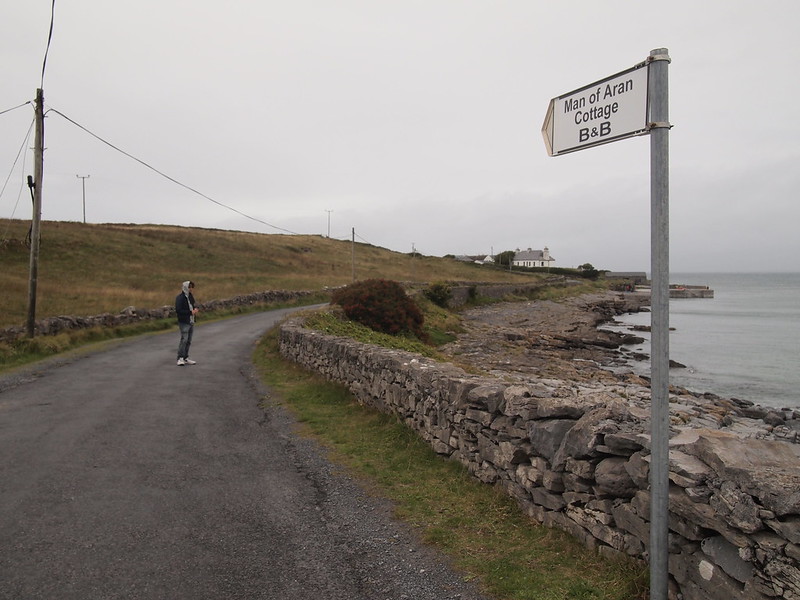 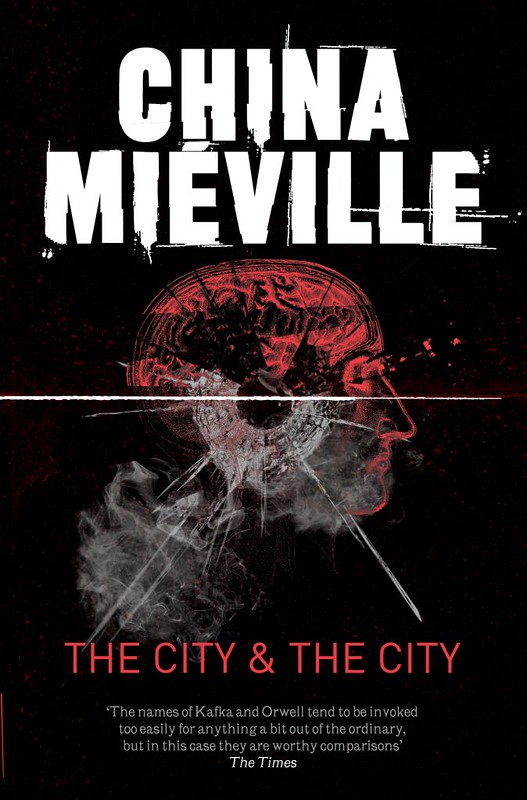 TEAM FIRE visited Inis Mor the other day. I asked to be taken to see the following: (1) a castle (2) an irish pub (3) a cliff by the sea (4) ROCKS; the first three were easy to find and on the last item, George exceeded himself by deciding to take us to Galway and then to THE ARAN ISLANDS! Galway on its own deserves a whole post to itself but the Aran Islands was completely unreal. Picturesque, completely isolated, harsh weather and extremely beautiful terrain, the island of Inis Mor was apparently the model for Father Ted’s Craggy Island, and also the star of the documentary Man of Aran. We were to stay at a cottage that had been built for the filming of this fictional documentary about life on the islands, which had apparently represented a kind of traditional rural irish lifestyle, now lost in time…

To begin, the ferry ride was already something out of a storybook. One unaccustomed to the seas might be compelled to write home immediately after experiencing the life-changing highs and lows of the ferry from Rossaveal to Inis Mor. Seemingly death-defying, stomach-churning multi-storey heaves and drops over ridiculously high rolling waves of the Atlantic, at some points actually eliciting involuntary high-pitched screams from tourists onboard, clutching the armrests of their seats with white knuckles. With each roll, the horizon would completely disappear and reappear from view. We had already taken the largest ferry, a 400 seater, as we were told that the smaller ferries would not sail on days with poor weather. Indeed I’d imagine a smaller boat being easily swallowed by the waves. Having sat on a fair number of boats in my time but only in the relatively sheltered waters of Singapore, this kind of extreme sea-crossing was something I had never witnessed before. 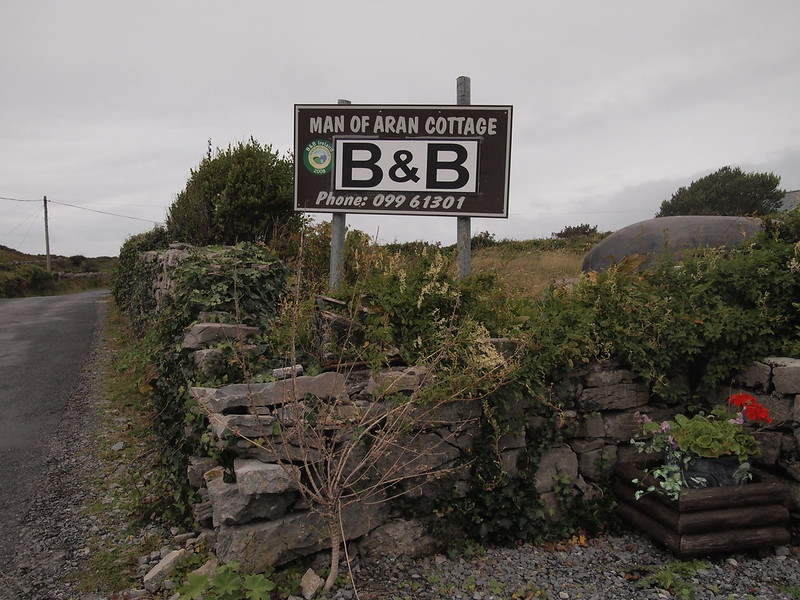 After some confusion and having to call for help to get a taxi after we wandered away from the pier (into what we realised was a completely sleepy town) – we were eventually received with much hospitality at the Man of Aran Cottage by Joe and Moira. We read that the cottage had been built for the documentary “Man of Aran”, hence its moniker. It is curious to think that it was probably built with the intentions of making it seem as authentic as possible, but now some 80 years on this house seemed as ancient as the others, perched on this unlikely point of the island.
The cottage is situated a fair distance from the “main town” area and this also meant there was absolutely nothing around us at night. The nearest shop (a SPAR, which closes at 6pm) and pub (Joe Watty’s) are close to the port, whereas the Man of Aran is located at the centre of the island, close to the fort. But in the morning, the view from the Man of Aran Cottage is fantastically spectacular. You know like when you hear the frightfully loud sound of a heavy wind whistling on the window when you sit in your city flats and pretend you’re far out in the wilderness? WELL PRETEND NO MORE! This is the real thing.

We were fortunate to have met Andrew at the Man of Aran Cottage; another guest at the Man of Aran at the time. He had spent almost a year on the island back in the 60s, and had penned a book about his experiences in a book, “An Aran Keening”. (We later went down to the bookstores in Galway and tried to find it). He was very kind to show us the way to the Pool na Bpeist or Pool of Serpents, and as we walked there I realised it was very very fortunate that he brought us there the way he did, for we would never have found it otherwise, and the approach he took was very much better. 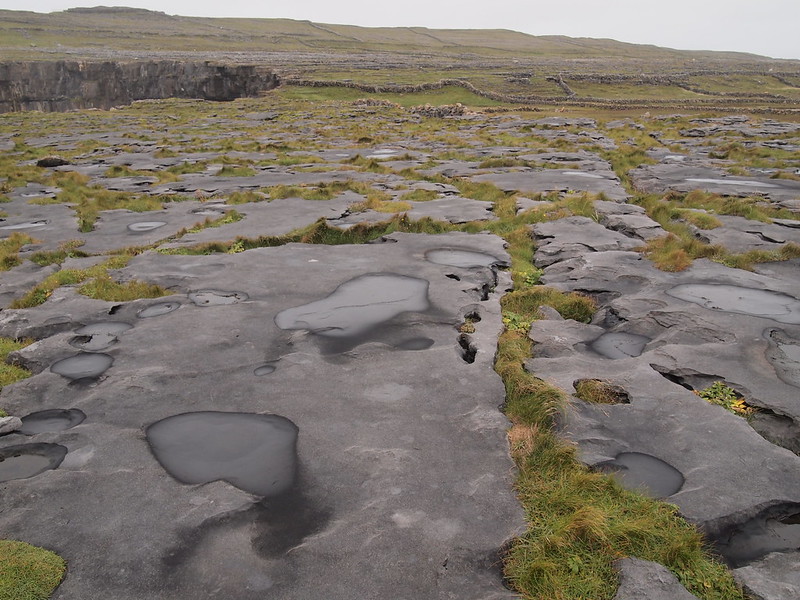 For the most part, it is simply covered in this endless face of rock, cracking at the surface. Most of the rock is patterned in bold grykes. The rock itself is similar to that of the limestone at the Burren across the ocean; Burren from “Boireann” which means “a rocky place”. 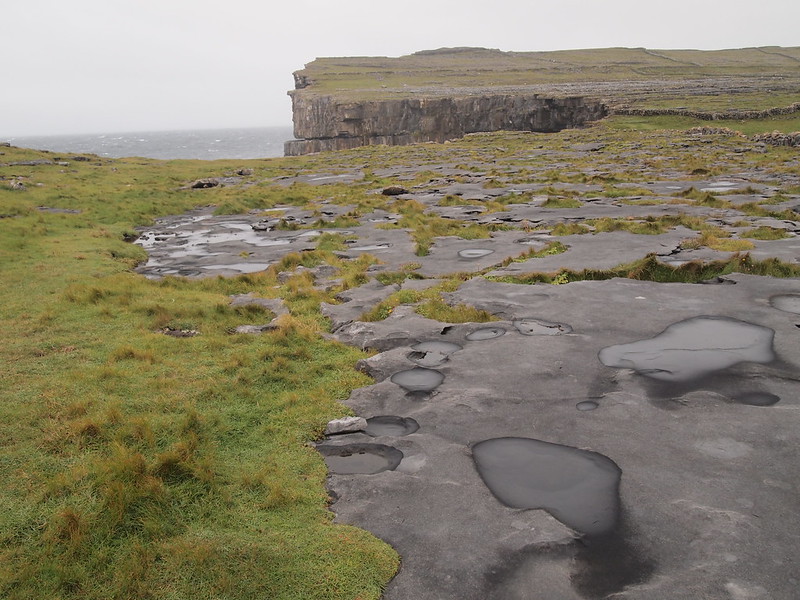 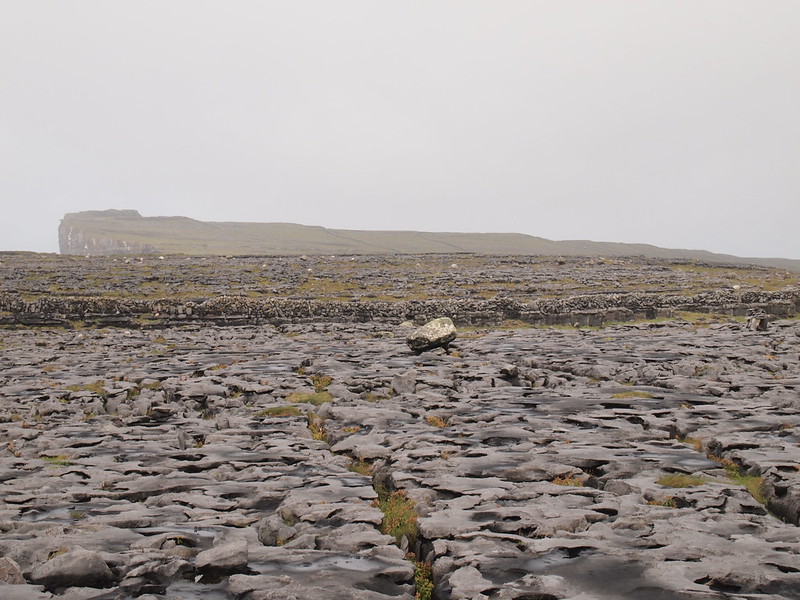 Glacial Erratics
Glacial erratics are rocks which do not belong to the rest of the rock below it and is thought to have been deposited on top of the surface when they were carried on a giant iceberg that floated over the rest of this island during the ice age. Then when the ice melted these large odd stones were deposited on top. 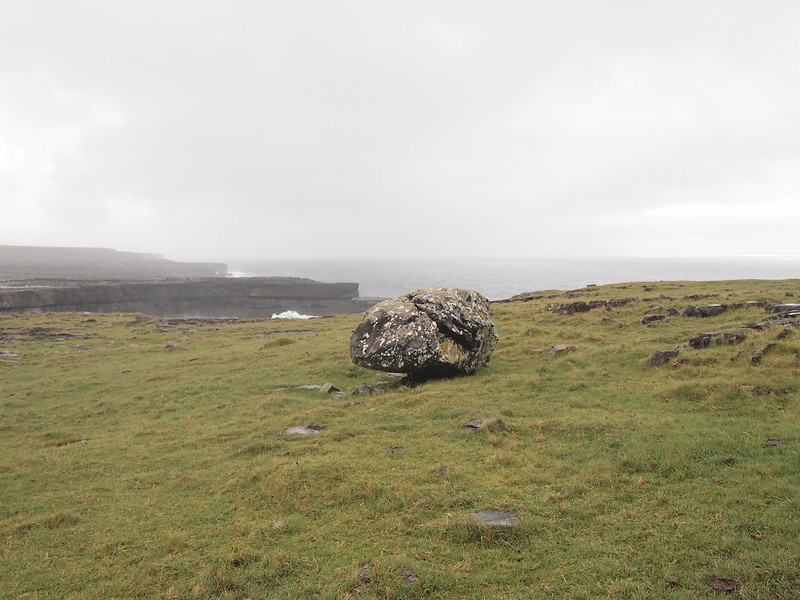 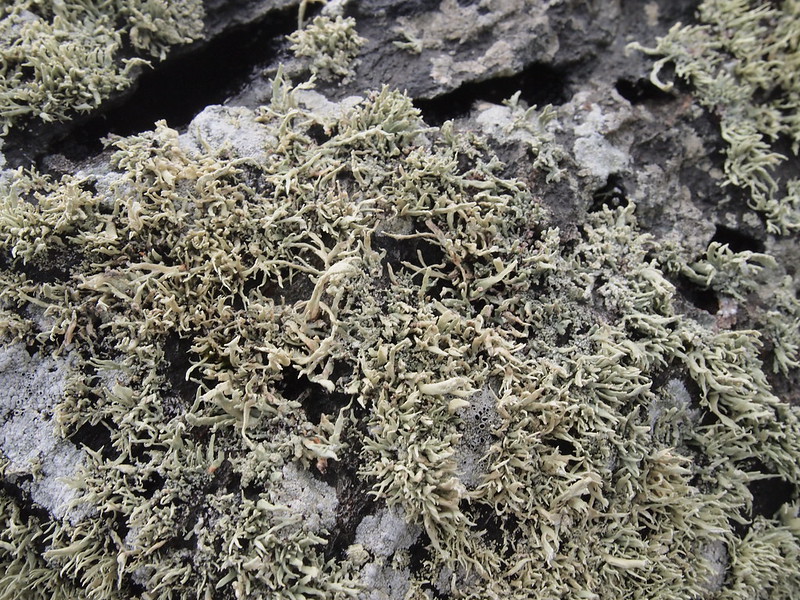 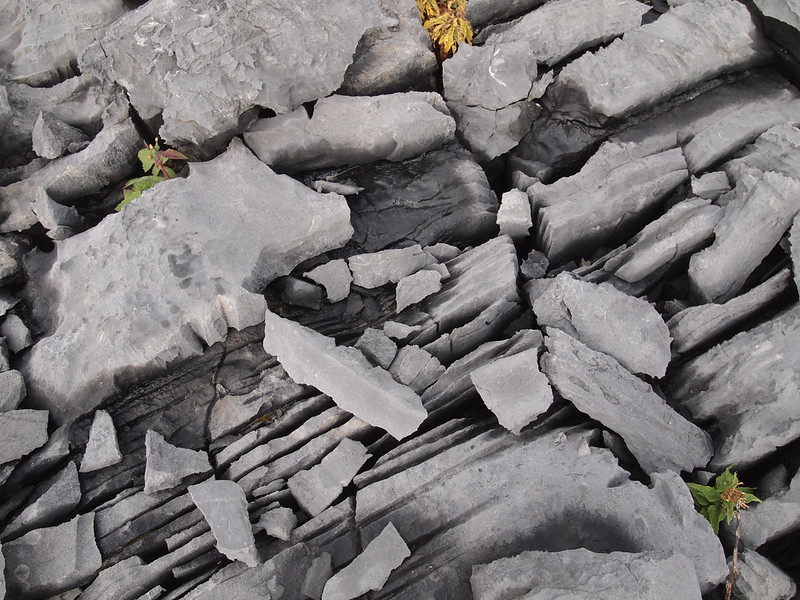 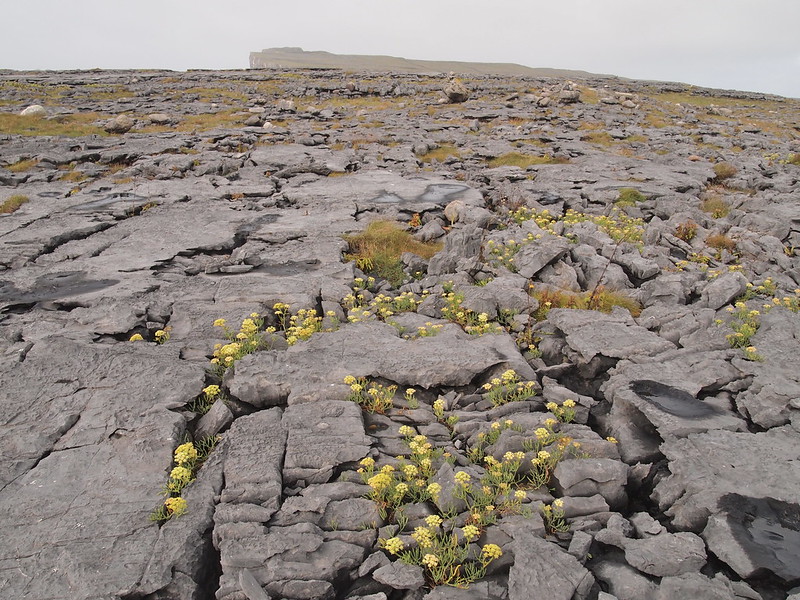 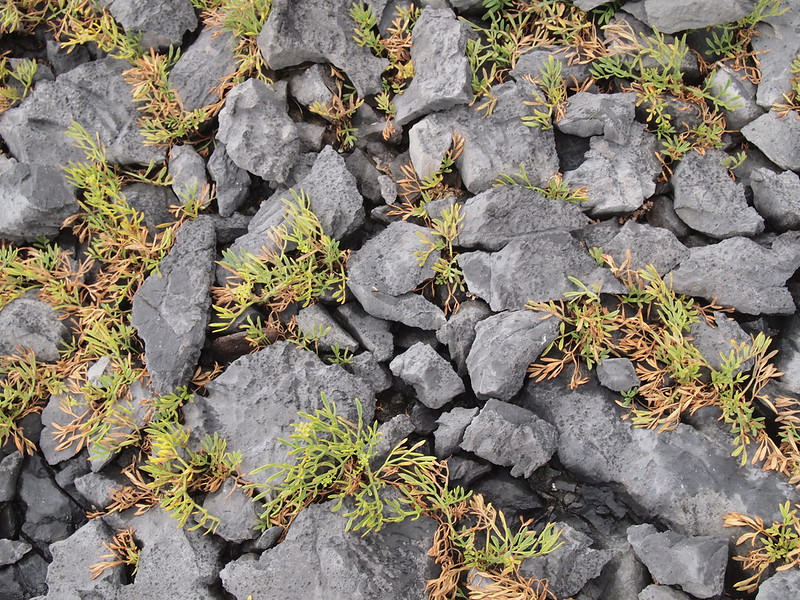 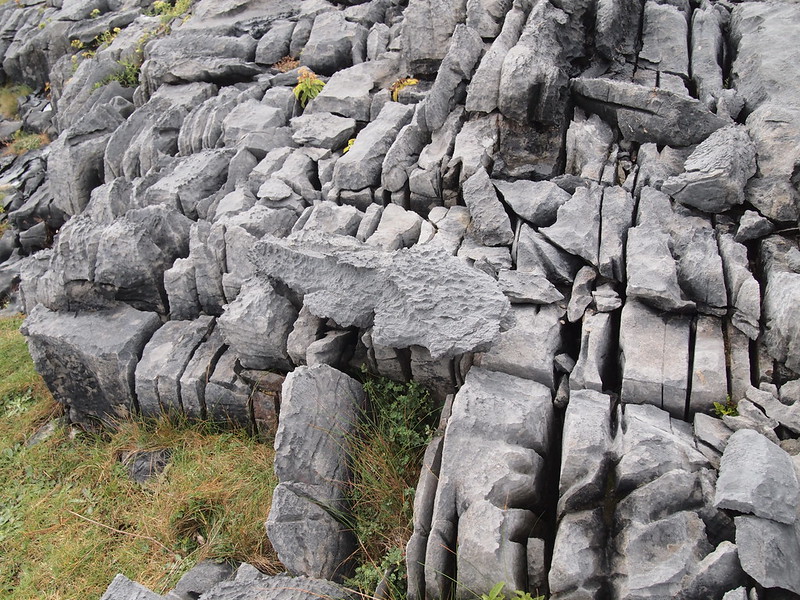 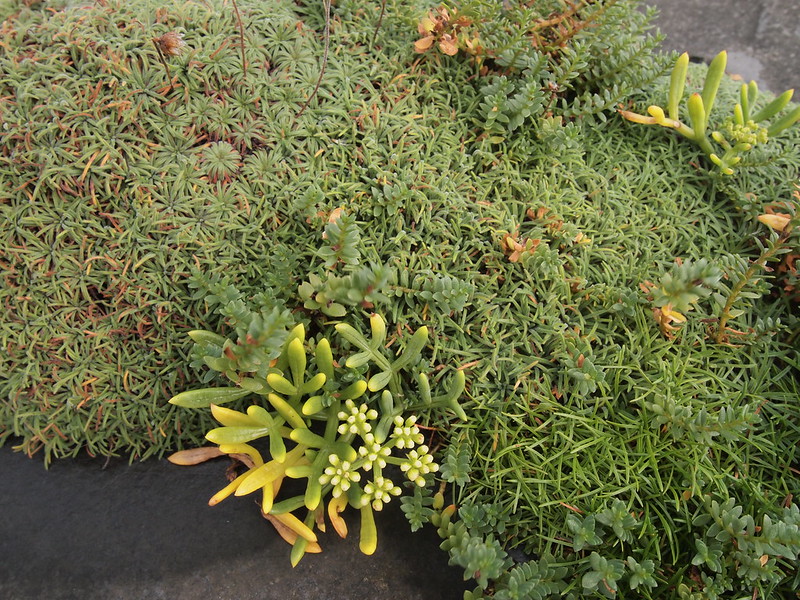 The plants that lived in the environment were also incredible. You would see these lovely little plants everywhere, growing between the cracks in this almost inhospitable environment and they would look so downy and soft and inviting but if you ever tried to peel one off you would discover they were ROCK SOLID. Tough as nails! Impenetrable! Unchewable! Teeth-breaking! Not to say I tried to chew them but attempting to dislodge a tiny corner of it was more like trying to chew on a car tire. 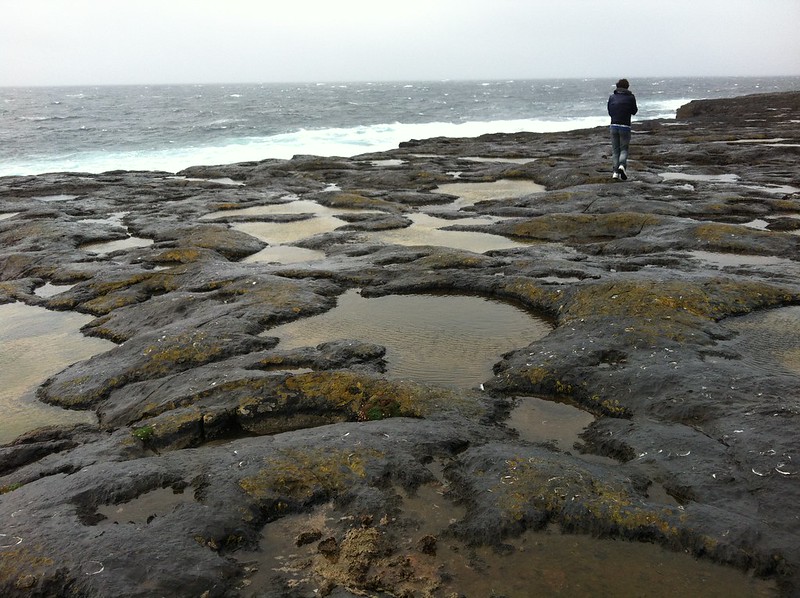 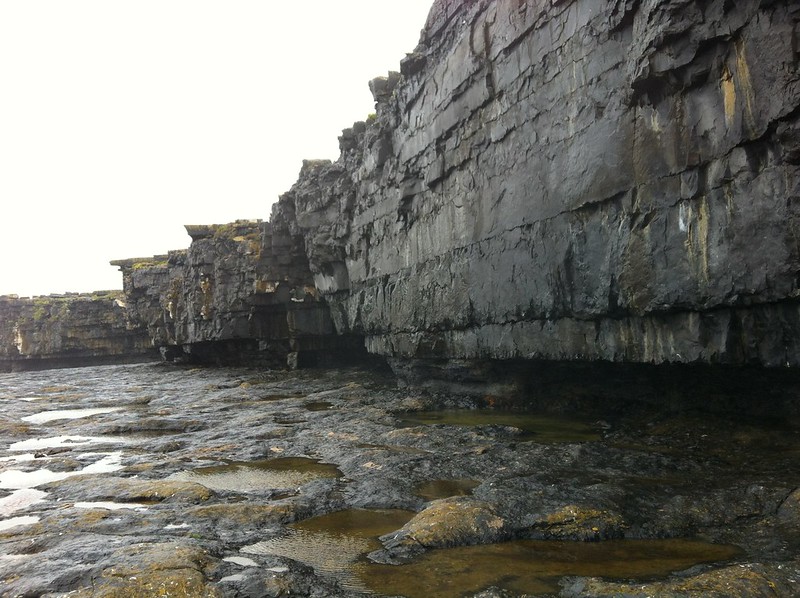 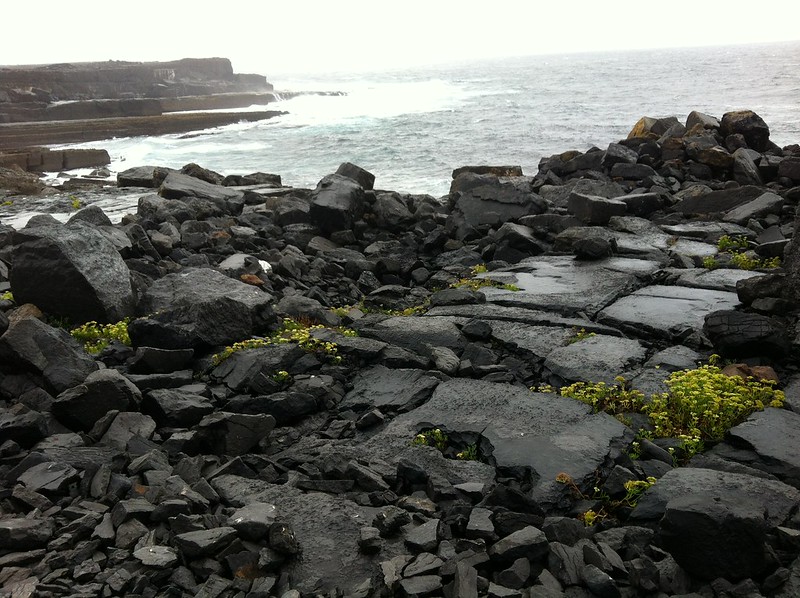 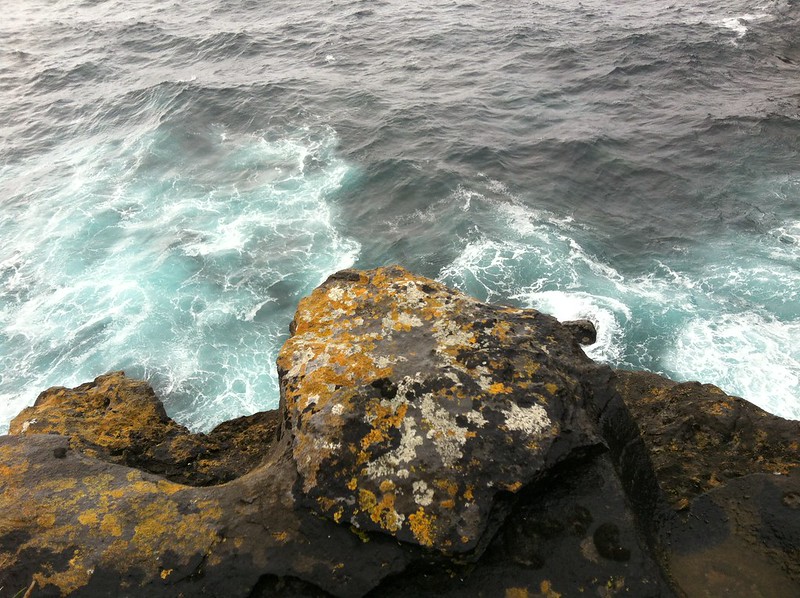 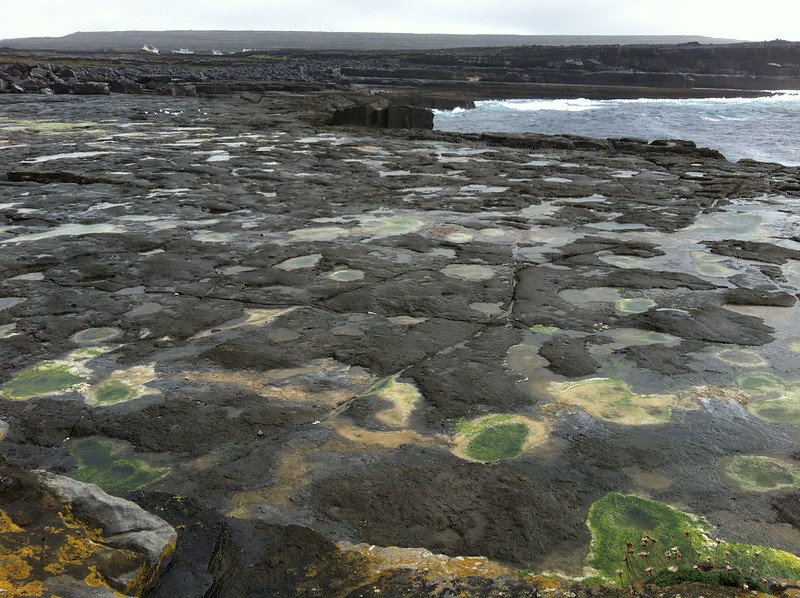 We were buffeted by strong gusts of wind, fit to blow a person off the cliff face, so we were sometimes crawling slowly towards the edge; creeping over the wet rocks of Aran, over an endless maze of low stone walls, endless landscape of nothing but craggy rock.

This is the Pool of Serpents (Poll na bpeist), a naturally formed geological feature which looks like a rectangular olympic sized swimming pool. Although this is not evident in the picture, as the winds were high (and we so unaccustomed to walking on wet rocks) we were terrified walking so close to the edge… 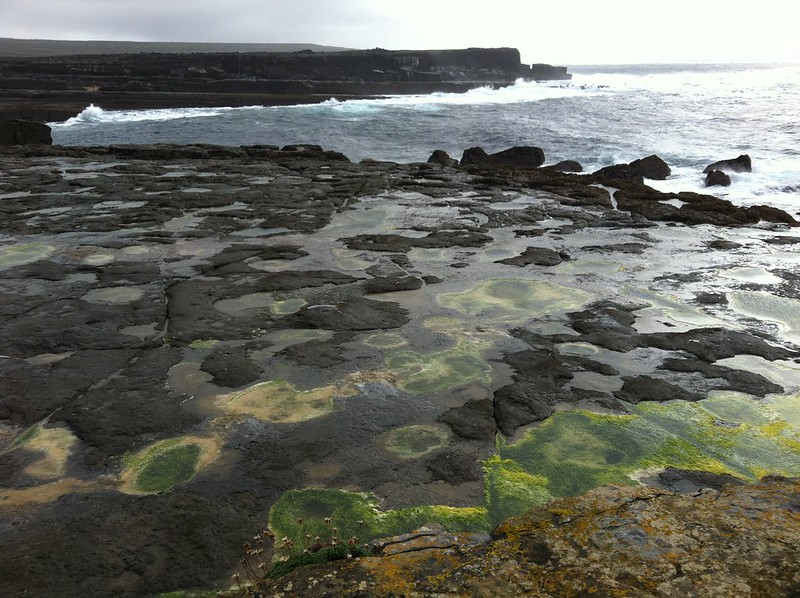 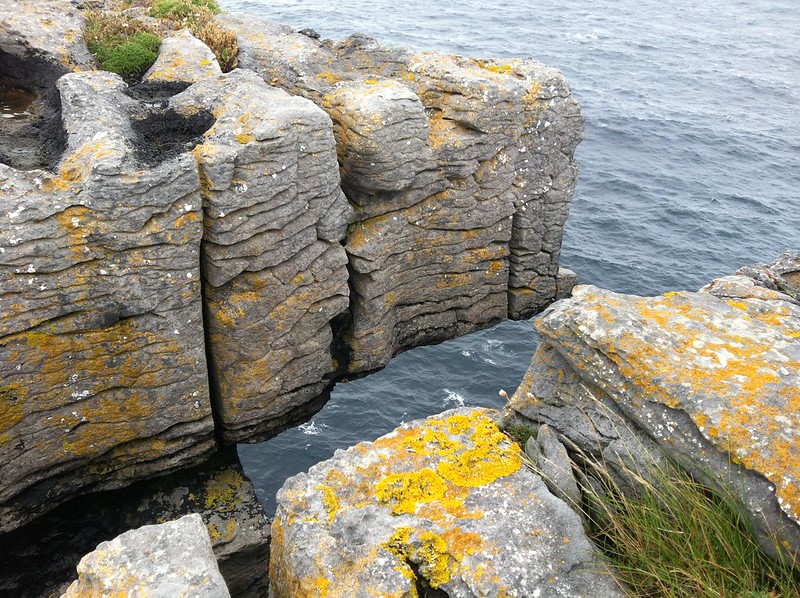 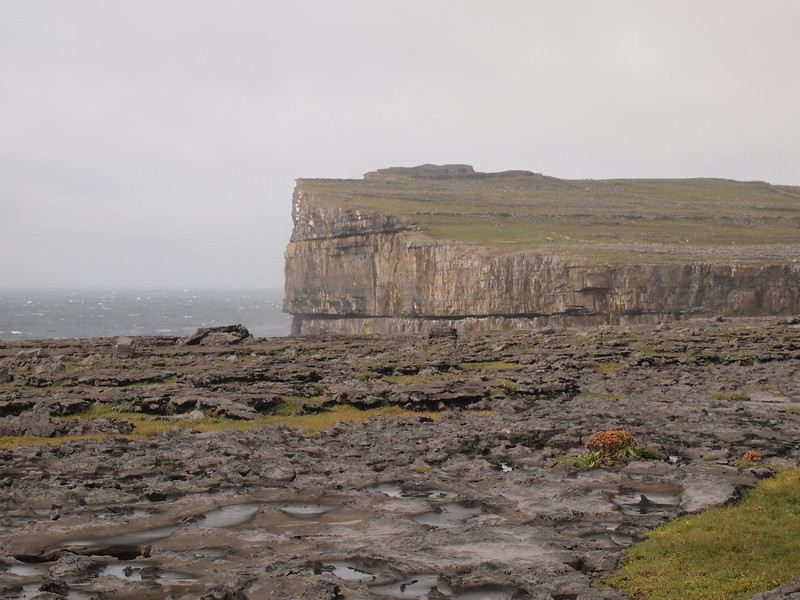 Dun Aonghasa can be seen at the top of this cliff. It is the one of the most important prehistoric forts on the island and a UNESCO world heritage site. It is basically a very very old fort that is thought to have been used since 1100 BCE.

We also discovered that an entrance fee was actually being charged for people entering Dun Aonghasa, but the point at which they charged travellers was down below. But because we had come from a more ‘extreme’ walk along the rocks and strong winds and then climbed over a low rock fence to get into a well-worn path covered with many tourists in hiking gear, we slipped through without passing that checkpoint. I find that it is a very curious thing to fence up all the rocks and set opening and closing times – we saw the same thing being practiced at Stonehenge. It is baffling because I think me and George operate more along the lines of the “let’s walk in this direction until we find the rock” sort of manner, without care of the “opening or closing time of the tourist attraction”. The rocks on this touristic path were rubbed smooth and very hard to walk on, unlike the rough rocks of the rest of the island. 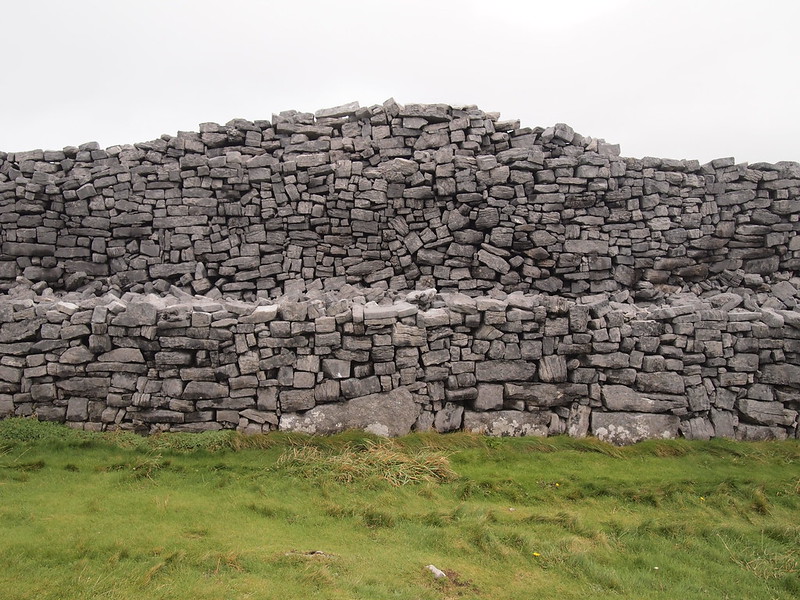 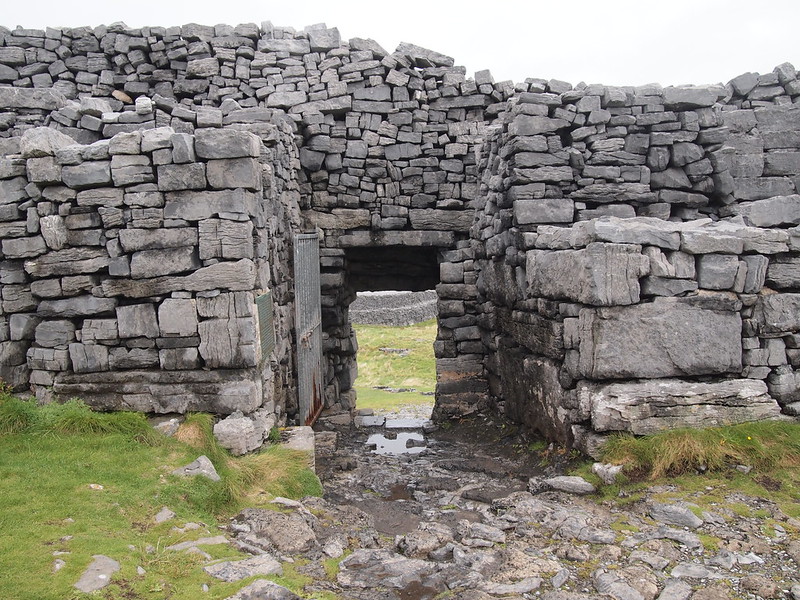 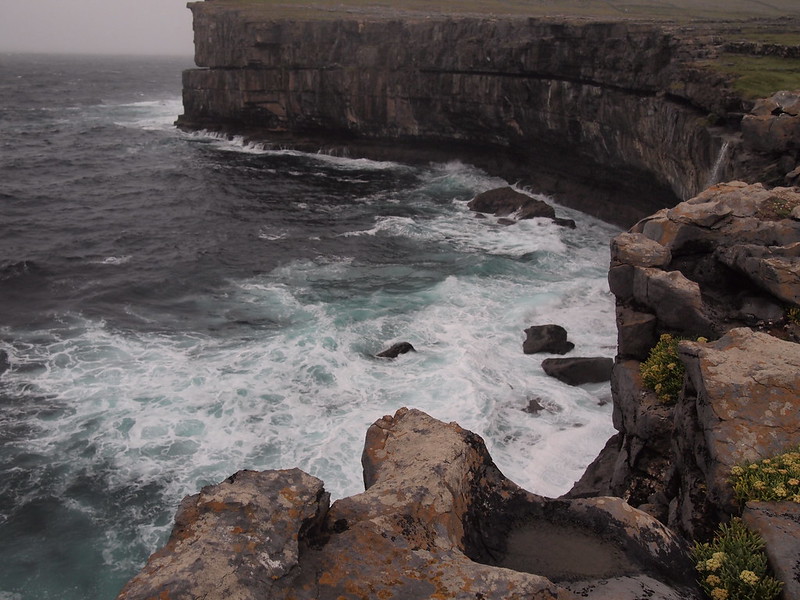 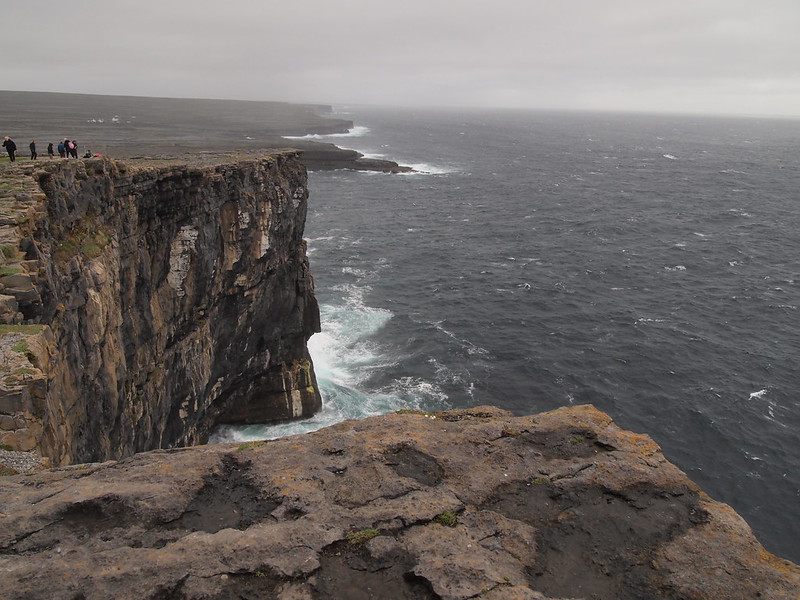 The view from Dun Aonghasa 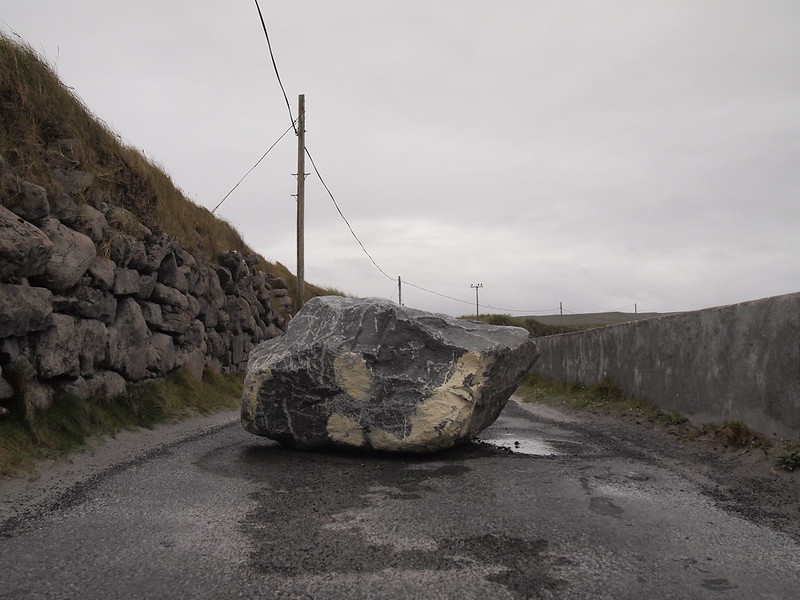 Finally I wanted to add that we found a large rock that had been intentionally placed on the road to stop cars from driving down it as it is used by children frequently. Not a glacial erratic, but I love how it has been placed there with a purpose, on a road. How lovely, to imagine a place where they put a rock to block up the road so that cars won’t drive up and down it, so that people can walk on it freely!

I’ll stop here for now but… NEXT UP: The plants and wildlife of Inis Mor!

63 floors up in the sky and on the rooftop of One Raffles Place is 1-Altitude. Naturally, with…
Debbie Ding
Uncategorized

Yesterday, a strange incident occurred here in Stamford Hill. It was somewhere after midnight when there was suddenly…
Debbie Ding