While growing up as a child, some of the first few albums I got in my life were that of Traditional Irish music. This fluke occurred because the first CD that I “randomly” picked out at CD-Rama was an Enya CD called “The Celts”. From there it was a slippery slope down into buttons, bows, irish reels, Riverdance, Michael Flatley, and even wanting to learn to play the tin whistle and the violin and the bodhran. I drew celtic knots into everything in my free-time. I learnt the words to many irish songs and could sing “A Song For Ireland“! If you had asked me, I think I would even have said that I wished that I was Irish at that point (although at that point I had never lived in any place other than Singapore before).

The music seemed to match my childhood interest in fantasy novels. My early reading habit was spurred on by science fiction and fantasy novels – historical fantasy or epic volumes of “high fantasy”. When we were around 12, me and some friends around me had a small book club called “SFantasy” (SF and Fantasy, apparently). We read authors such as Raymond E Feist, Margaret Weis and Tracy Hickman, Mercedes Lackey, Anne McCaffery, A. A. Attanasio, Melanie Rawn, Robert Silverberg, etc etc – and joined the hordes of bookish kids who were trapped in the cycle of acquiring and reading tediously long series of books, such as The Riftwar Saga, Death Gate Cycle, Dragonlance, Forgotten Realms, etc…

Eventually, as I grew into my teens, this interest in Irish Music and Fantasy novels began to coalesce in an interest in gothic metal and literature. Firstly, perhaps because that’s how a moody teenager’s musical taste changes over time, and secondly because I was actually still reading the lyrics to songs, and it seemed to me that you didn’t find this sort of articulate, fantastic, and ridiculously convoluted storyline in other music.

Some of my old favourites:

On Thorns I lay – Crystal Tears

Within Temptations – The Other Half of Me

They really take the performance of music to whole new level – music is performance and should be treated as such! Dressing up! Painting your face in pallid colours, inventing personas and creating lives for these characters! Inventing rituals to enact on stage! And as anachronistic as it might be (to speak like you were a English character from the 19th century), I find that it is still essentially an attempt to write new stories inbetween the gaps!

Soundwise – I love it too. I think they also understand that sound is also about contrasts. Although it is more or less a normal “format” today, at that point when I first encountered this music, I felt that this particular kind of music where they contrast female soprano with male growling was the perfect marriage of contrasts, as well as the great effect of contrasting classical music with modern rock or metal instrumentation.

Similarly, I enjoy some noise music but I feel strongly that without the contrast with silence (ie: the intentional absence of sound), noise is boring. So a really brutal or punishing track does not make it for me. It is not the extremities that interest me so much as the amount of distance between the “softest” parts and “hardest/loudest” parts.

I would say that any approach which plays with contrasts and introduces unexpected sounds to any original given “format” in an intelligent fashion is more interesting to me than a consistent sound throughout a track. The same can be said of albums. I am more excited when an artist produces an album that sounds like a completely different artist on every single track – or even like a completely different band within the same track.

Video of Magma
(singing in their made-up language) 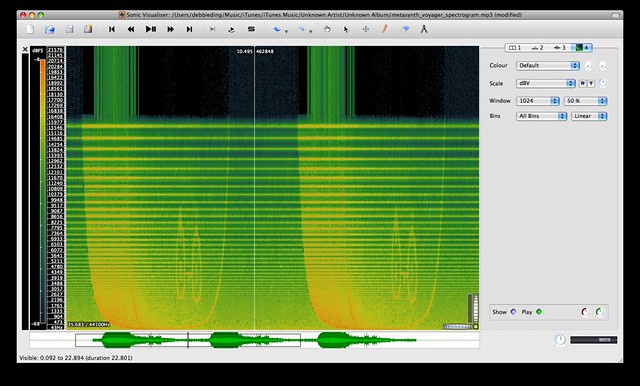 Yesterday, me and another italian artist who has just arrived at Centre Recolléts made a epic NINE HOUR…
Debbie Ding