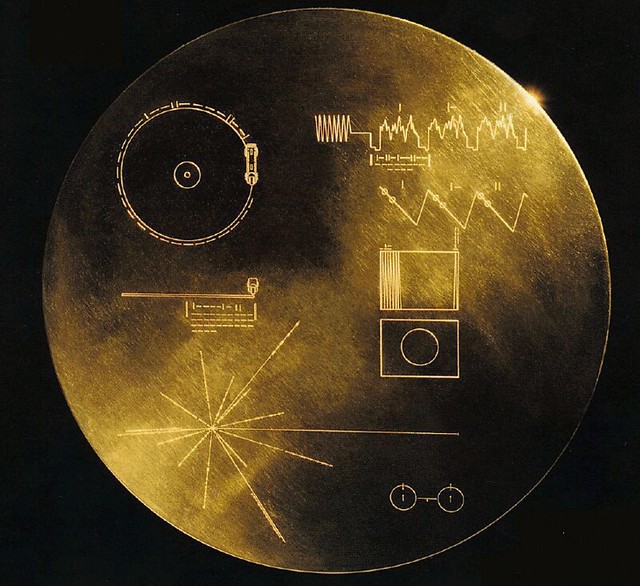 The Voyager Golden Record was a phonograph record that was sent out along with the Voyager spacecraft in 1977, with a selection of images and sounds that were supposed to let intelligent extraterrestial life understand what humans were like. This is the cover of the record, which shows a diagram of how the phonograph record works and how it is supposed to be read/played back. 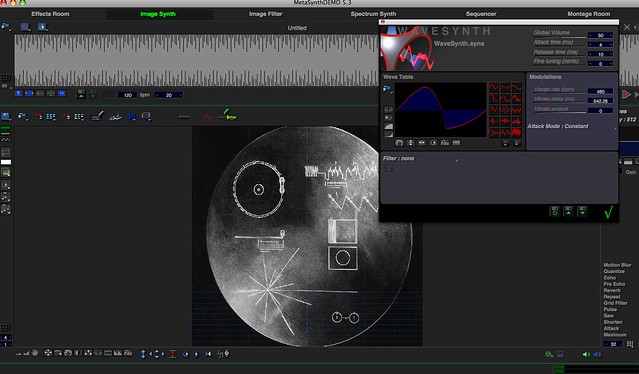 I ran it through MetaSynth to see what it would sound like. MetaSynth is a brilliantly made and well-documented application that many have used as a tool for generating and sculpting sounds from images and this idea is not anything new (famous examples being afx’s windowlicker and venetian snares’s look (from songs about my cat). Surprisingly, right out of the box, the circular curve of the Voyager’s cover produced a futuristic sound, not unlike what you would expect to hear in a scifi film.

This is what the waveform looks like. But with the free sound editor Audacity (available for both mac, linux, windows and other platforms), you can also view the sound spectrum. 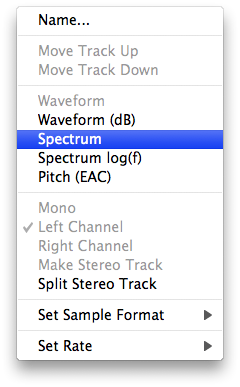 Right-click the title of your track to see this additional dropdown menu.

This is what the sound spectrum looks like. You can see the lower half of the golden record’s image appearing in the spectrum. This spectrum represents the spectral density of the signal. Similar spectrograms are also generated and analysed in the fields of radar/sonar, speech processing, and in seismology.

When the Voyager was sent out, then-US president Jimmy Carter’s message was as follows:

We cast this message into the cosmos. It is likely to survive a billion years into our future, when our civilization is profoundly altered and the surface of the Earth may be vastly changed. Of the 200 billion stars in the Milky Way galaxy, some — perhaps many — may have inhabited planets and spacefaring civilizations. If one such civilization intercepts Voyager and can understand these recorded contents, here is our message:

This is a present from a small distant world, a token of our sounds, our science, our images, our music, our thoughts, and our feelings. We are attempting to survive our time so we may live into yours…

The Voyager’s message was not sent out for anyone in particular, and there is no certainty that any intelligent life will ever encounter it or have the intelligence to decode it. So why did we still send out the Voyager?

Before the telegraph and telephone and the internet and everything, we might equate writing to being an “artifact” or by-product of our verbal communication. But the forms of communication get more and more complicated, the nature of communication is changing. According to Derrida, all forms of discourse are “telecommunication”, in that they are predicated on the possibility of the radical absence of both the producer and the receiver of the communication.