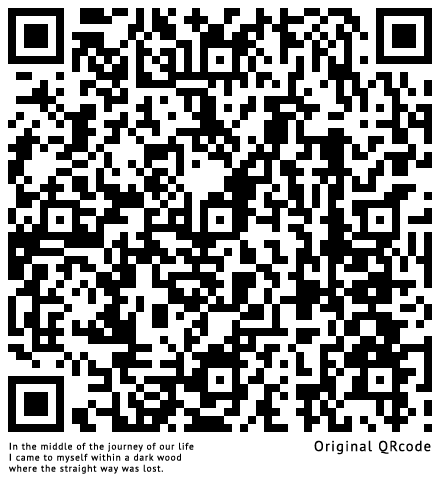 From Dante’s Inferno:
“In the middle of the journey of our life
I came to myself within a dark wood
where the straight way was lost.” 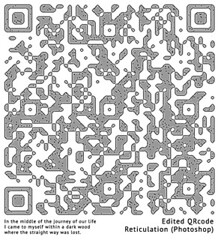 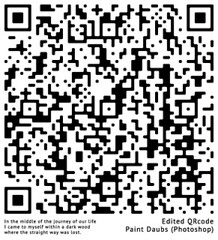 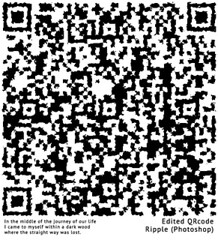 Running some simple, random photoshop filters on qrcodes as an experiment. All these codes work when scanned.

Of note: a filter I had never looked at too closely before – Reticulation. Reading up on it more, it appears that it is actually a term that comes from film photography. During the process of darkroom processing, due to different temperatures or chemical combinations, sometimes the thin layer of emulsion would stretch or shrink at a rate different than the glass or cellulose-based support, causing “termite-like trails”. Apparently photoshop simulates this with termite trails and an image that is lightly grained within its highlights. Density, foreground, and background levels can be set.

Since I never really worked with actual film emulsion (or in a darkroom) in my entire life, I never had knowledge of this “reticulation” effect. I suspect that the average layman will have no idea what this effect is supposed to look like, or how it was originally generated – for example, I don’t think that many of my students would be familiar with even the slightest notion of film photography. The other day in school we had an encounter with a disposable film camera tied to a pillar, but it seemed that all of my 17/18 year old students had never seen a “wind up film camera” before, so I had to explain to them how to use and wind up a disposable film camera! Incroyable! Despite going digital once digital cameras reached the consumer market, I also had a number of cheap manual windup cameras which I scavenged from the CashConverters and Salvation Army here – simply I couldn’t afford a fancypants DSLR and this was the only way I could buy and play around with cameras. The effects that came back were… experimental to say the least. As with all cheap plastic cameras there were light leaks at times and sometimes the film was not wound up correctly. I sometimes accidentally made double exposures and the flash went wrong sometimes. It is always surprising to see the ridiculous prices on plastic cameras today such as the LC-A and Holga (or even the digital hipstamatic equivalent of vintage lenses for iPhone and other devices). I am slightly sad to think that children today might not all have any experience with playing around with film – for me, even if I’m not involved with every step of the film processing, I do try to be aware of the process. Whereas digital processes sometimes erase the need for skill or understanding. Simply pulling some slider along in a dialog box is not the same as having to understand what it would take to obtain the right effect…

But back to the main story. From what I can read on the internet, Reticulation is something that is difficult to produce with film emulsions today as they have been specifically made to withstand even the sudden and dramatic change in temperature that would once have forced the emulsion to expand or contract, causing parts to cluster or clump together in a strange “network” pattern (or “ridges and valleys”).

So why did they invent a digital version of a filter that actually mimics an effect that would actually be destructive to the film or be considered an error when developing an image? Well, it seems that reticulation was actually considered “trendy” or “arty” at one point. I guess this is similar to my own interest in compression artifacts. Maybe we could say that a particular format or medium has finally “come of age” when its users start fetishising its “nostalgic” imperfections as art.

Reticulation as a word also means “to mark with lines resembling a network (for decorative purposes)”. I think… this could be my new favourite word.

Everything looks more cinematic with letterboxing