I just did the Unity Certified Associate Game Developer exam and passed it. Aight, I know this is probably going to sound like a HUMBLEBRAG but, I am writing this post because I was originally pretty apprehensive about taking the exam. Although I’ve used Unity for several years, I wouldn’t describe my job role as a game developer. So I worried that what I had done before wasn’t good or “professional” enough. Before the exam, I also furiously googled for people’s accounts of how they studied for it, what exactly they studied, so in case there are others who come after me who are doing the same thing, I thought I’d add a description of my experience and what I did to pass!

I know that the Unity Certified Associate is considered the “entry-level” certification, but even if its the entry-level test, it still needs some studying! Besides my artistic endeavours (which this blog is mainly about) I actually work a full-time job (and not as a game developer), but Unity happens to be something that my work would like me to focus on a bit more. But it is actually a very intense few weeks at work – in addition to which I am also having to care for a very demanding toddler + working on several personal projects on weekends, so this meant I was very busy and only really able to eke out a little bit of time for studying.

Now, the title of this post is a little click-baity, but it is true. Recently it so happened that I re-installed Rescuetime, so I am able to definitively tell you exactly how long I spent preparing and “studying” for the exam from start to finish!! No more handwaving or vague estimations, I can actually tell you that in total, I spent exactly:

38.5 hours preparing for the Unity exam:

32 hrs: Attending a Game Developer course. I decided to sign up for and attend a course with fixed hours and a human instructor so it would formally “block” out time in my calendar to study Unity. I could have done it online on Udemy or Coursera or something like that, but attending it with real people also gave me the pressure that I had to finish the course, and I also could hear the sort of questions that new users ask (useful for someone who intends to teach it). Since it was formalised as a course I had to attend for 4 weekends, I asked my parents to help with childcare (thanks mom and dad!!!) during my course hours, so I could really dedicate the time to studying Unity and asking the instructor all the questions I ever had about Unity. I should add that at the point I took the course, I had several years of experience of casually using Unity already, so the material was generally very simple for me but I really appreciated having someone tell me what was the OFFICIAL way to do things. I’ve been anyhowly doing things for a long while (because I was self-taught but in a very disorganised way) and the instructor Siang Leng showed me many quick fixes for things I had been doing in very weird ways, so this was very enlightening to me.

For me, my intention when I take a course like this is to eventually reach the level that I could teach the subject, to be able to explain in detail the semantics of the user interface of the program, to understand everything about how the formats are encoded and used, and for me to I fully understand the processes from start to finish and do it in my own way, instead of just copying what the instructor is doing. I like to think that my capture rate (rate in which I absorb what instructor says) is very high, if not 100% at this point. Once I am shown how to do something, I will go and make sure I can do the task myself, and I will screenshot or even make a screen video of myself doing the task on my own after the instructor does a demo, and I immediately publish this to my own wiki (my ‘Second Brain’. In forcing myself to document everything this way (to be able to use my own demo to teach others), I am pretty sure that I… have more than accomplished the “lesson objectives”.

3.5 hr : Completing all the quizzes on the official Unity Courseware. When I did the course, I was given access to the official unity courseware on gmetrix. Now this courseware is the one for the “zombietoys” project that I vaguely remember trying out yeaaaaaaars ago when I first started using Unity. Not that I ever completed it. A lot of it seems very outdated, as it was done on Unity 5.something. But I decided to do the quizzes at the end of each section. If I got a section mostly wrong, then I went back to watch the video for it (at 2x speed, of course). I think I breezed through the first 10 chapters without getting quizzes wrong, then the second half was the stuff I clearly wasn’t so familiar with, things like Animation and Audio.

3 hrs :  Mock exams. I had access to a special 400+ mock exam question bank prepared by my course provider, like a kind of “ten year series”. To be honest, I didn’t have that much time, but at the barest minimum I decided that I would go through every single mock question once. I checked each question as I did it with the answer key. I did some of this whilst breastfeeding Beano with a split screen on my phone, however, I quickly realised that studying on my phone wasn’t the most ideal for certain sections because I really ought to have just done it with Unity open in front of me.

As I went along, I googled each section on the Unity Manual, googled any words I didn’t understand, opened up Unity and used the feature to build a test file. In Unity, I created every single possible asset once, created every 2d and 3d component once. I made handwritten notes as I went along, and later I also ‘revised’ from these notes by highlighting key words.

I asked my colleague (Unity guru!!!) for areas he thought I should revise and he mentioned a few areas that I realised I was less familiar with – Animation, Audio, etc. So I tried going through the motions of creating the animator, setting up some audio mixer groups, trying out every single type of light with all the different shadow settings, making different particles, etc. 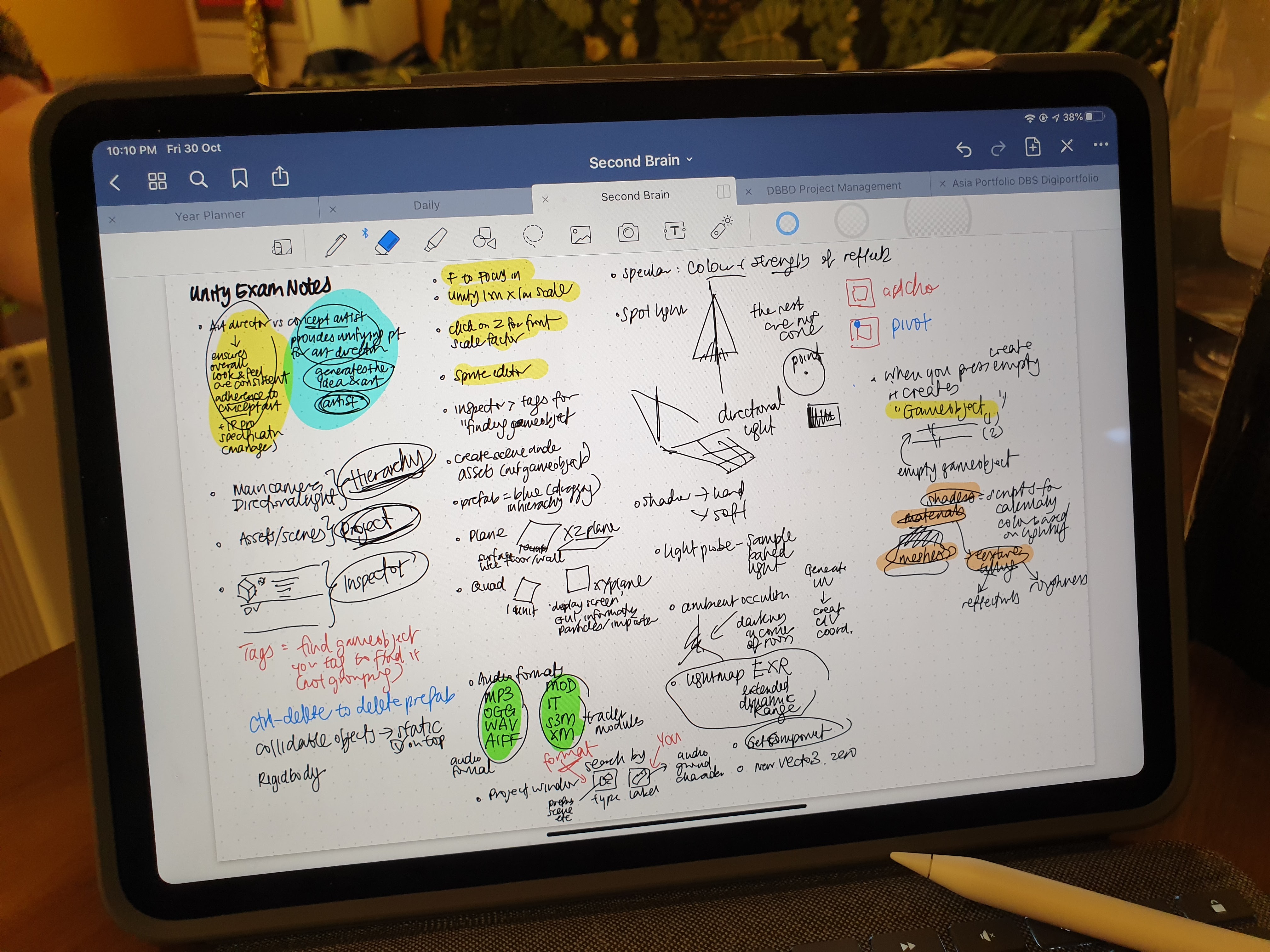 I am glad to say that the outcome was, better than random! 644/700 means that I should have scored about 92/100, so yeah, I’m happy with that score. It was on the whole easier than I had expected, but I might have been lucky with the draw of the questions. I recognised several of the questions and topics from the official courseware / mock tests. The time (90min) was more than enough, I sped through it once and finished it within 40 minutes, marking all the questions I was not sure about for review and then I used the remainder of the time to check the ‘mark for review’ question set twice through, unflagging them as I made up my mind about the answers. Then after having checked it as best I could, I decided I would submit it (20 min early). (I was very glad to have done it on computer instead of at a test centre which would probably have given me a lot of nerves).

So what does this mean? It means that it is true that the exam is more about your experience and familiarity with the software and scripting. If you are a casual Unity user of several years, it is possible to pass the Associate exam (not professional exam) with basically what is just around 2-3 evenings worth of extra studying (6.5hrs) on top of completing a basic game dev refresher course (32 hrs).

I hope this helps someone else out there trying to decide if they should take the Unity exam and how to study for the Unity exam!

Many thanks to the Dingparents whose help made it possible for me to study for and ace the exam!!